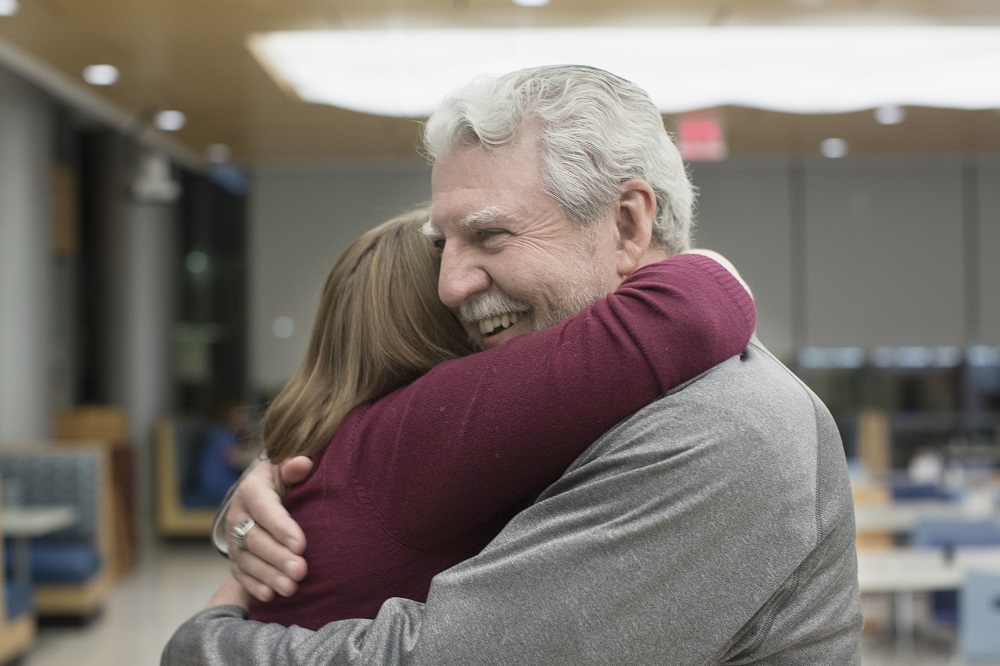 Ed Frederick thanks Dr. Elizabeth Werley for helping him recover from a trauma he suffered last spring.

Edward Frederick plans to retire soon with full use of both legs – something for which he will always be grateful to staff at Penn State Health Milton S. Hershey Medical Center, and he wanted them to know it.

The Londonderry Township man had just dropped off his wife at the Milton S. Hershey Medical Center for a doctor appointment last spring when he had an accident in the parking lot that caused extreme blood loss.

“I knew I was in big trouble,” he said. “I managed to drive myself to the front door of the hospital, but I lost consciousness while I was being taken in. The next thing I remember was being wheeled from the emergency department to the operating room.”

Dr. Elizabeth Werley, an emergency department physician, oversaw triage care that ultimately saved Frederick’s life. Within 15 minutes of arriving, he was headed to the operating room for leg surgery.

“We were able to do something that we trained for years to do, and our rapid response team worked together so smoothly,” Werley said. “Otherwise, I’m confident he would have died, but that day, we saved somebody’s life.”

Today, Frederick is walking normally, quite the reverse of the initial expected outcome that he would need a leg amputation if he lived long enough to receive it.

If those who saved his life could see him now, he often thought, they would see the future they gave back to him – and how grateful he is for it.

When Frederick heard about “See Me Now,” a program that reunites patients with their emergency department physicians, he didn’t hesitate to participate – and he brought a dozen family members and friends with him to the first reunion in February.

“I talked about what a hard time it was and that the only reason I made it through was because of their skills,” Frederick said. “There were tears all over the place. It was an important time for us to be able to express our thanks.”

The program, made available through a Penn State College of Medicine wellness mini-grant aimed at addressing physician burnout, was the brainchild of Dr. Jeff Lubin, vice chair for quality and patient safety outcomes at the Hershey Medical Center Department of Emergency Medicine, and Linda Gangai, program manager for quality and patient safety outcomes. 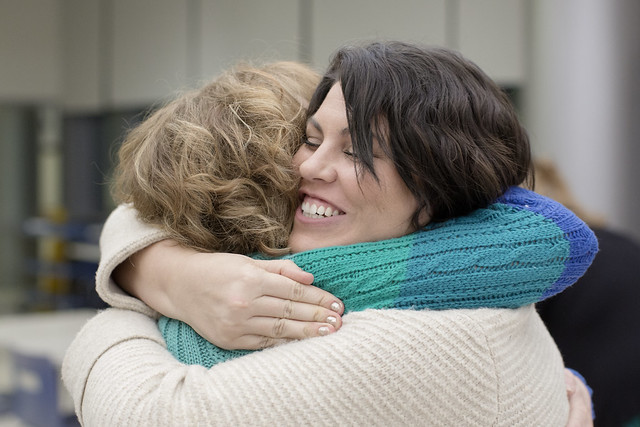 “In the emergency department, patients don’t have repeated contact with the doctors like they do in primary or specialty care because they are either going to the intensive care unit, the operating room or home,” Gangai said. “There’s no time to build that bond or relationship that can be so rewarding, and often doctors don’t know the outcomes.”

As a health care leader in the region, Penn State Health is always working to decrease physician burnout, which affects 60 percent of doctors nationwide with depression, lack of engagement and early retreat from the profession.

Lubin, who wrote the grant proposal, said he was looking for a good way to address the high rate of emergency department physician burnout self-reported in a recent internal survey.

“I thought we should do something to rekindle the spark of why we got into medicine – to help people,” said Lubin, who is also a physician in the emergency department. “It’s good for us, for our patients and for the quality of care we deliver. A patient’s gratitude has great power to remind you why you do all this.”

“See Me Now” caught the attention of the American Medical Association, which interviewed Gangai and Lubin last winter. Other departments within Hershey Medical Center also have expressed interest in the program, Lubin said.

The “See Me Now” reunion involved all staff who helped Frederick, including security guards who tended to him first by using a belt as a tourniquet around his leg to stop the bleeding.

“I didn’t even know he could walk,” said Werley, who dissolved into a self-described “soggy mess” at seeing how good Frederick looked. “We get the occasional thank you, but this was more than a thank you. It was the chance to see a positive outcome and an affirmation that I am where I’m meant to be.”

Gangai is looking for doctor/patient suggestions for another “See Me Now” reunion in June.

After his retirement from his job as a nuclear power consultant, Frederick, 69, plans to take a cruise to Alaska and looks forward to spending more time with his nine grandchildren.

“I realize through my experience that these doctors are under a lot of stress, dealing with all kinds of complications all day, and it’s got to be exhausting,” Frederick said. “They need to see how the story ends because in many cases, it’s a very happy ending.”

Emergency department doctors or patients who want to reconnect for a “See Me Now” reunion are invited to contact Linda Gangai:
717-531-0003, x287210
lgangai@pennstatehealth.psu.edu 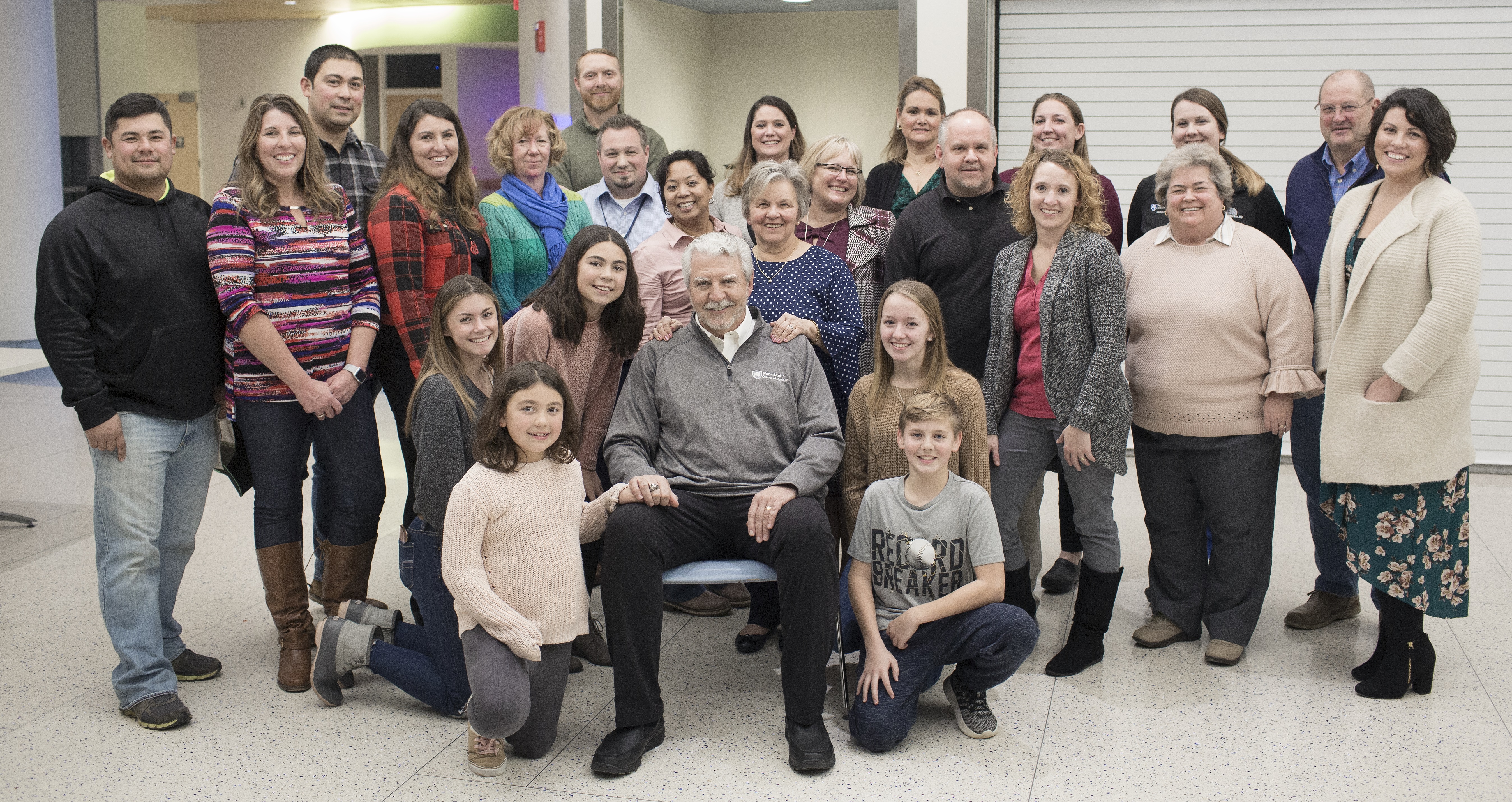 Ed Frederick and his family pose for a photo with the staff at Penn State Health Milton S. Hershey Medical Center.