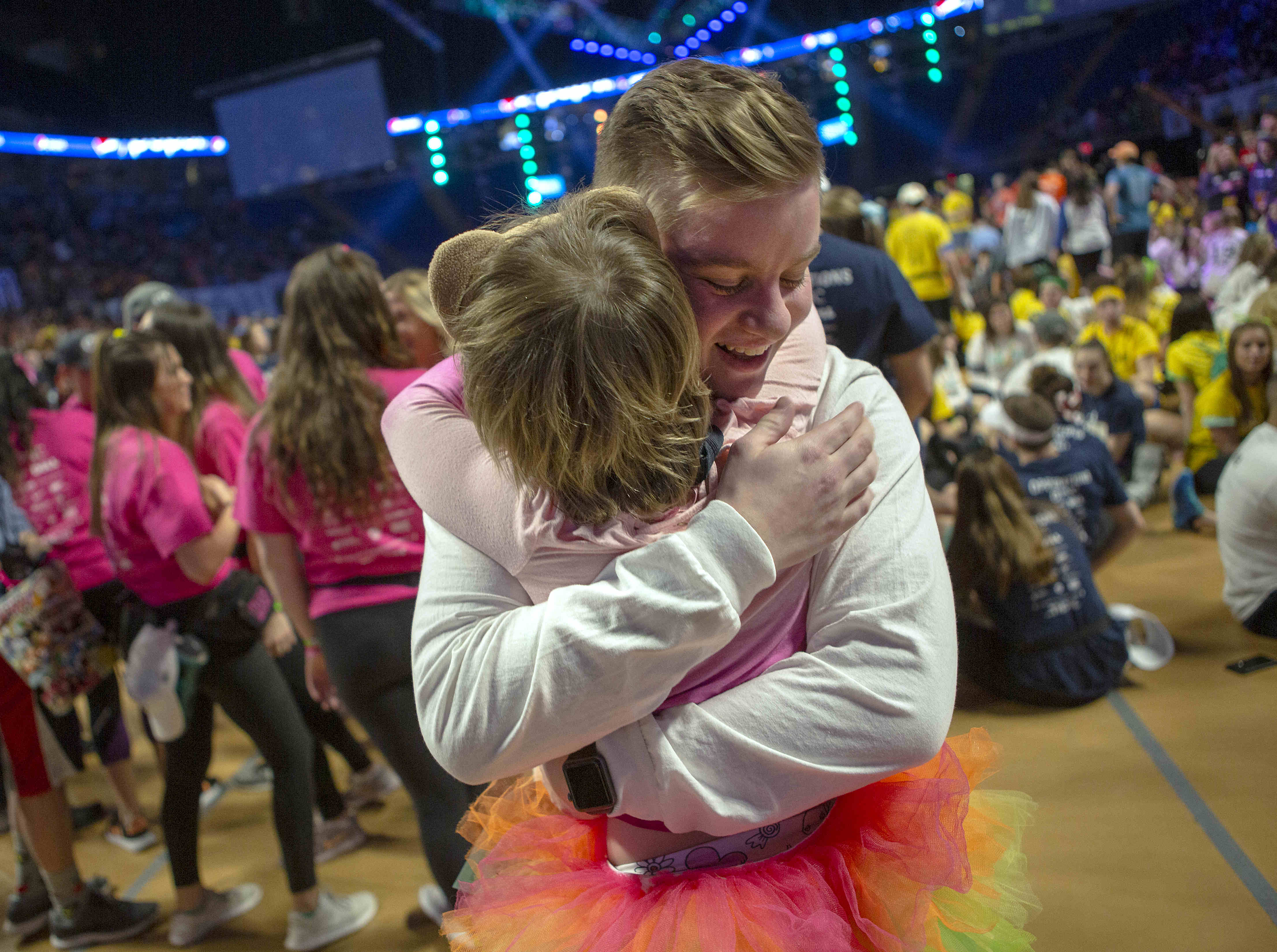 When they meet for the first time amid the swirling lights of THON at Penn State’s Bryce Jordan Center, Michael Palm drops to his knees and wraps his arms around Devin Pulaski.

They are strangers, but both their lives have turned on a fulcrum only survivors like them can understand. One moment, they felt sick. Next came the word “cancer.” Then there was everything that came after.

From Feb. 15 to 17, during the biggest event for the world’s largest student-run philanthropy to support children with cancer and their families, they are crossing another threshold together.

In fact, they’re dancing over it.

“Just be a kid” is Michael’s advice for newbies like 6-year-old Devin minutes before he enters the Bryce Jordan Center. “That’s what you’re here to do. Forget about everything you’ve experienced before this.”

He’s grown up with THON. Fifteen years ago, when he was 6 years old, weeks after doctors told him he had leukemia and his light brown hair was missing from the chemotherapy, he’d gone into Rec Hall for his first THON. The massive crowd took his breath away. He’d hung out with Division 1 athletes – members of the softball team and the football team. He never missed a THON afterward. The event and Four Diamonds, the childhood cancer charity it supports, loomed large throughout Palm’s life.

In the days leading up to this weekend, Michael took long naps, drank lots of fluids and stretched. Now, as a senior at Penn State, Palm is ready to attend his first THON as a dancer.

Outside the Bryce Jordan Center, students line up as a quarter-mile human tunnel through the snowy walkways, up the hill and into the arena, where the crowd is forming, lights are burning and music is thumping.

Nike duffel bag draped over his shoulder, Palm jogs through the tunnel accepting high-fives and back slaps.

In years past he’d helped form the walls of the tunnel, urging the dancers on.

Now he’s going through it. 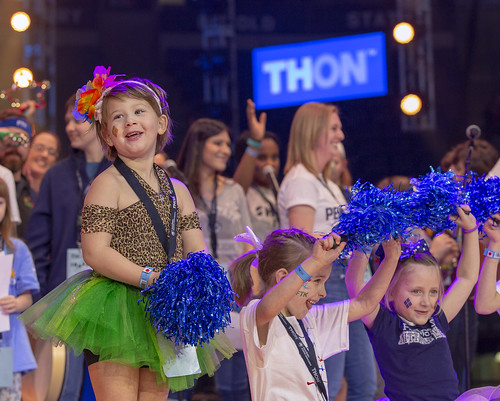 Within minutes of her arrival, Devin does what Devin does – finds a friend. The family drops in at the Penn State All-Sports Museum at Beaver Stadium to pass the time ahead of the dance. Amid the statues and shrines to Nittany Lion sports greats, Devin wanders around with another girl about her age.

Nick is the kind of dad who enjoys Disney movies more than his kids, whose silly faces and goofy jokes make them howl with laughter. Miller, saner — but just as affable, talks easily about the harrowing months they lived.

One day when Devin was four, her belly felt a little funny. Doctors discovered a Wilm’s tumor, a variety of cancer that attacks the kidneys. It was stage 4 and already too large to remove, so doctors took her right kidney.

“You get shown so much support,” he explains, “and now that we’ve gone through the deepest valley and we’re on our way up, we want to show our support.”

Inside the Bryce Jordan Center, Palm jumps and shouts with his friends. In the stands, some wave large cardboard cutouts of his face. Others mill around him on the floor. His parents, Barb and John Palm, are among them, along with his siblings and two nephews.

Throughout the weekend, the family has made arrangements for aunts, uncles and family friends to keep Michael company on the dance floor. His sister, Erin, danced in the event in 2017.

When he arrived at Penn State as a freshman, he joined the Dancer Relations Committee – the teams of students who help their friends who have to stay on their feet stay on their feet. Junior year he became a communications captain, helping to plan the event.

He’s knocked on doors, sold ribbons. Palm and his classmates had raised tens of thousands of dollars – as much as $120,000 his sophomore year. This year, THON raised more than $10 million.

It’s not the track Barb and John thought Michael’s life would take. It led him to this, but Four Diamonds and all the good it’s brought are only part of how Michael’s leukemia changed them.

Their perspective is different. Barb and John say little things no longer upset them.

How did leukemia alter Michael? “He’s such an old soul,” John says.

By the time Devin reaches the Bryce Jordan Center she’s bumped into 15 people she knows.

Nick and Debbi lose her in the crowd, but at THON, among thousands of friends and two years after the devastation of diagnosis, they let their guard down.

She races around the college kids, playing ball and soaking them with squirt guns. Crowds form around her, drawn by her bubbliness, her smile and her eagerness to dive into hugs.

Devin’s energy carried the family through her cancer, Nick says. She seemed to take the diagnosis in stride, handling most chemo and radiation treatments like short timeouts. She had bad days, but the family rallied. Debbi, Nick and little brother Trevor, 2, all have blue eyes. The family motto became “We’re strong. We’re tough. We’re brave. We’re the Blue-Eyed Four.”

When Devin lost her hair from the treatment, family friend Beth Markle  shaved her own to show solidarity.

“She has that piece we all knew was missing,” she said. She’d joined the family for THON, braving her hatred of crowds to play with Devin. “And then when you see her, you’re like, ‘There it is.’” 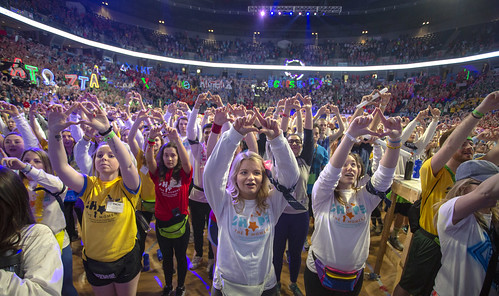 By 1 a.m., Michael’s shoulders are sore. He’s made a wardrobe change. From his duffel bag he’s unearthed one of the eight T-shirts he brought along – this one is black with “Embolden Every Community” on the front.

Joe McShea, Michael’s friend since grade school, wanders out of the crowd. He spends the overnight hours hanging out.

McShea was a classmate when 6-year-old Michael missed a couple weeks of school. When he returned, McShea remembers his friend’s hair was gone. He was accompanied by his father John, who tried to explain to Michael’s class what was happening to their friend.

Michael had had sore lymph nodes. He’d wound up at Children’s Hospital of Philadelphia. John and Barb had felt numb at first. It seemed like a bad dream.

After a few days, they discharged him, and he began receiving treatment at Penn State Children’s Hospital. Early in his treatment, someone mentioned Four Diamonds and THON. Their lives changed.

Eventually, the Pulaskis drive off for a few hours of sleep at the home of a nearby relative. When they return, a chartered van takes the family to ballet lessons. A crowd of survivors Devin’s age learn runway walks and jumps and strike poses in mirrors like dancers at the White Building Gym.

Then they’re off to Beaver Stadium, where more than 300 athletes from a swath of Penn State sports visit with more than 100 families of children with cancer. Devin brandishes a lacrosse stick for photos while the Women’s Lacrosse Team chants “Devin! Devin! Devin!” She turns ribbons into berets with a gaggle of adoring cheerleaders, smacks pucks into nets with hockey sticks and hugs the hulking Penn State football players she’s come to know.

Since meeting a Four Diamonds representative days after Devin’s diagnosis, miracles like these are in regular supply. During her therapy, students visited Devin at Penn State Children’s Hospital. She sang in music therapy. She met Penn State football players. “She and [Head] Coach [James] Franklin are buddies,” Nick says.

But perhaps Four Diamonds’ greatest gift came the first time Nick left the hospital, when a representative told him Devin’s medical bills would be covered — Four Diamonds would pay for anything insurance didn’t.

On Saturday night, the Pulaskis bring down the house down.

During the family talent show, they’re the final act. Devin has invented her own dance to Katie Perry’s “Roar,” which she debuted to the crowd wearing a light green tutu and a leopard print top. The rest of her family shimmies in a row behind her. Her little brother Trevor steals the show. Dressed like Tigger from Winnie the Pooh, he roars repeatedly into a microphone, admiring the hugeness of his voice. The crowd goes nuts.

“Did you see that?!” Nick beams, afterward. “That wasn’t planned! He just did it!”

Palm’s family loves it. “She’s so talented,” Barb says of Devin. Later, she tells her new friends, the Pulaskis, their little girl has a future in show biz.

Michael is in the crowd for the performance. All around him other families’ lives intertwine and connect on ties of tragedy and hope.

One day, Michael prays, the whole spectacle will disappear.

THON, Palm says, is antithetical. You dance at THON so the need for THON will go away.

Behind the Scenes on the Front Lines: Laboratories