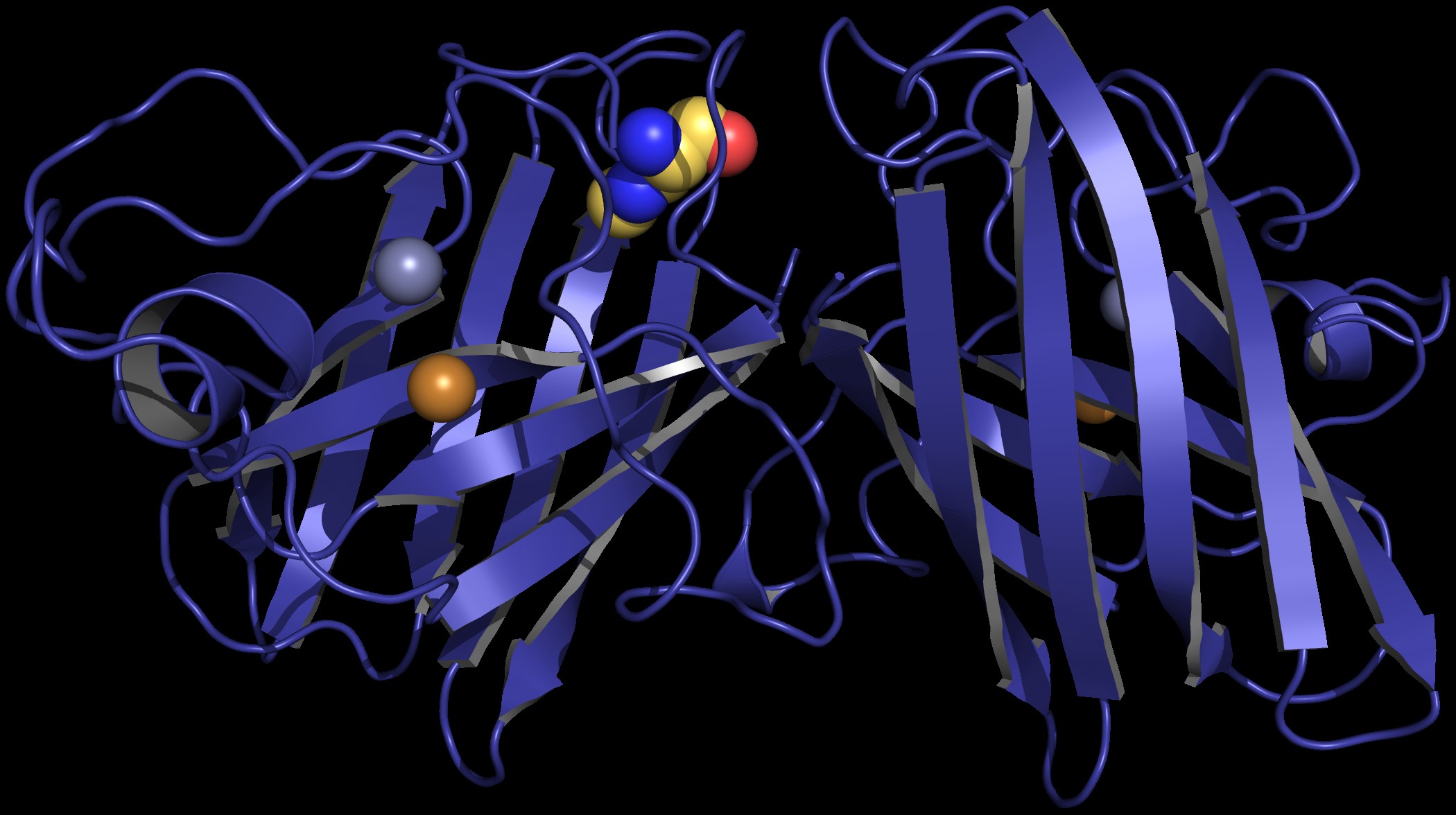 Computer-generated models of proteins can help investigators simulate the effects of changes in their composition.

Can computer modeling be used to explain why an environmental toxin might lead to neurodegenerative disease? According to Penn State College of Medicine researchers, a computer-generated simulation allowed them to see how a toxin produced by algal blooms in saltwater might cause amyotrophic lateral sclerosis (ALS).

The researchers investigated an environmental toxin called β-Methylamino-L-alanine (BMAA) that has been linked to significantly increased occurrence of sporadic ALS in populations with frequent dietary consumption of food sources containing high levels of BMAA — including the Chamorro population of Guam where ALS incidence is approximately 100 times greater than other populations.

The toxin is produced by cyanobacteria, a blue-green algae, and can occur in marine ecosystems. According to the researchers, BMAA accumulates in sharks, shellfish and bottom feeders — so populations relying mainly on these food sources may be at risk.

Elizabeth Proctor, assistant professor of neurosurgery, and Nikolay Dokholyan, professor of pharmacology, used a computer-generated simulation to investigate why exposure to the toxin may lead to the development of diseases like ALS.

According to the researchers, if BMAA becomes part of a protein called copper-zinc superoxide dismutase (SOD1), the protein may adopt a form that is toxic to neurons.

Proctor, who holds a doctorate in bioinformatics and computational biology, said the study may be a model for investigating non-genetic cases of ALS, which account for 90 percent of all diagnoses.

“Our results suggest a need for further investigation of SOD1 modification patterns in ALS patients,” Proctor said. “If we can determine the molecular patterns of disease onset and progression, it may aid in the development of lifestyle and preventative interventions for sporadic ALS.”

What eluded researchers was an explanation for why BMAA led to the development of ALS and other neurodegenerative diseases.

In their study, published in PLOS Computational Biology, Proctor and Dokholyan proposed that BMAA causes the protein SOD1 to fold into a form that is toxic to neurons.

Proteins are built using 20 amino acids according to specific “recipes” coded in DNA. Slight changes to the “ingredients” can result in proteins that aren’t able to function the way they are supposed to. Proctor said if enough BMAA is present in a motor neuron that is building SOD1, it may be mistaken for the amino acid L-serine, which has similar properties.

According to the researchers, who used digital modeling to see what the protein would look like with BMAA instead of serine, this substitution critically alters the structure and stability of the protein.

More than 150 mutations of SOD1 have been associated with ALS, but the structural changes from those mutations aren’t enough to affect the stability of the protein, according to Dokholyan, the co-author of the study.

“SOD1 has a higher level of stability compared to most normal proteins,” said Dokholyan, who has a doctorate in physics. “Although many mutations in this protein are associated with ALS, the resulting changes to its structure are not strong enough to cause significant destabilization.”

Serine, the amino acid that BMAA competes with, occurs 10 times in the “recipe” for SOD1. The researchers tested their theory by substituting BMAA for serine in each of those 10 occurrences using a computer program developed by Dokholyan. They observed that BMAA incorporation had detrimental effects to the structure and stability of the protein and caused it to fold, or adopt its shape, incorrectly.

According to the researchers, studying patterns of SOD1 modifications in patients may be useful in developing potential interventions for sporadic ALS. One example of a possible intervention is L-serine supplementation for people exposed to a high amount of BMAA.

Although the study suggestions a connection between two pieces of ALS evidence, Dokholyan says many molecular factors contribute to the presentation of symptoms that doctors see.

“A variety of gene mutations and external factors, like BMAA exposure, are associated with ALS,” Dokholyan said. “If we can figure out one pattern out, it may give clues for how to unlock others.”

David Mowrey of the University of North Carolina at Chapel Hill also contributed to this study.