Stepping away with “many, many thanks,” Brechbill retires 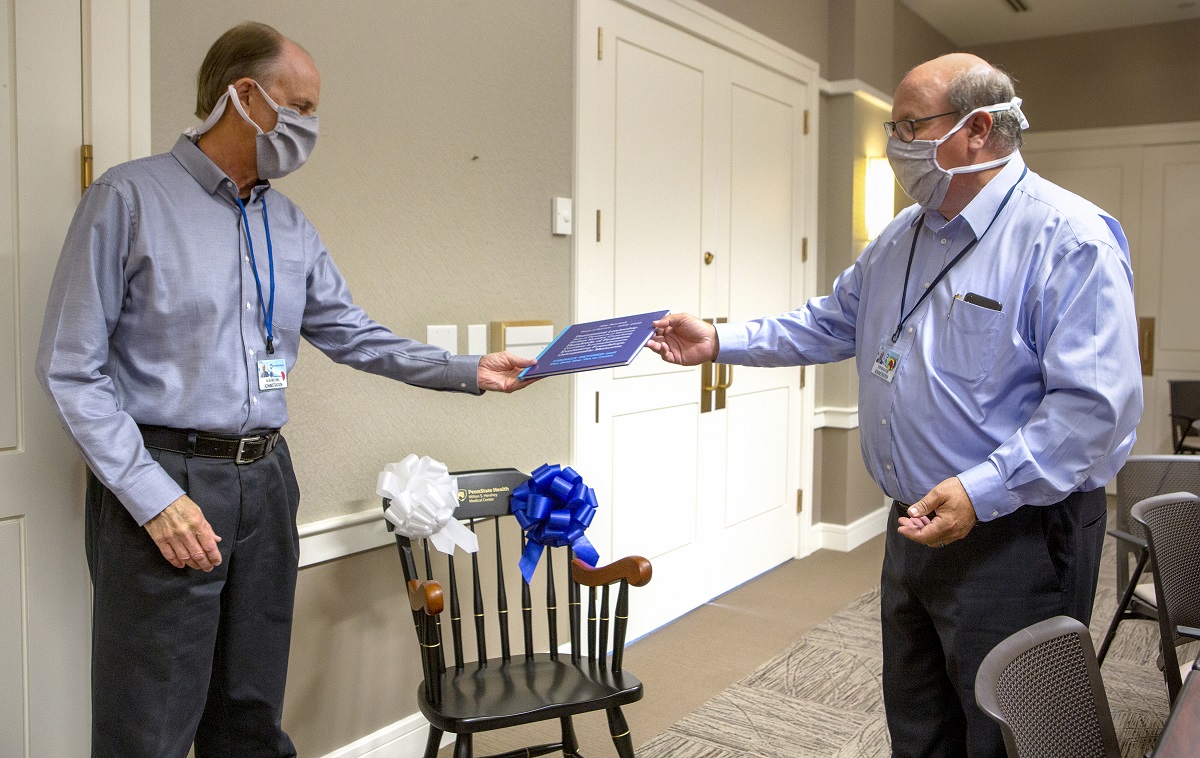 When Alan Brechbill looks back on 14 years of leadership at Penn State Health, his proudest accomplishment and what he will miss most are the same: People.

“Fairly early on in my time here, the recession hit and we were able to maintain our workforce without any layoffs while continuing to grow and prosper,” said Brechbill, who retires from his position as executive vice president of hospital operations on Friday. “Employees weren’t adversely affected, and that meant a lot.”

What also means so much to Brechbill are the personal interactions he enjoys with colleagues and patients, which make this moment of parting bittersweet.

“I’ve been very fortunate to be able to work here, and leaving is very hard,” he said. “It’s a huge transition into the next chapter of life.”

Brechbill has been a constant presence since 2006 – back when the iPod nano was all the rage and “American Idol” ruled TV. Recruited from Thomas Jefferson University Hospital, he came to Hershey to serve as executive director of Penn State Health Milton S. Hershey Medical Center.

His steady leadership brought the Milton S. Hershey Medical Center through the aftermath of a demerger with Geisinger and the 2008-09 economic recession into exciting times of growth and expansion.

Looking back on growth

When he surveys all the growth that has sprung up during his tenure, what stands out is Penn State Children’s Hospital, built in 2013. “When we were planning for construction, we built it in a way that we could add three floors,” he said. “Often those expansions never happen, but we are prosperous enough to be expanding now, and that’s pretty phenomenal for us and for all the children we serve.”

Brechbill was also instrumental in the opening of Penn State Cancer Institute facilities on the Hershey campus, the Support Services Building, the Technology Center, expansions of the Hershey Medical Center Emergency Department and numerous other inpatient renovations. He also played a key role in establishing the Penn State Health Rehabilitation Hospital with Select Medical and the Pennsylvania Psychiatric Institute with then-Pinnacle Health.

“We’ve been able to add more sophisticated, high-level care close-by for people who live here, and that’s very important,” he said. “There’s much more to do, with the opening of medical centers that provide care where people live, which is a tremendous benefit.”

His fiscal leadership was duly noted by Barry Robinson, retired chief counsel for economic affairs, U.S. Department of Commerce, who serves on the hospital board. “I have always valued your judgment and foresight as we planned ambitious projects,” he wrote in a farewell note to Brechbill. “Your strategic advice helped us to steer clear of costly risks encountered by other notable academic health care institutions.”

Brechbill’s business oversight is matched by the mentorship he gave to many employees, including Penn State Health CEO Steve Massini, whom Brechbill hired as chief financial officer for Hershey Medical Center, despite the fact that he didn’t have a traditional hospital CFO background.

“Alan looked past that and ultimately took a chance on me, and the rest is history,” Massini said. “Along the way, he was always encouraging and mentoring me as he has done so many others in his career. I could always sit down with Alan to discuss challenges I was having or ways to improve, and we were always able to have very open and honest conversations.”

Echoed Cindy Lynch, chief of staff, Office of the Dean, Penn State College of Medicine, in a note of farewell, “From the beginning, you have been my mentor as I learned the ropes working in an academic health system. You’ve had an integral role in my growth here, and I’ll never forget your kindness and guidance.”

Deborah Berini, who succeeded Brechbill as president of Hershey Medical Center, said his guidance, advice and example were invaluable to her success in her new role. Lynette Chappell-Williams, chief diversity officer, Penn State Health and Penn State College of Medicine, also credited Brechbill as “a fabulous role model and supporter of organizational diversity, in general, and my success in my role as a leader in advancing diversity, specifically.”

In lieu of an in-person retirement celebration, colleagues and well-wishers shared farewell notes in a memory book that was presented to Brechbill earlier this week.

Clearly touched by the gesture, Brechbill says he has no parting words of wisdom, only thankfulness. “Whatever success we’ve had is because of people supporting us to succeed in our mission,” he said. “To have been a small part of it is a reward.”