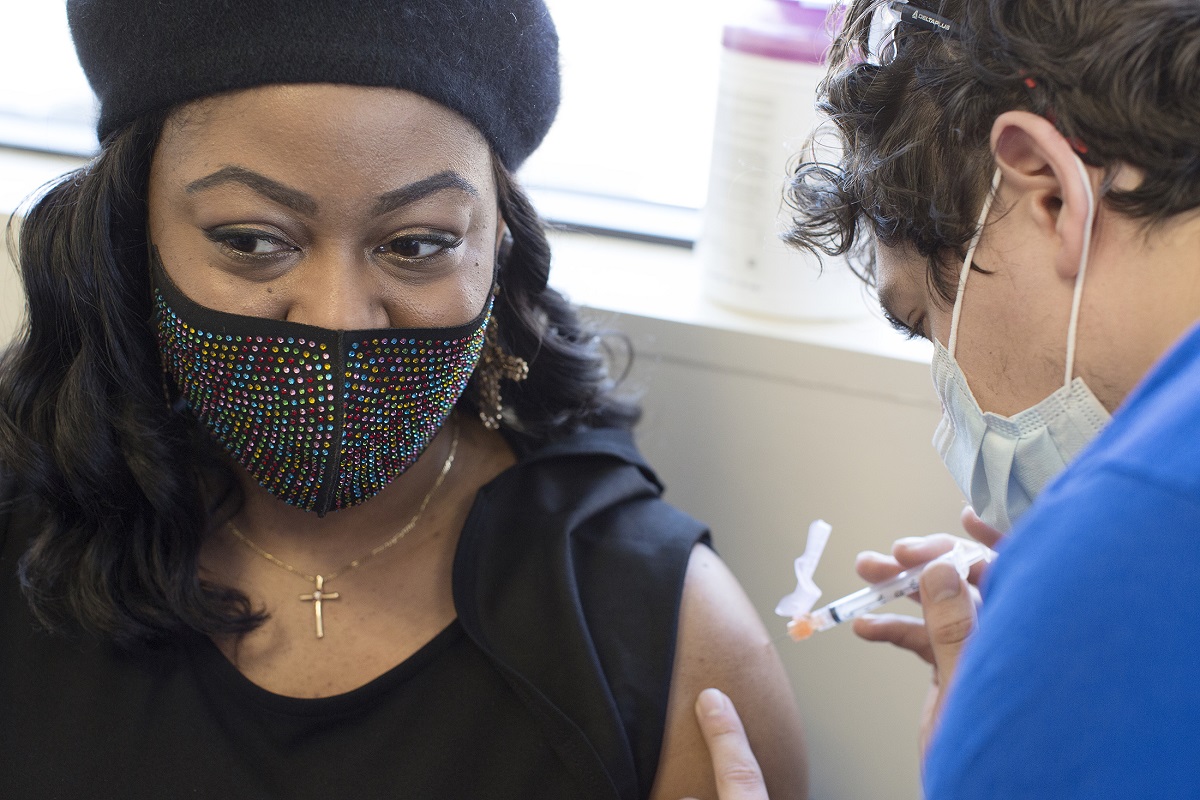 After COVID-19 nearly claimed her life last year, Hummelstown resident Tamika Washington overcame her initial hesitancy about the vaccine and is advising everyone she knows to get it.

Tamika Washington knows her community is skeptical about the COVID-19 vaccine and admits she was too — until the virus nearly claimed her life last year.

The 42-year-old Hummelstown resident was hospitalized for two weeks at Penn State Health Milton S. Hershey Medical Center last May with high fever and respiratory failure due to the virus. A registered nurse and mother of five children, Washington says her case turned around after she was given convalescent plasma.

“I really thought I was going to die. I remember telling the Lord that if he would spare my life when so many others have died, I would become an advocate for those who are scared or need help,” said Washington, who has since devoted much time to educating people she knows about the importance of being vaccinated, especially since African Americans are more likely to suffer serious complications from COVID-19. Because she’s a nurse, she says people in her community seek her out for her counsel on medical issues.

But first, she did her own research on the vaccine, scouring medical journals and using her professional contacts to gather as much information as possible.

“A lot of people say ‘that’s not safe’ or ‘I don’t trust’ based on speculation and misinformation, but I’m here to tell you, medicine can save your life, and any temporary side effect from a vaccine is better than chronic symptoms of COVID,” said Washington, who still struggles with severe fatigue, shortness of breath and increased anxiety.

One of the biggest supporters of Penn State Health’s initiative to reach underserved communities is Dr. Stephen Henderson, a doctor at Penn State Health Cocoa Outpatient Center who spends much of his free time giving both information and vaccinations at pop-up vaccine clinics in the community.

“Look, there’s already a higher incidence of hypertension, diabetes, obesity and chronic kidney disease in this population – and then COVID comes along,” he said. “African Americans are at three times the risk of contracting COVID-19 and twice the risk of death.”

Henderson said his efforts at the pop-up clinics are about much more than the vaccine. “Education is the prevention of most conditions,” he said. “A BMI over 35 is a strong risk factor for worse outcomes. I tell people right on the spot, modify your diet and start exercising. You know what their first question is? ‘Are you taking new patients?’ There is a desire to change once they have the information they need.”

Of course, he said, it helps that he is an African American who is giving them medical advice. “Optics mean a lot,” he said.

Karl Singleton, president of the Pennsylvania Diversity Coalition and a familiar partner to Penn State Health on community issues, is more direct on that point. “You can’t have a pool of white women coming into urban Harrisburg and expect us to listen to them, especially when you have African American doctors who can come,” he said. “There is a long history of misuse and abuse of African Americans by the medical field.”

One of the most notable is the Tuskegee experiment in which 600 Black men were enrolled in a U.S. Public Health Service study on the progression of syphilis from 1932 to 1972 and given placebos, even when penicillin became the recommended treatment for syphilis in 1947. By the time the study was suspended, more than 125 participants had died from syphilis or related complications, and the disease had been passed to spouses and babies at birth.

Then there’s James Marion Sims, a pioneer in women’s reproductive health, who did experiments on enslaved Black women without their consent, and Henrietta Lacks, a Black woman whose cancerous tumor cells were taken without her consent in 1951 – becoming the first human living cell line. HeLa cells, as they are called, have since led to discoveries in cancer, immunology, infectious disease and, most recently, were used to inform research on the COVID-19 vaccine. While some have called for discontinuing use of HeLa cells because they say it perpetuates injustice, others, including some of Lacks’ descendants, want to celebrate her contributions.

While the mistrust is understandable, Singleton works to reach minority groups with vaccine education because the stakes are high. His podcast “A Seat at the Table with Karl Singleton” recently featured a panel of doctors, including four from the Milton S. Hershey Medical Center, talking about the vaccine and why today is different from past history.

“I don’t tell people they must get it – I leave some leeway for choice so they feel they have control,” said Singleton, who received his vaccination at a Penn State Health pop-up clinic at the Allison Hill Community Center in Harrisburg.  Ninety percent of the recipients were from underserved communities. “Many were thankful to get it in their own community, at a place they trust and from professionals who looked like them,” Singleton said.

The Lancaster NAACP, another partner working with Penn State Health, has been doing virtual education on COVID-19 and the vaccine since last summer on its social media channels. “People are receptive to us since we are a grassroots organization,” said Lancaster NAACP president Blanding Watson.

Access—to a computer, to the knowledge needed to make an online appointment, to transportation to the vaccination site – is another roadblock that community and health care partners can address by sharing available resources, he said.

“Systemic and structural racism exist, and the health care system is no different, but I’m encouraged that our partnership with Penn State Health will make a difference, even though there is still a lot to be done,” Watson said. “There’s no quick elevator pitch to this. It takes sitting down, explaining and staying in it for the long haul.”

The good news, Henderson says, is “When you give people the right information in a non-threatening, non-political way, I can’t tell you how many people are ready for the vaccine. So, yes, our efforts are helping.”

Being there: 24 hours with Pastoral Services