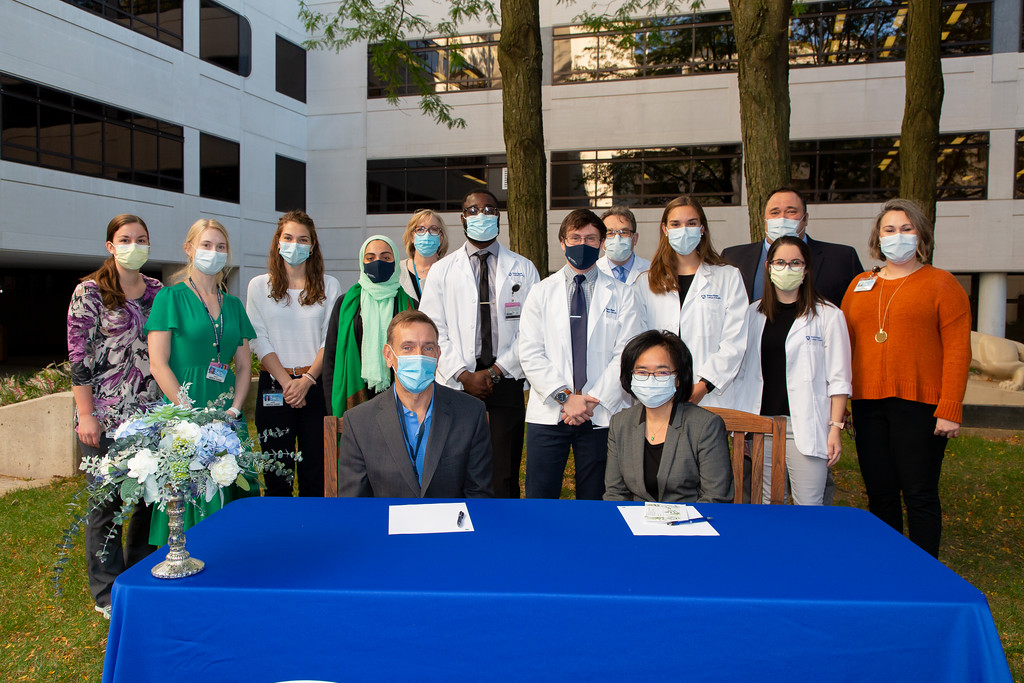 Students in the Penn State College of Medicine MD Accelerated Pathways program will graduate medical school in three years instead of four. On Sept. 29 they attended a signing ceremony.

In response to an impending physician shortage – which could reach as high as 121,900 by 2032 – and rising medical student debt, medical schools in the United States continue to develop and offer accelerated medical doctor (MD) programs, where learners can earn their medical degree in three years instead of four. A recent study by researchers at Penn State College of Medicine found that accelerated pathway (AP) program graduates may be just as prepared for residency training and have less debt than their peers who graduated from traditional programs.

According to the researchers, skeptics of accelerated medical education programs argue that by attempting to compress an ever-expanding amount of medical knowledge and training into three years, graduates of those programs are at higher risk for feeling burnt out and unprepared for residency. The research team said findings from their latest study suggest otherwise. They found that AP students reported similar levels of exhaustion as their peers and that AP students also reported feeling as prepared for residency as their non-AP colleagues from AP schools and non-AP colleagues from all schools.

The study team, led by Dr. Shou Ling Leong, assistant dean for pathways innovation and professor of family and community medicine at the College of Medicine, analyzed responses from more than 40,000 medical students who graduated in 2017 and 2018. They compared reported satisfaction with education and learning environment, levels of debt and burnout, preparedness for residency and career plans between graduates of accelerated and traditional programs.

“These programs have great potential to address physician shortages and rising costs of medical education,” Leong said. “Students in accelerated programs start practicing medicine one year earlier and data from our study indicate that these graduates feel just as prepared as their peers for residency, while also having less debt.”

Ninety of the survey respondents graduated from accelerated programs during the survey years. These students were compared to both students in traditional programs from the same school and also all students from traditional programs at all schools across the country in order to account for any institutional biases. The researchers published their results in the journal Academic Medicine.

In addition to less debt, AP students reported a more positive learning climate than non-AP students and were equally satisfied with their education as their non-AP peers. Leong noted that close mentoring and advising experiences in AP programs may account for high satisfaction in educational experience among those graduates.

The researchers also found that more AP students planned to care for underserved populations and practice family medicine than non-AP students from AP schools, suggesting that accelerated programs are developing physicians in areas that may be most affected by potential shortages, particularly primary care in rural areas.

“Medical schools have a social mission to align medical training with the health care needs of the nation,” Leong said. “By investing in accelerated programs, we are investing in the health of our communities.”

The College of Medicine offers nine different accelerated MD pathways, including in emergency medicine, family medicine, internal medicine, neurology, neurosurgery, orthopaedics, pathology, psychiatry and radiology. They also offer accelerated pathways for MD/PhD students in dermatology, neurosurgery and otolaryngology. Leong and other members of the research team plan to do additional research on the efficacy of AP programs in the future as more data becomes available when AP graduates advance in their careers.