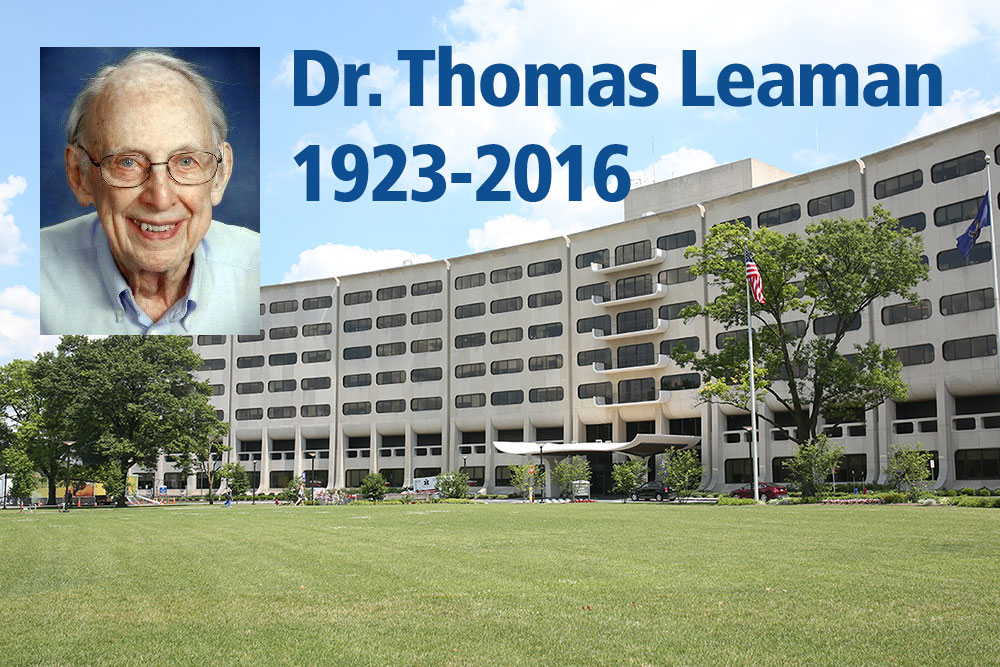 Dr. Thomas Leaman was the founding chair of the Department of Family and Community Medicine at Penn State College of Medicine.

As Penn State College of Medicine's founding Dean Dr. George T. Harrell met with the local practitioners at Hershey Hospital in the early 1960s, the story goes that he laid out three conditions for employment at the soon-to-be built Milton S. Hershey Medical Center.

First, they had to give up their private practices and move their offices into the Medical Center. Second, they had to accept an academic salary. And third, they had to complete a year of training at their own expense working with medical students and residents.

Dr. Thomas Leaman was the only one who agreed.

“The other doctors from town – around 10 or 15 of them – were incensed,” recalled Dr. C. Max Lang, who came to Hershey in 1966 as the founding chair of the Department of Comparative Medicine. “Tom didn't agree right away. Some of the doctors asked Tom to go talk with Dr. Harrell and he made an appointment to do so. Dr. Harrell began to explain his vision where teaching would come first, then patient care, then research. By the time the meeting was over, Tom said he would like to join.”

Leaman, the founding chair of the Department of Family and Community Medicine – the first of its kind in the United States – died Sept. 2, 2016.

“I've known Tom for 50 years and I've never heard a single person say anything unkind about him,” Lang said.

“If patients don't like the doctor, the first person they tell is the nurse – and no one ever gave one complaint to me,” agreed Tillie Stover, who joined him as his nurse when he first opened his medical practice in an office in his home on Elm Avenue in Hershey. “Patients said all they had to do was go into his office and look at him and they felt much better. That's just the type of doctor he was.”

Although he had much to boast about in his pioneering role in family and community medicine, those who knew Leaman best say he looked at things the other way around – how much an honor it was for him to have been given the chance to contribute. Leaman was chair of the department from 1967 to 1987, and again from 1990 to 1991.

To be hired at the Medical Center by Dean Harrell required Leaman's dedication. He formed a partnership with another family doctor who shared his vision, Hiram Wiest, so that they could complete the required additional training. He signed on as a first-year resident at George Washington University in his early 40s, with four children and having been in practice for 17 years. While Leaman was away as a resident, Wiest ran their medical practice and supported both of their families. Then they switched roles every three months. Leaman's training took him to St. Christopher's Hospital for Children in Philadelphia, Miami, Harvard University and, at the advice of Harrell, overseas to England.

“I remember the excitement when the College of Medicine and hospital was founded in our little town and I saw the seven-story building rising from the cornfields,” said Dr. Dennis Gingrich, a physician in the Department of Family and Community Medicine. “Dr. Leaman told his patients that he was taking a job as the new chair of a Department of Family Medicine and that we would be the first patients of the new school. Little did I realize as a teenager that I was participating in the historic event of seeing my doctor become the first chair of a United States academic family medicine department, or that our family was part of the first population of patients of an academic family medicine practice. I still find it ironic that my experience of the transition of general practice to family medicine was as a patient.”

“He enjoyed the helping people part of medicine more than just the science part,” Lang observed.

That attitude is best summed up in Leaman's own words in a 1992 interview in the journal Family Medicine.

“My commitment is service to people,” Leaman said. “To me, it is a Christian commitment. Medicine is one of the ways to do that… I am a serving person first and a physician second. I care deeply about people… I've discovered that I can learn to love the people I dislike the most – if I get to know them well enough. Family practice is a wonderful way to get to know people better, ask them anything, be with them during all kinds of moments. The joy of practice, to me, has been the ongoing relationships, some of which have taken a long time to ripen.”

In 2001, Leaman, with his wife Jeanne, traveled to Uganda to establish a prayer partnership in ministry with people with HIV-AIDS and later he received the Faith and Hope Award for Ministry to Persons Living with HIV/AIDS from the Episcopal Diocese of Central Pennsylvania.

After the death of his wife and companion of 65 years, Jeanne, he forged on with his characteristic enthusiasm for life, learning to yodel at 89 and joining the church choir at 92.

Leaman loved Hershey Medical Center “like another child and cherished his patients, students and colleagues,” Leaman's family wrote in his obituary.

Perhaps the best testament to the effect that Leaman had on the lives of people can be seen in the log of some 300 guests he invited to his 90th birthday party at his home, an event that spanned two days.

“He called me and asked me to help organize a party,” Stover recalled. “I wrote the name tags for each person who came. He asked each person to bring a picture of themselves with their families and he tacked them up on a board.”

Such a reunion she had never seen, she said.

“So many of his patients came. He was like family to me and that's the way his patients felt too,” said Stover, now 87.

To Carol Jackson, his administrative assistant from the time the Department of Family and Community Medicine opened until he retired, Leaman was a second father and a teacher.

“I went to him straight out of business school as a medical secretary when I was 19,” Jackson said. “He really taught me what family medicine was – that you took care of the entire family from the time babies were born to the time of death and you included the family because they impacted who you were. We had paper charts then and they included the whole family so you really knew what was going on a person's life.”

Recognizing her boss's penchant for optimism and seeing the best in every situation, Jackson often joked to Leaman that he looked at the world through rose-colored glasses.

“He would say to me, ‘nah, maybe just pink,'” Jackson recalled.

Leaman didn't set out to be a doctor, according to Lang, who wrote about him with David Jenkins Jr. and John Waldhausen in a book on the early history of the College and Medical Center called “Founders.” He intended to work with his father in the family grocery business until, during World War II, he was called into active duty and an aptitude test singled him out as a good candidate for an intensive pre-med program. He continued his training at Southwestern Medical College and George Washington University, from which he received his degree in medicine. He served as a U.S. Army Medical Corpsman from 1942 to 1946, as an Army physician for the next three years and then began private general practice in Hershey in 1949. He served as a U.S. Army Flight Surgeon during the Korean War from 1952 to 1954 and then continued private practice until 1967.

Gingrich, who was delivered into this world by Leaman's capable hands, reflected on the indelible mark that Leaman left on his life.

“He encouraged me to pursue my interest in academic geriatrics while at the same time expanding my horizons and skills in other areas,” Gingrich said. “He once called me into his office to tell me that the dean wanted to begin a student health service for the school and wanted to anchor it in the family medicine department. Might I like to be the founding director? It opened up more new and rewarding experiences and skill sets, as he knew it would.”

In time, the men's roles would reverse and Leaman would ask Gingrich to be his family physician.

“The honor of that almost knocked me over, and I didn't even realize at the time what a rich new relationship would emerge,” Gingrich said.

Lang saw his friend every week at the University Fitness Center on the Hershey campus, where he would drive himself to exercise.

“I was kind of surprised to hear he passed away,” Lang said. “He was the kind of person who was so good that he should have lived forever.”

Leaman is survived by daughters Rebecca Pratt, of Lititz; Linda Leaman, of Lancaster; Crystal Leaman, of Holt, MO; and Martha Leaman of Hummelstown.

“As I look back, there were times I made a significant difference,” Leaman said in 1992. “There were times when I should have made a difference and didn't. But that's what makes this type of practice, family practice, a fascinating way to live and work. It's made for a very interesting life.”