Sue Espenshade, manager of Volunteer Services, holds a retirement card in the greeting card section of the Gift Shop.

Espenshade first started with the Milton S. Hershey Medical Center at the Rehabilitation Hospital, located in Elizabethtown at that time, after earning her nursing degree at Lancaster General Hospital School of Nursing. There, she worked her way from night shift change nurse to assistant nurse manager, earning her bachelor of science degree at the College of St. Francis while she worked. In 1991, the Rehabilitation Unit moved to the new south addition of the main hospital in Hershey.

“It was a bit of a culture shock coming from a free-standing hospital ‘in the woods’ to a very large clinical setting,” she recalled.

Espenshade always enjoyed working with people, a key component for nursing, but as assistant nurse manager, she spent most of her time doing management and administrative work, and administration training. She decided to make a change and became the Medical Center’s first patient- and family-centered care coordinator in 1998, integrating patient and family insight into operational decision-making.

“It was wonderful to help introduce the concept that families have important insight into the way care should be delivered to their children,” she said of the position.

Already passionate about volunteer work, Espenshade became the co-chair of the employee fundraising committee for Children’s Miracle Network (CMN) and coordinated hundreds of sales events. She made her mark in that position, earning the Kienle Humanitarian Nurses Award in 2000. The award recognizes exemplary care by providers, nurses and medical students.

Six years later, she witnessed one of the most touching moments of her career. She was the family-centered care coordinator in the Pediatrics Unit when the West Nickle Mines Amish School shooting occurred. A gunman killed five girls and injured three in an Amish schoolhouse in Lancaster County. The Amish families, whose children were brought to Children’s Hospital, displayed a trust in God and willingness to forgive the shooter that deeply moved Espenshade.

“They touched my heart,” she said. “I was honored to witness how they reacted to such a tragic experience, and it was rewarding to be able to offer support and comfort to the families.” 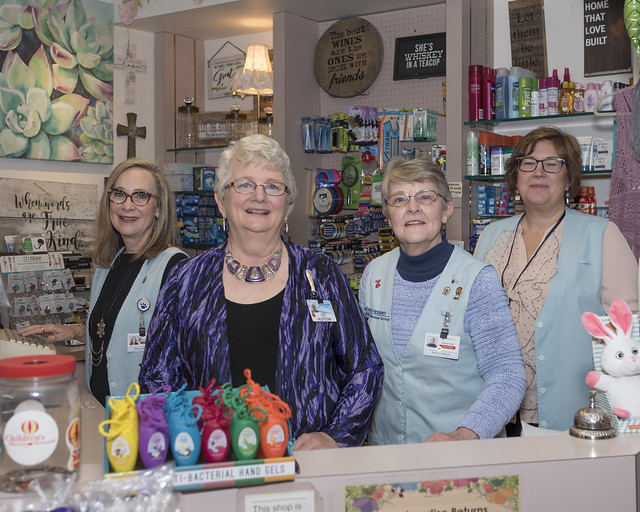 For the last 10 years, Espenshade has been the volunteer services manager at the Medical Center, leading innovative initiatives including the popular Teen Volunteer program and Pet Volunteer program. Despite managing more than 400 adult volunteers and 147 teen volunteers, she makes the job seem effortless.

Steve O’Neill, who has volunteered as a Medical Center tour guide for the past three years, echoes those sentiments. “She’s passionate about the people and the hospital,” O’Neill said. “When she sees you in the hallway, she’ll greet you by saying ‘Hi, friend.’ I’ll always smile when I think of her.

“I remember when I first volunteered, she told me, ‘Find something that will feed your soul,’” O’Neill continued. “I volunteered as a tour guide because of what she said, and I love it. I enjoyed it so much that Sue asked me to join the volunteer advisory board. She’s really guided me over the years.”

Ever humble, Espenshade says she “couldn’t manage the program without the help of the departments.”

Espenshade has conducted major fundraisers for CMN, volunteering at the CMN telethon and directing the annual Tisket-A-Tasket basket raffle fundraiser.

In 2016, the State Association of Directors of Volunteer Services presented Espenshade with the Evelyn Burston Award, given to a director who best exemplifies Burston’s vision, energy and professionalism in volunteer services.

Though she says she won’t volunteer at Hershey Medical Center herself when she retires, she’ll remain an active volunteer for other organizations, including Elizabethtown Community Fair and Masonic Village. She has held positions in the local and state Association for Healthcare Volunteer Resource Professionals, including as treasurer.

“I’ll miss Sue’s positive, can-do attitude, as well as the great relationships she has cultivated among the volunteer team, the Gift Shop, the Penn State Store and throughout the Medical Center,” said Creany.

Espenshade will miss those people, too, but is looking ahead to how she’ll spend her time, including cleaning out her attic.

“We’re the sixth generation to live in our farmhouse. I know there’s stuff up there that I’ve never even seen!”

She’s also looking forward to spending time with her eight grandchildren, who range in age from 8 to 21. “My grandkids are the joy of my life,” she said. “I’m very blessed.”

In her colorful office, full of pictures and mementos, a large poster over her desk reads, “Live a good life. And in the end it’s not the years in a life, it’s a life in the years.”