From One Cancer to Another 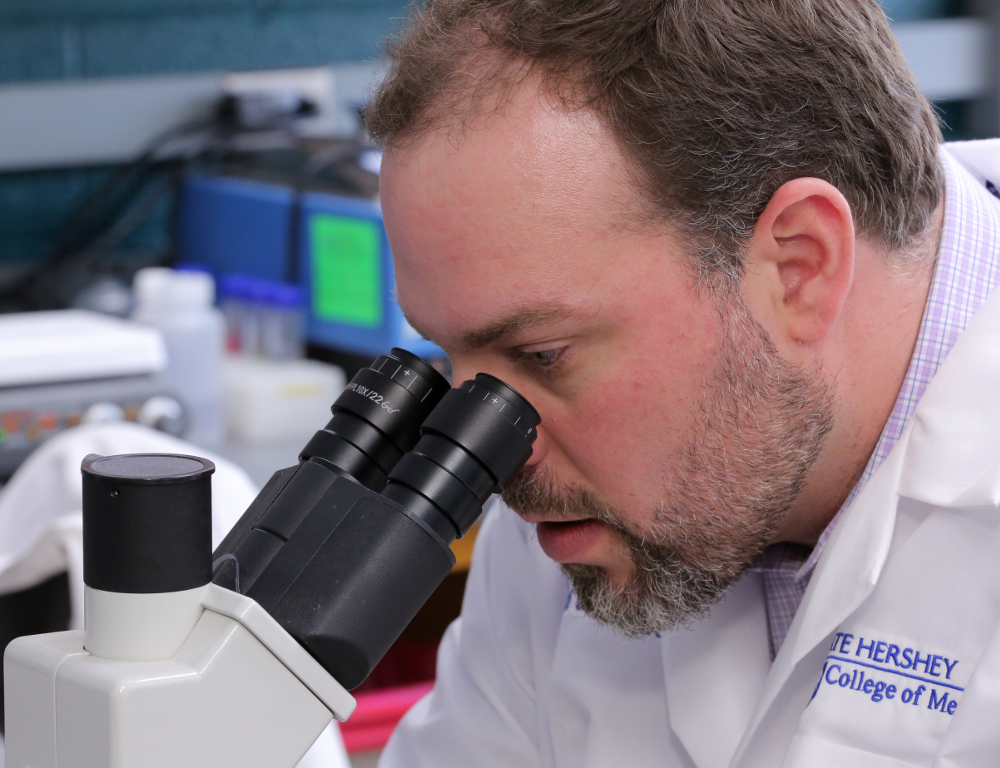 In all of the ways you might think of fighting cancer, perhaps one of the last things on your mind would be to turn one type of cancer into another. After all, who wants to turn a tumor into…a different kind of tumor?

As a 2018 recipient of the American Cancer Society’s Research Scholar Grant for nearly $800,000 over the next four years, DeGraff has big plans for his latest funding. Hear him discuss his findings in this video:

[youtube https://www.youtube.com/watch?v=Q3VORTaOsAA]“If we understand what makes a given type of tumor tick, we may be able to force it to become another type of tumor—something that responds to therapy,” says DeGraff, assistant professor of pathology and surgery and a member of Penn State Cancer Institute.

The theory behind this counterintuitive approach lies in the science of cancer. Each type of cancer—breast, prostate, leukemia, bladder, and so on—has multiple subtypes, controlled by different groups of key factors. These controlling factors are called master regulators.

Master regulators control tumors by managing which genes are used and which stay silent. In turn, the use, or expression, of those genes creates one type of tumor rather than another.

“Each subtype of cancer has a set of master regulators,” DeGraff says. “If you know what they are and can control them, you should be able to make the tumor shape-shift a bit.”

Yes, he’s a scientist who used the term “shape-shift” as a legitimate possibility: a future tool in doctors’ anti-cancer arsenal.

Sitting in the control room

“Hopefully, if you pull out the most important set of levers, the tumor collapses,” DeGraff says. “But I think it’s probably more likely that if you can change the tumor by manipulating it, you can reprogram the tumor to become more susceptible to therapy.”

Happily, this approach has potential applications beyond bladder cancer. In any given cancer, provided researchers and oncologists know how a tumor functions and is controlled by the master regulators, a tumor type that is difficult to treat could potentially be forced into becoming another type of tumor—one that is more responsive to treatment.

In short, starting with a hard-to-treat tumor subtype might not matter much once researchers know how to control the type of tumor you end up actually trying to treat.

The road to the clinic

DeGraff and his team have begun tinkering with the tumors’ controls using a mouse model of bladder cancer, observing what happens when there is too much or too little of the transcription factors, also called over- and underexpression. They also study what these changes mean in human tumor cell lines.

Cue the clinical part of the picture. The road from the lab to the hospital pharmacy is a long one, which bends, loops and inevitably hits a few dead ends along the way.

“The work we are doing at the moment is really proof of principle,” says DeGraff, who serves as the director of Penn State’s Translational Urologic Research program. “It’s early days for sure. The idea, though, is that once we know how to do it in the lab, we can find the mechanism for doing the same thing in actual patients.”

In fact, the process benefits from being a bit circular. It starts with real patients who have bladder cancer. Their tumor samples show scientists such as DeGraff what is going on inside each tumor subtype. Then mice and lab-based human cell lines allow experimentation, helping researchers figure out what happens when each tumor’s master regulators are changed.

Once scientists understand the lab scenarios, they can go back to human tumor tissue to confirm their findings, ask more questions and get new ideas for fine-tuning their research.

“The immediate goal is just a better understanding of these tumors,” DeGraff says. “But the long-term goal is to demonstrate how to target the tumors’ master regulators in real patients.”

Thankfully, some of the master regulators in bladder cancer tumors are already targetable. PPARG, for example, can be targeted in much the same way as the estrogen receptor is targeted in breast cancer. If DeGraff’s research bears out the importance of targeting PPARG in patients with luminal bladder tumors, clinical trials using existing drugs may not be far away.

For other types of bladder cancer, however, treatment options may not be as imminent, and drugs may need to be developed from scratch—a labor- and time-intensive task. That possibility, though daunting, doesn’t phase DeGraff or his clinical research colleagues and collaborators, such as Penn State Health Milton S. Hershey Medical Center’s Chief of Urology Dr. Jay Raman.

“Bladder cancer frequency and severity have been increasing across the United States. Patients are increasingly in need of systemic treatments plus radical surgery to optimize their outcomes,” Dr. Raman says. “However, the responsiveness of bladder cancer to systemic therapies is likely dependent on specific molecular changes in tumors, such as those studied by David DeGraff. In time, his research may enable better identification of the patients most likely to benefit from chemotherapy, as well as pave the way for exploring new targeted therapies.”

Perhaps the surest way of accomplishing the goal of improved bladder cancer treatments is to enter more than one horse in the race.

DeGraff’s publications that helped lay the foundation for his American Cancer Society grant made two important contributions to the field of bladder cancer research. First, they demonstrated that in human cells in the lab, certain types of bladder cancer tumors can be changed from one kind (basal squamous) to another (luminal).¹Second, they showed that turning off a single gene could change the way healthy bladder cells grow and change, predisposing mice to one type of cancer instead of another.²

Together, the research showed that using the control room to turn one type of tumor into another may not only be possible in human patients but may be a reasonable way to transform aggressive or advanced tumors into something more treatable.

As if that weren’t enough, DeGraff and his research colleagues at Penn State also explore ways to predict which patients are most likely to get bladder cancer again after treatment, which happens to as many as 70 percent of patients with early-stage disease.

Though the research is still in early stages, DeGraff hopes to find a useful sign, called a biomarker, in either patient urine or tumor cells that will tell doctors who needs the most frequent follow-up after initial treatment. If the biomarker turns out to be accurate enough, it could even change the way patients are treated; those with biomarkers for a type of cancer likely to come back again and again may get more aggressive treatment from the get-go, for example.

Promise and passion are evident in DeGraff’s current multi-pronged plan to find unique and practical approaches in the fight against advanced bladder cancer. Better yet, he’s not the type to grow complacent.

“The thing I love about bladder cancer research is that there’s a lot of opportunity to make a difference in how the disease is diagnosed and treated and hopefully cured,” DeGraff says. “There are so many ways we can make vast improvements. That’s exciting—when we’re not up against any type of ceiling that we can’t break through. The opportunity for improvements feels endless.”