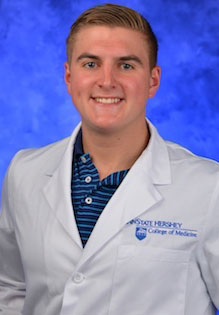 Harrisburg Young Professionals and local news publication TheBurg named a student in Penn State College of Medicine’s MD/PhD Medical Scientist Training Program as part of their “20 in their 20s” list for 2019. This was the first year for the award, which is designed to recognize rising stars in business, cultural and civic life in and around Harrisburg.
January 27, 2020Penn State College of Medicine News

One of the 20 honorees was Gregory Brown, a second-year graduate student in the program. Brown is part of a new Engineering Science and Mechanics MD/PhD offered in conjunction with Penn State College of Engineering.

Brown earned his BS in biomedical engineering from the University of Virginia in 2016 and is completing his research in the lab of Dr. Xuemei Huang in the Department of Neurology. His work focuses on the use of neuroimaging to study how the brain changes in those with cognitive decline due to Parkinson’s disease.

See more about the awards from TheBurg.