Over 45 years of research addresses the science of ‘wasting away’ 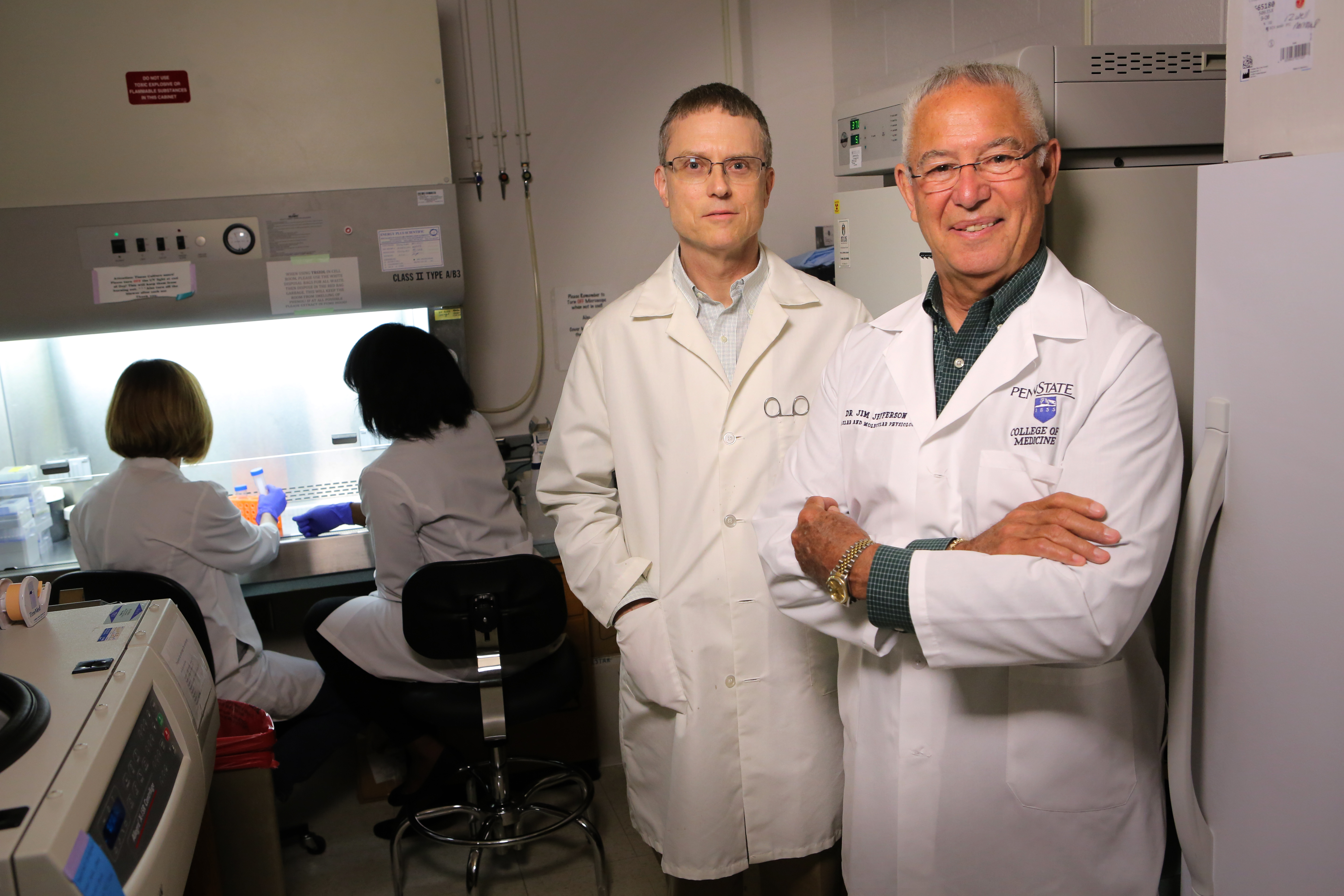 What happens in the research laboratories at Penn State College of Medicine doesn’t stay in the laboratories.

It reaches to outer space, as adventurers blast off in rockets. It affects American war fighters in oven-like desert heat. It touches cancer patients and aging Baby Boomers too weak to rise from their beds. And it even affects the average “gym rat” in the weight room.

In short, anyone who cares about loss of muscle mass has benefited from the painstaking work of Dr. Leonard “Jim” Jefferson and Dr. Scot Kimball. The research of these scientists has delved into the mysteries of skeletal muscle for over 45 years. Recently, the National Institutes of Health renewed a grant of $392,000 to continue their work – one of the longest continuously funded such grants in the country.

Jefferson notes it’s not the amount of money in the grant that matters. It’s the nod from the NIH to keep going. It is ongoing requests for help from heavy-hitting organizations, such as a commercial spaceflight company and the U.S. Army, that affirm the importance of the science.

“We constantly want to see that the research we do has medical relevance. We have collaborators at other institutions where we can confirm it is applicable to the human situation. I view it as opening more and more doors,” Jefferson says.

Understanding Why We “Waste Away”

To understand Jefferson’s and Kimball’s research goals today, you need to dial back in time to 1967, when Jefferson first arrived at Penn State from Cambridge University. His first office was in what is now The Cocoa Beanery coffee shop off Bullfrog Valley Road, and he didn’t have a lab for a year-and-a-half. Jefferson wanted to build upon the research that he’d started during his Ph.D. studies at Vanderbilt University, where scientists were working to understand how insulin acts to control glucose and carbohydrate metabolism.  Initially, he acquired support for his research through an NIH grant focused on liver metabolism that has now been continuously funded for 47 years.

A second area of research interest was ignited when Jefferson came across two photos of a child in the early 1900s suffering from diabetes. The boy had been the first person treated with insulin. In the first photo, the child’s muscles had wasted away. The second showed him after receiving newly discovered insulin injections, and he was healthy and cherubic. It was obvious to Jefferson that insulin was doing something to regulate body mass.

This led Jefferson to prod into why the lack of insulin causes muscle mass to, essentially, waste away. What discoveries could be made to slow or stop that process altogether?

Jefferson says that he first established a perfusion system to prove that insulin acts directly on the muscle to promote buildup of its mass and is not an indirect effect of giving it to the whole person.

He then acquired a second grant from NIH to fund the work on muscle and that grant was recently renewed as mentioned earlier and has now been continuously renewed to today, 47 years later. The initial goal was to identify the “players” in the muscle that were affected by insulin to trigger buildup of muscle mass.

Kimball arrived at Penn State in 1982 as a post-doctoral fellow, with a background in chemistry and bio chemistry. His prior research had focused on the muscle wasting that occurs in people with muscular dystrophy.

Kimball’s project was to identify the “players” that insulin regulated to stimulate protein synthesis. And he also had to figure out why, in the absence of insulin, they weren’t doing the job.

“We identified those players on a molecular level and how they were regulated. Proteins are composed of amino acids, which was known for decades. But Jim’s lab identified an important role for amino acids as regulators – regulatory molecules. I became interested in how that occurred,” Kimball recalls.

An Evolving Study of Skeletal Muscle

During the past four-plus decades, Jefferson and Kimball have pursued questions that have led to even more questions. The mysteries of the regulation of skeletal muscle mass have puzzled scientists for decades. Jefferson found that his questions, which he thought were uniquely his, had in fact been asked by others years before. When one answer was found, another question emerged from that discovery.

“Over the years, our research evolved into an interest into muscle wasting conditions other than Type 1 Diabetes,” Kimball says.

Current research focuses on “disuse atrophy.” This is being funded by the recently re-approved NIH grant. The team is delving into why amino acids regulate – or fail to regulate – muscle during periods when it is not in use. For example, why do we lose muscle mass with a broken leg in a cast? Or, why do we lose it lying in a bed for months enduring illness?

“What happens isn’t just that the muscle is not being used, but it also becomes resistant to stimuli that would normally tell it to become larger and stronger,” Kimball explains. “If you consume a meal with protein, the amino acids will stimulate protein synthesis to maintain muscle mass. But if you have a cast on a leg, it doesn’t.  Why, under these conditions, does the muscle become resistant?”

Of all the 20 naturally occurring amino acids in the body, leucine is the most important as being a regulatory amino acid, Jefferson says. If you administer leucine alone, it stimulates muscle protein synthesis, he says. In fact, that discovery has prompted the interest of body builders as well as nutrition companies focused on supplements to enhance body mass.

“Unfortunately, though, it’s not as simple as that,” Jefferson says. “With disuse, the muscle becomes resistant to further stimulation, and we still don’t understand that.”

“Our most recent studies suggest that it’s not only acting to stimulate the buildup of muscles, but inhibit the breakdown of muscle. And that’s something that has not been sufficiently studied,” he says. “There’s a lot to be learned about the basic concepts that are involved in the buildup of muscle protein and its breakdown. The protein in all cells is in a constant state of turnover, meaning it’s being laid down and taken away at constant rates. So there’s still a lot to learn.”

Real-World Use of Discoveries

All of this lab sleuthing may fascinate scientists, but how is it being applied to real people, in real situations? Actually, that’s why the NIH grants have been funded for nearly half a century, Jefferson and Kimball say. The grants are not for a single project but are based on questions that keep arising from new discoveries.

“So you learn more and more answers, but you never get the full answer to the question as you do fundamental research. You learn more about what you don’t know, but the fundamental question is still the same: ‘What’s going on here?’” Jefferson says.

The lab is training the next generation of scientists, and has had 26 PhD students and 45 post-doctoral fellows.

“We also have been highly collaborative with other laboratories here at Hershey and around the world. So those are some of the things that make it fun. Our lab has a reputation of being a fun place to work. Some research support staff has been with us for 30 years,” Jefferson says.

Organizations such as commercial space flight companies have engaged the lab for answers to questions for them. The lab is currently expecting muscle samples from a space flight to see what happens to muscle in space.

“Astronauts exercise every day and lose muscle. Why is that?” Kimball says.

One graduate student also worked on a project in collaboration with the US Army Research Institute of Environmental Medicine in Natick, Mass. He studied how to maintain the fitness of warfighters in the desert and extreme environments.

“Not only do they have physical strain, but they sometimes don’t eat as much. They lose their appetite. So how do they get the nutrients they need?” Kimball says.

And sometimes, their research cross-pollinates the discoveries of other medical fields.

“A lot of branches have looked at what happens with cancer. Cancer cells are in a growth stimulatory mode, and so understanding what controls cell growth crosses into what we’re doing,” Jefferson says.

As their work continues with the latest renewal of one of their NIH grants, Kimball and Jefferson say they will continue to “work across a continuous spectrum” to ensure their research is “relevant to the whole body.”

It’s also relevant for the scientific community. About 350 scientific publications have resulted from the grants.

“We have shared our knowledge that we have discovered in scientific journals. This facilitates research of others and stimulates drug companies to develop more products,” Jefferson says.

“What I try to impress on younger scientists is that you have to make sure the information you’re getting has relevance to real life.”