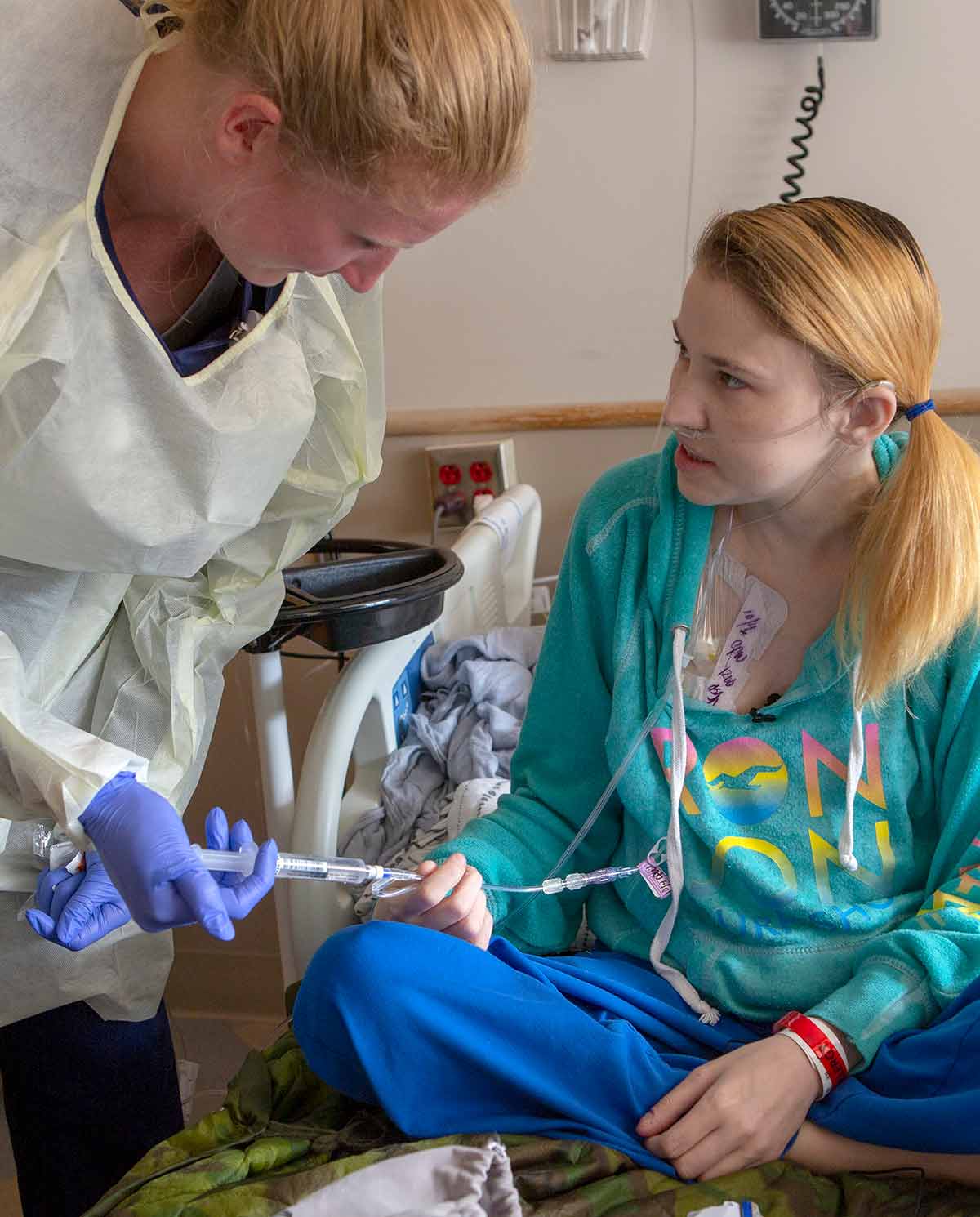 “I’m not giving up. I’m never gonna give up,” said Kibler, 33, who has been battling cystic fibrosis all her life. Amy Koffman, left, a registered nurse, checks Kibler’s medication.

At age 33, Alyssa Kibler has already outlived her life expectancy—twice.

Her optimism comes partly from new medicines, airway clearance techniques and nutritional support that have given CF patients longer life, but largely from an inner strength that seems to come naturally.

“CF always hangs over your head, but I have this attitude that I won’t give up,” said Kibler, who takes up residence at Penn State Health Milton S. Hershey Medical Center four to five times a year for several weeks at a time to get lifesaving IV antibiotics.

The genetic disease causes thick, sticky mucus to build up in the lungs and digestive tract and leads to life-threatening infections. It can also obstruct the pancreas and stop natural enzymes from helping the body break down and absorb food.

“Cystic fibrosis used to be a pediatric disease that rarely allowed kids to live to adulthood. Now it’s an adult disease that happens to start in childhood,” said Dr. Randy Young, director of the Division of Pulmonary and Critical Care Medicine at the Milton S. Hershey Medical Center, which offers an extensive program for evaluation and treatment of a wide variety of pulmonary ailments.

“Our team approach is a hallmark of our care. We bring pulmonologists, respiratory therapists, nurses, pharmacists, social workers and dieticians to the bedside to help our patients achieve their maximum potential,” Young said. “The course of cystic fibrosis is one of waxing and waning. You may feel really good for weeks or months and then experience exacerbations.”

Kibler was diagnosed at age 1 and has been treated at the Medical Center since she was in elementary school.

“Alyssa has a remarkable spirit, and she maintains her sense of humor,” Young said. “She’s an inspiration to anyone who comes in contact with her.”

Craig Dombroski, a respiratory therapist at the Medical Center who has worked with Kibler since she reached adulthood, sees his role as one of support for CF patients like Kibler, who have been dealing with a chronic disease for their entire lives.

“Alyssa has become much more mature in dealing with the emotional side of having CF,” he said. “It’s a bright spot in our day when we can sit and talk with her.”

Her respiratory therapists at the Medical Center assist her with secretion clearance several times a day—including an inflatable vest connected to an air pulse generator that loosens mucus so it can be coughed out and nebulizers filled with medications.

“Our CF patients are in this for life, so respiratory therapy is extremely important for their lungs,” said Respiratory Therapist Renee Miller. “We give them the tools they need, and it’s up to them to use them.”

A person with CF must inherit two defective CF genes—one from each parent—to get the disease, which means a child of two CF carriers has a one in four chance of contracting it.

Kibler, who is adopted, isn’t interested in speculating on why she happened to inherit two bad genes, why she lost her hearing from one of the antibiotics or why she has a rare mycobacterium that makes a lung transplant out the question.

“I was born with the lungs I have, and I’ll use them until they fail me,” she said. “But that’s not going to be today.”

Her disease progression could be measured by the number of activities she used to do that she can’t any longer: Play ice hockey. Ride horses. Hike. Travel abroad. Drive. Stop by a friend’s house. Draw air in and out of her lungs without thinking.

“A lot of days, it feels like there’s someone standing on my chest, and I’ll have stabbing pain,” said Kibler. “It really zaps my energy and frustrates me to no end. 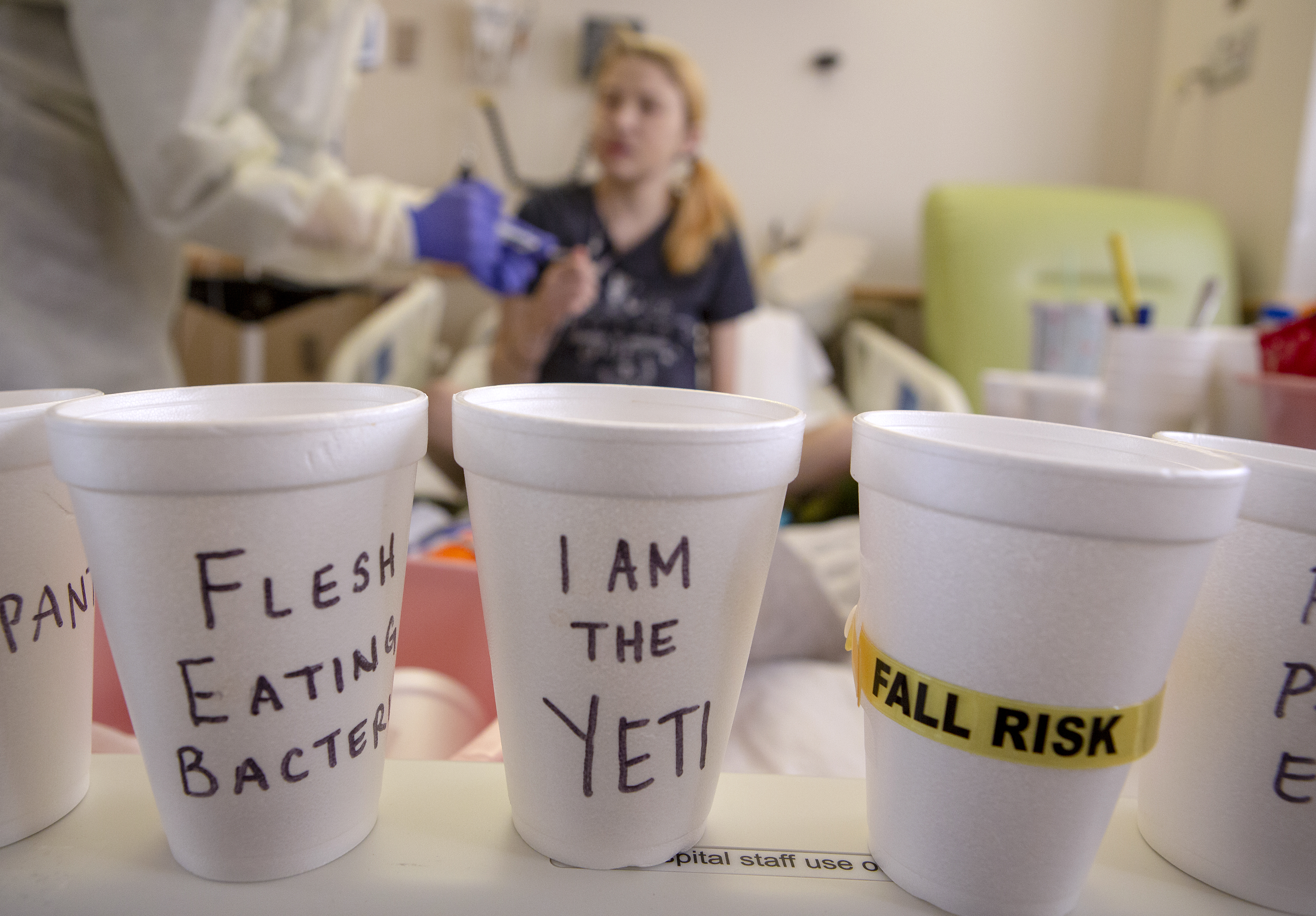 To cope with frustration over her chronic disease, Kibler writes her gripes on Styrofoam cups and shoots them down with a Nerf dart gun.

When in the hospital, she runs a Nerf gun challenge among staff who win points for shooting Styrofoam cups lining any flat surface in her room. The cups are her way of coping, she says. She writes her pet peeves ― including spiders, smoking and, of course, “stupid bum lungs” ― in Sharpie on the cups and then “shoots” them, encouraging others to do the same.

“Alyssa has had to come in to the Medical Center more often during the past few years, but she still tries to find ways to have fun,” said registered nurse Jessie Buffenmeyer. “With the Nerf game, she connects with us on a different level. We’ve become her friends.”

“It’s such an all-encompassing disease, but Alyssa never wallows in self-pity,” said Patti Yanchuk, adult CF program coordinator and registered nurse, who has watched Kibler’s condition deteriorate over the past 15 years. “She has tremendous family support, and that makes a huge difference.”

Her parents have sacrificed much for her and always encouraged her not to let CF hold her back, Kibler said.

She graduated at the top of her class at Harcum College in Bryn Mawr, Pa., and is a certified veterinary technician but will never be well enough to work.

“Some days I don’t even have the strength to get out of bed,” she said. “The thing I miss the most is I can’t be spontaneous. If I want to do something, I have to plan everything to the hour. How many oxygen tanks will I need? Will there be a power source? What will the terrain be like? Will I even feel good enough to go that day?”

Enough of dwelling on that, she says, as she picks up a Nerf gun and hits a cup straight on.

“I truly just take it one day at a time,” she said. “Sure, I feel like I’m dealing with a lot—but I try to do it with dignity.” 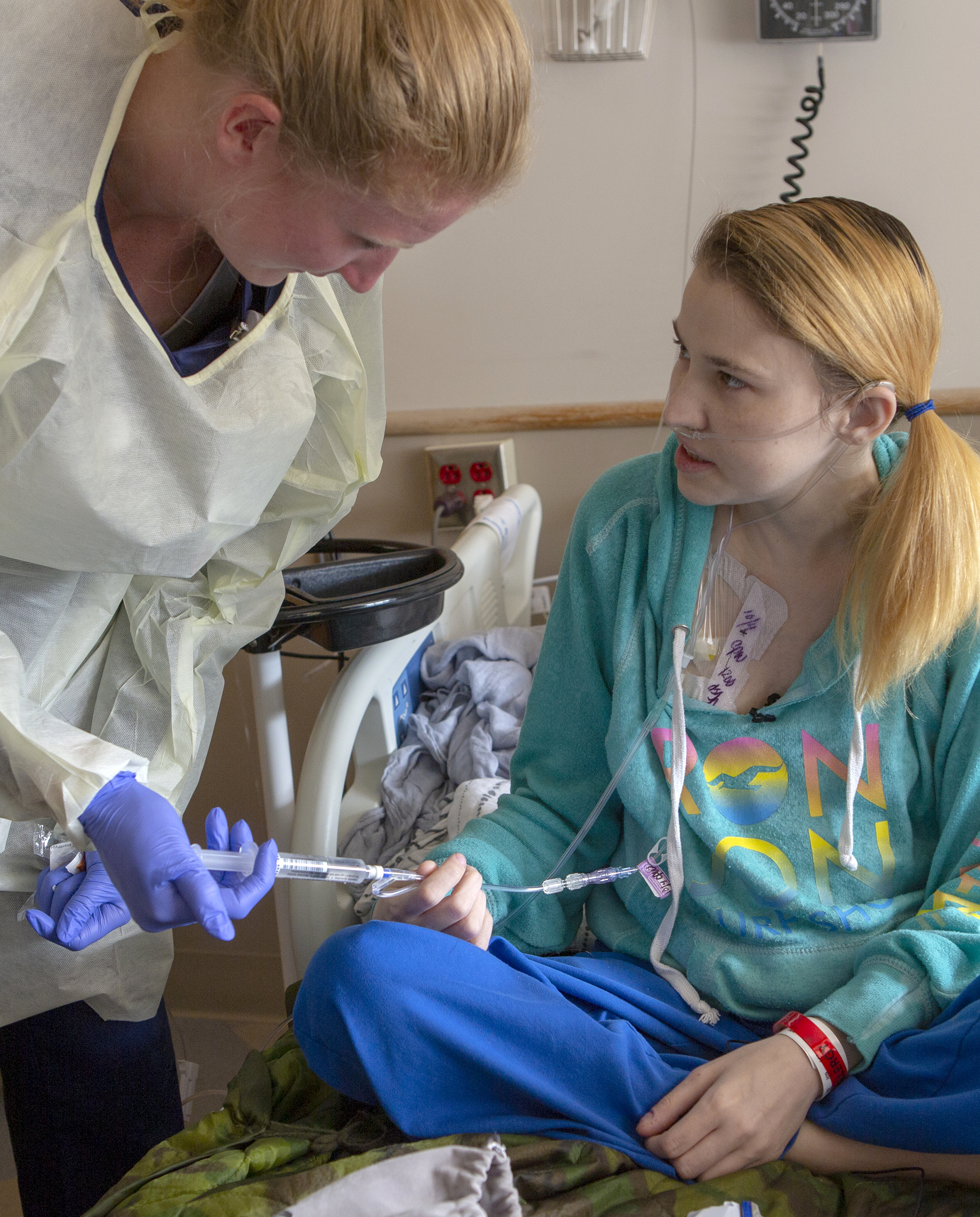 “I’m not giving up. I’m never gonna give up,” said Kibler, 33, who has been battling cystic fibrosis all her life. Amy Koffman, left, a registered nurse, checks Kibler’s medication.