‘Read me a story’ – Bringing books to the youngest patients

With three children ages 2, 5 and 8, Dr. Daniel Schlegel has many-a-time answered a wistful call to “Read me a story, Daddy.” There is “nothing better” than snuggling with a child and a book, as tiny, chubby hands impatiently turn its pages into a world of imagination, he says.

“It does wonderful things for the parent-child bond,” says Schlegel, assistant professor of family and community medicine.

Inspired by a request from Dr. Sukhjeet Kamboj, Schlegel and Dr. Julie Radico, psychologist and assistant professor, were excited to hear about an innovative program out of Boston called Reach Out and Read. Medical providers hand out free books at well-child appointments, which opens the door to discuss the importance of literacy with moms and dads. Reading to a child aids in brain development, social interactions and emotional health, according to the American Academy of Pediatrics.

For the past year, the Department of Family and Community Medicine has implemented its own version of Reach Out and Read with great success. It started with two clinics and has since expanded to six because of high interest, says Corinne Gibilterra, program coordinator.

“Reach Out and Read programming in central Pennsylvania has raised the care that children in our area receive and sets us apart from other healthcare providers,” she says. Radico and Gibilterra continue working to expand the program to all family medicine clinics.

From ages 0 to 5, children go through a vital window of rapid brain development that does not occur at any other time in life. If they hear fewer words, they could start school developmentally behind their peers.

The Reach Out and Read program results in more frequent reading at home, accelerated vocabulary and critical brain stimulation, according to research conducted by the national Reach Out and Read organization. Nationally, the program serves one in four children living in poverty. It has a presence in all 50 states, distributing 1.6 million books per year.

Even if a child is six months old, handling a cloth book still introduces them to the idea of reading, Schlegel says.

“Give them books as early as you can. Even if a baby puts the book in his mouth and the parent corrects it, that’s good. They get a sense of the right thing to do with it,” he says. 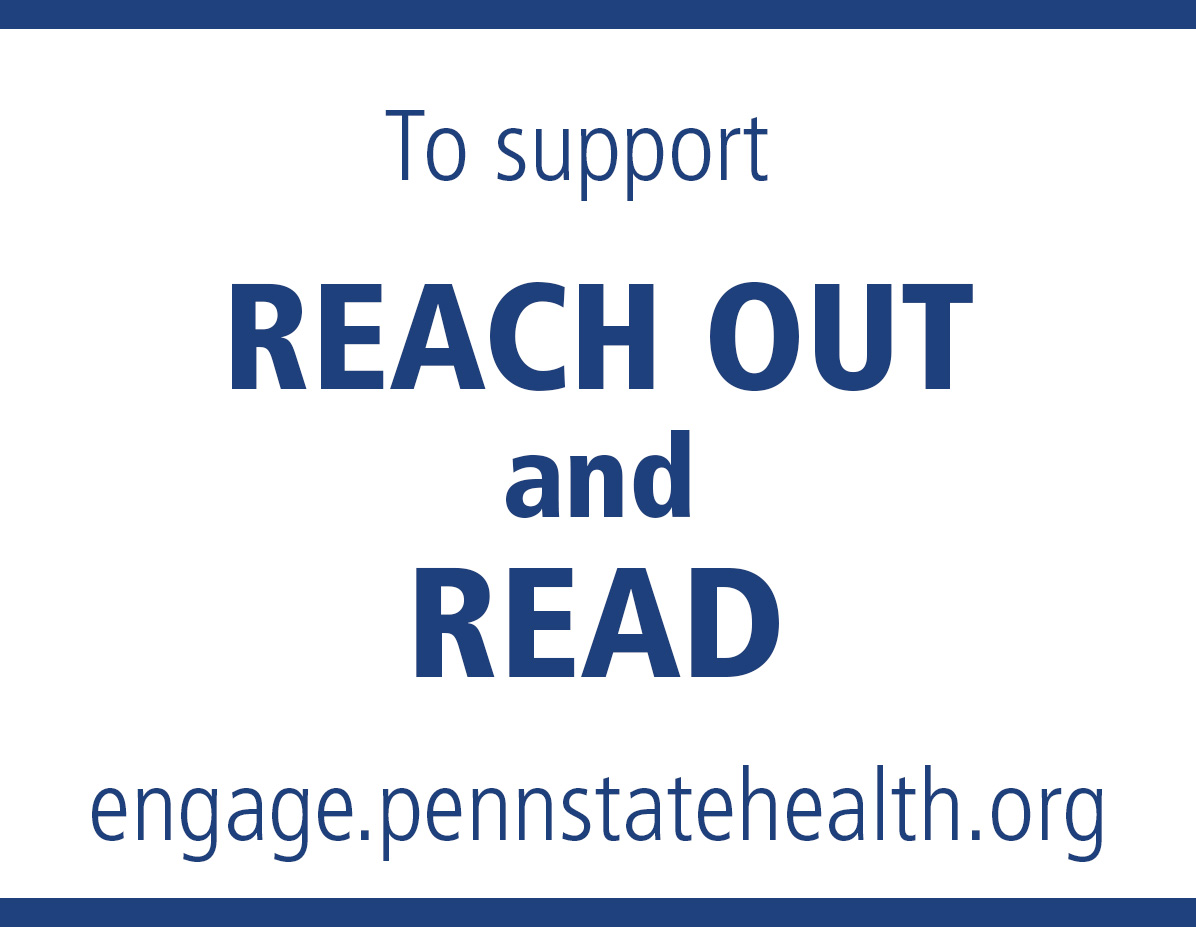 Medical residents have embraced the Reach Out and Read program with gusto, says Radico.

“The residents have taken ownership and get excited when they conduct a well-child visit,” Radico says. “We keep the books on shelves in each clinic and have heard about a lot of positive patient-family reactions to getting the books. Sometimes, when a child who has already received a book comes back for another appointment, they ask for another one.”

It’s important for residents to embrace the program, because someday, they may be practicing medicine in other states, says Schlegel, who is also the Family Medicine Residency Program director. Once they see the importance of childhood literacy as residents, they can create a ripple effect, spreading the word as they graduate and move to other communities nationwide, he says.

“We’re training eight new family doctors each year” Schlegel says. “There could be dozens more in the next few years who will initiate this program at new locations.”

Residents also see the importance of communicating to parents how to best help their children. Parents may be more receptive to reading to children because a medical provider suggested it, Schlegel says.

“When we reinforce to the parent that books are a powerful tool for their child, it means more to them. Without that, they may underestimate the importance of reading to the child,” Schlegel says. “If the doctor says it’s important to mental health and social skills that adds extra weight to importance. They can say to themselves, ‘I can do that for my child and build up a library at home.’”

Meanwhile, donations for more books will mean more clinics will be added to the program, Gibilterra says. Currently, the program tries to keep 70 books at each site, and sometimes, clinics run out of books quickly. On average, 250 books are given out per month. At a cost of $2.75 per Scholastic book, the program needs about $7,000 to keep a half-dozen clinics stocked for 12 months. If the program is expanded for all 15 clinics, the cost will be significantly more, Gibilterra says. So far, the program is offered at clinics in Harrisburg, Mount Joy, Elizabethtown, Middletown, Fishburn Road in Hershey and Nyes Road near Harrisburg.

Because children receive books during well-child visits, some also get more than one book per year so that parents can build up a library at home, Radico says. Book titles include such popular titles as “Good Night, Moon,” and “Stone Soup.” The program also provides bilingual books for non-English-speaking children.

Funding for this program has previously come from Children’s Miracle Network and the Association of Faculty and Friends at Penn State Health Milton S. Hershey Medical Center. Staff and their families have also gotten into the act to help raise funds to purchase books.

When Schlegel’s 8-year-old daughter, Nora, learned that there were kids who couldn’t afford books, she gave $3 last year.

“And this year, she bumped up her donation to $6,” Schlegel laughs.

The program sets Penn State Health apart from other healthcare providers, because families can see that physicians have a personal investment in literacy, Radico says.

“We serve a wide area in central PA and are dedicated to providing this service to children who are statistically less likely to be provided books,” Radico says. “We are emphasizing the patient relationship over time. Family and Community Medicine providers follow patients from cradle to grave. This allows us to show them that investment and carry on the relationship. Now we can say, ‘I provided you a book when you were 6 months old and now you’re 22.’ It’s all about relationship building.”

In addition to the effort established by the Department of Family and Community Medicine, Penn State Children’s Hospital has also launched a Reach Out and Read initiative, which has been supported by partners like the Burgess McCormac Foundation, the Franklin H. and Ruth L. Wells Foundation and the Penn State Bookstore. Ongoing support is vital to sustain and expand participation in the program moving forward. If you are interested in supporting Reach Out and Read,  visit engage.pennstatehealth.org and select “Give Today,” noting Reach Out and Read in the Comments box.