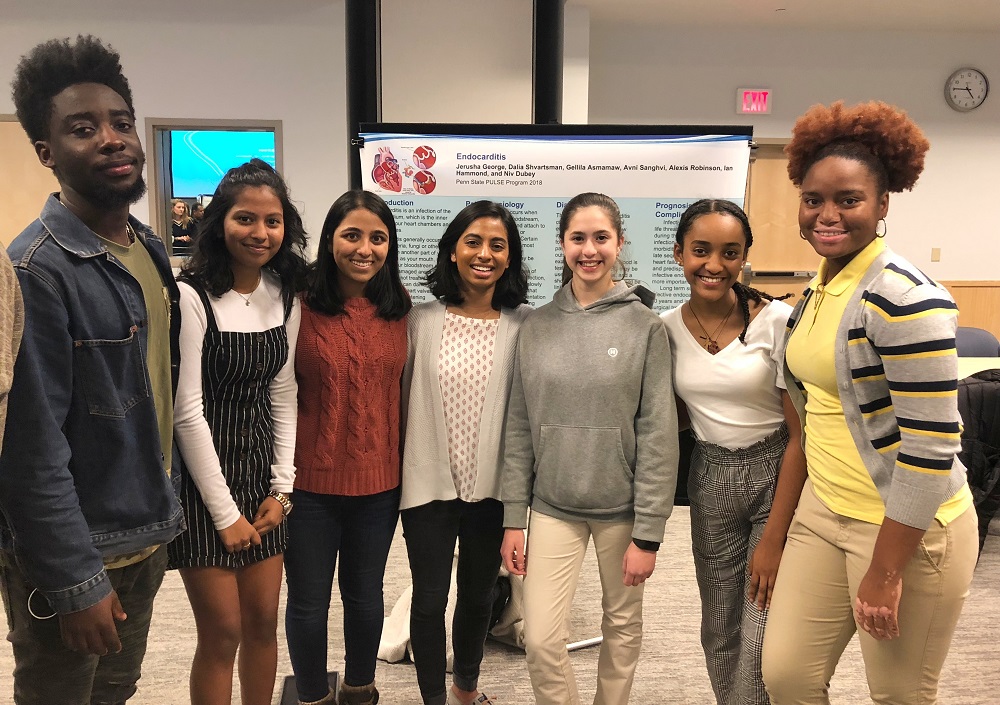 Three high school students sat in the front row of a Penn State College of Medicine lecture hall and listened to Madison Goss.

They actually paid attention. That can be rare in a room full of teenagers, Goss has found — even well-accomplished ones handpicked to be part of college-level program designed to introduce potential doctors and nurses to the field.

“These students were so attentive to my lecture and weren’t playing on their phones or computers like some of their classmates,” she said.

The image stuck with Goss, who wanted these students, in particular, to hear her. Though she was excited about working with all 100 participants, the three girls had been part of a new group. The Office for Diversity, Equity and Inclusion had provided transportation so they could participate in the PULSE program. The office works to increase diversity at Penn State Health and Penn State College of Medicine.

The rides to the Hershey campus are helping the program get back to one of its key goals — helping a greater variety of people learn about medicine.

Goss had fallen in love with teaching just before enrolling at Penn State College of Medicine. And teaching students in the PULSE program was a homecoming of sorts. She had been a student in the 12-week course as a senior at Mechanicsburg Area Senor High School and knew from experience how it changes lives.

Established in 2008, PULSE is the College of Medicine’s educational outreach program for high school students. In 2018, it became one of the programs coordinated through the Office of Diversity, Equity and Inclusion as a diversity pipeline program. Seeking to excite their interest in biomedical sciences, the semester-long course is taught at Penn State Health Milton S. Hershey Medical Center by medical students like Goss and gives teens up-close, hands-on experiences at the research hospital.

“As we are advancing our organization’s commitment to having a more diverse workforce to reflect the increasing diversity of our patient population, our high school and college pipeline programs also need to reflect greater diversity,” said Lynette Chappell-Williams, chief diversity officer and associate dean of diversity and inclusion for Penn State Health and Penn State College of Medicine.

“The PULSE leadership embraced this commitment. In 2018, PULSE expanded the participant representation to more accurately reflect the communities we serve.”

So successful was the program that the Lebanon School District created a model of it for Hispanic students. This program, which includes Hispanic physicians and medical students, begins this month.

Each year, PULSE focuses on one central topic. In 2018, it was cardiology.

That same year, PULSE turned 10, and Goss was co-president.

A cornerstone of the program has always been to increase diversity in the health care profession by reaching as broad a group of high schoolers as possible, but the program had fallen short in achieving this goal, Chappell-Williams said.

In 2008, when the program began, about 12 percent of its students identified as under-represented minority groups (American Indian, African American/Black, Hispanic/Latinx or two or more races).

Students from five area school districts with larger percentages of underrepresented minorities — Harrisburg School District, Central Dauphin, Steelton-Highspire, Lebanon and Middletown — had few, if any, participants. Part of the problem, Goss and others with PULSE discovered, was that students from those schools didn’t have transportation to and from Hershey.

The three students whose focus so impressed Goss were among the first to take advantage of the transportation option. And now, 25 percent of students come from underrepresented minority groups.

Alexis Robinson, a senior at SciTech High in Harrisburg, attended this year’s PULSE program. A year ago, her grandmother died of heart disease, so the cardiology theme spoke to her.

“Being able to tie my passion for science into something close to home made me more intrigued through every session,” she said. “I’ve always wanted to be a doctor, but the program inspired me to make cardiology my specialty.”

After participating in the PULSE program, Goss volunteered to help teach it. A year later, she and co-president Maegan Tupino took over its administration. The two recommitted to making the program more representative of its surrounding communities by partnering with the Office for Diversity, Equity and Inclusion.

“As a Native Hawaiian, I represent a minority background,” Tupino said, “so this was a huge deal to me.”

For a final project, the entire class was separated into small groups to create poster presentations. Medical students judged each presentation.

When the first-place award was given, the winning group jumped up and down and hugged one another.

Three of the winners had ridden to Hershey that day via transportation the PULSE leaders arranged through funding from the diversity office.

And two were female students Goss had noticed in the front row that first day.

“I have been taught the value of diversity and the importance of equal opportunity for years,” Goss said, “but I had never seen the result firsthand like I did when I was watching those students celebrate their first-place prize.” 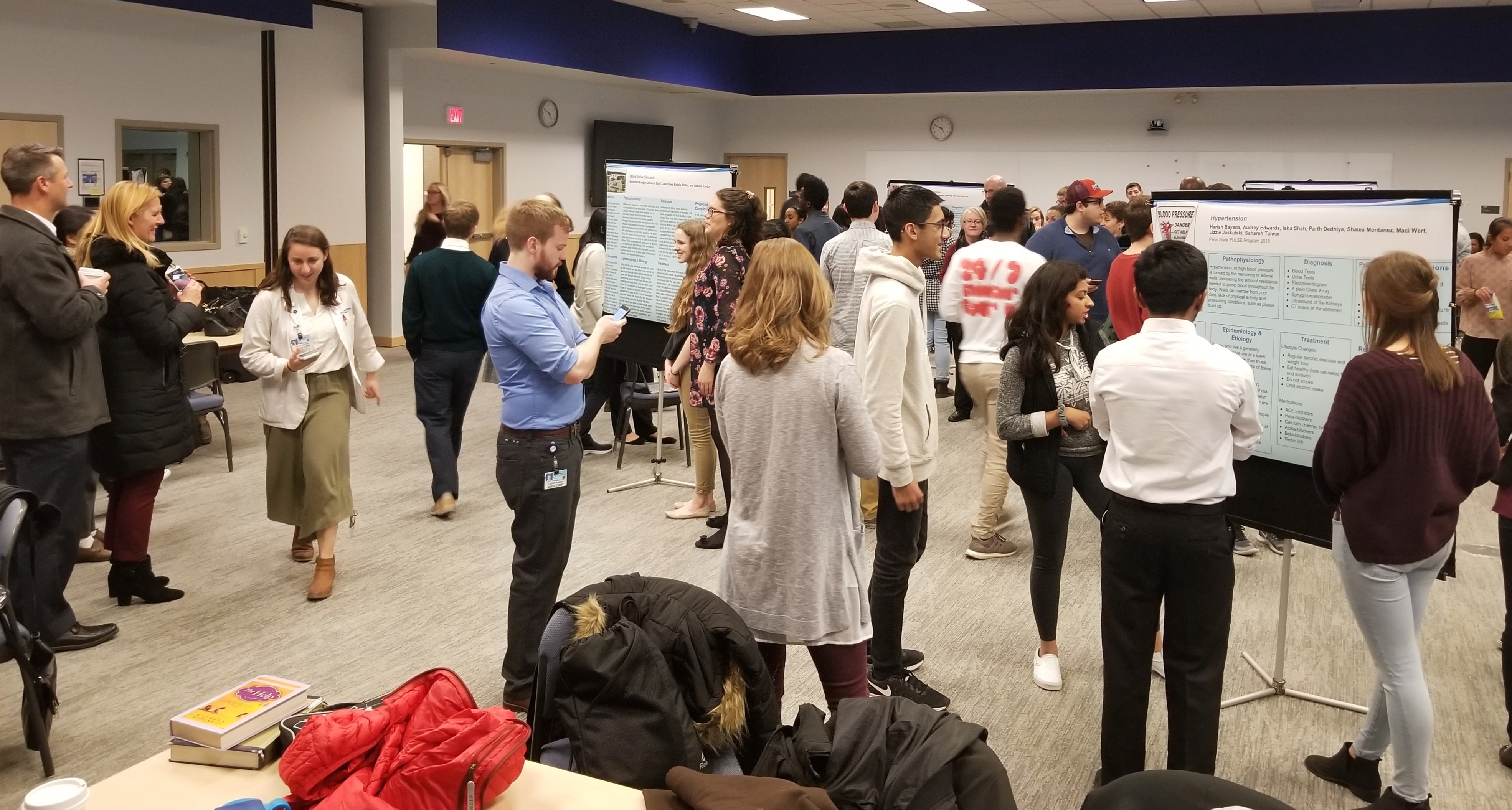