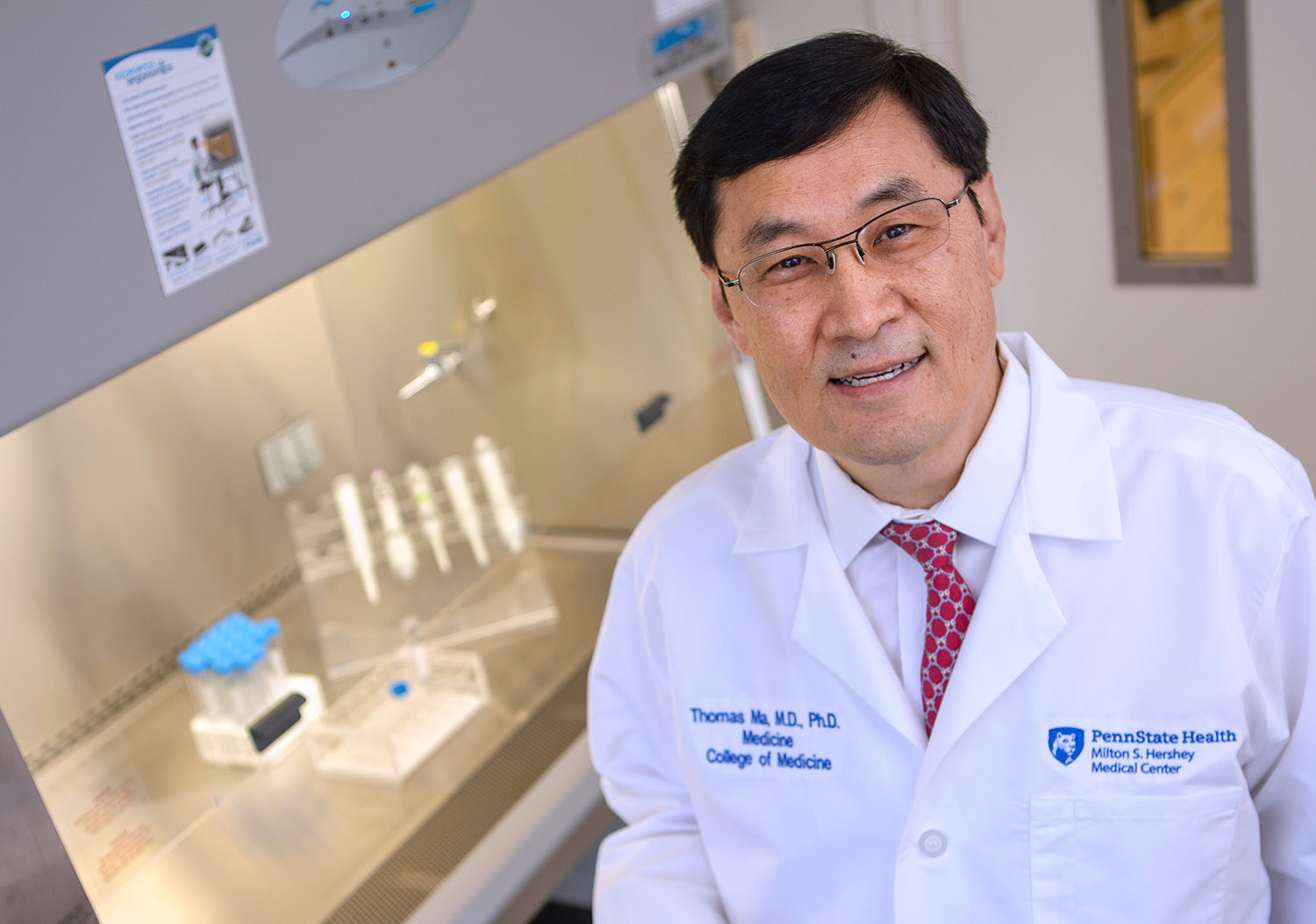 When Dr. Thomas Ma first assumed the role of chair of the Department of Medicine at Penn State College of Medicine and Penn State Health Milton S. Hershey Medical Center, he wasted no time making changes.

Ma left the sunshine of New Mexico for the snow of Pennsylvania in January to assume the post. He previously served as chief of the Division of Gastroenterology and Hepatology at the University of New Mexico – Health Sciences Center (UNM-HSC) and executive director of the UNM-HSC’s Center for Digestive Disorders, Center for Digestive Diseases Research and Center for Inflammatory Bowel Disease. Ma was also director of the New Mexico Veterans Affairs Health Care System’s Center for Cellular and Molecular Biology. He succeeds Dr. Robert Aber, who led the department for 13 years before stepping down as chair in 2017.

“Dr. Ma stood out as the top candidate for this position because of his world-renowned research in gastroenterology and his proven leadership,” said Dr. Raymond Hohl, Penn State Cancer Institute director and co-chair of the search committee for the Department of Medicine chair. “We are very excited to have his expertise in advancing research and progressing the Department of Medicine as a whole.”

Just three months into his new job, Ma launched a major new initiative to transform the process of educating medical students. He noticed physician burnout was an issue and empowered faculty and residents to suggest how to reduce hours and workload and raise the medical school and medical center’s energy level.

“I went all in on this because, as a medical school, our core mission is to train future doctors. It’s our intrinsic value that we do that,” he said.

Ma says the opportunity to have an impact on a bigger stage is what led him to the Milton S. Hershey Medical Center and the College of Medicine.

“I loved the direction the dean is going, which is to improve our research presence, growth and opportunity on the education side and to improve the clinical side,” Ma explained. “I knew I could take it to a higher level here. I saw the potential, and Dr. Hillemeier has a clear vision.”

“I asked the council to think bigger than themselves and have an altruistic view on a higher plane,” Ma said. “They did an amazing job.”

Seeking input from multiple people is a signature of Ma’s leadership style.

“He’s an extraordinarily good listener,” said Dr. Sanjeev Arora, a former colleague of Ma’s at the University of New Mexico Health Sciences Center. “He first tries to understand all different perspectives before making a decision on how to proceed. He gets a great deal of input and consensus before moving forward rather than just leaving people behind.”

So far, Ma’s changes have been positively received. “Dr. Ma has initiated important changes since he joined us in January,” said Dr. A. Craig Hillemeier, dean of Penn State College of Medicine, chief executive officer of Penn State Health, and Penn State’s senior vice president for health affairs. “He brings new ideas for leading the Department of Medicine as its faculty and staff care for patients, educate and train tomorrow’s providers, and stimulate discoveries that can advance health.”

Ma has several other goals he wants to implement, including a top national ranking for Penn State College of Medicine. He aims to make it one of the top-funded institutions by the National Institutes of Health (NIH)–doubling the department’s NIH R01 grant funding, which is awarded to individual faculty based on competitive grant submissions–in the next three to five years.

In a major step toward that goal, he convinced his entire lab team from the University of New Mexico Health Sciences Center to move to Hershey, Pa., to conduct research on defective intestinal barriers, a field in which Ma is internationally recognized. He regularly serves as chair of NIH and Veterans Affairs study sections, evaluating the scientific merits of research grant applications throughout the United States.

Among Ma’s other goals is to have the highest work satisfaction ranking among medical school faculty in the country, develop professional growth and build a stronger research program.

“Our residents deserve the best. We have an obligation to provide a great experience.”

Dr. Robert Strickland, another former colleague at the University of New Mexico Health Sciences Center, said Ma’s extensive studies of the intestinal mucosal barrier function have gained major importance as researchers unravel the interactions between the microbiome and host responses, including immune and metabolic elements.

“His research in this area may ultimately be the key to understanding diseases such as ulcerative colitis, sepsis and cancer,” said Strickland.

Ma is excited about how these changes will impact the department’s future.

“That’s why I took the chair position – to impact the department in a positive way.

“In a bigger sense, that’s what I’m here to do. It’s a great department, but I want to take it to levels it has not yet reached.”