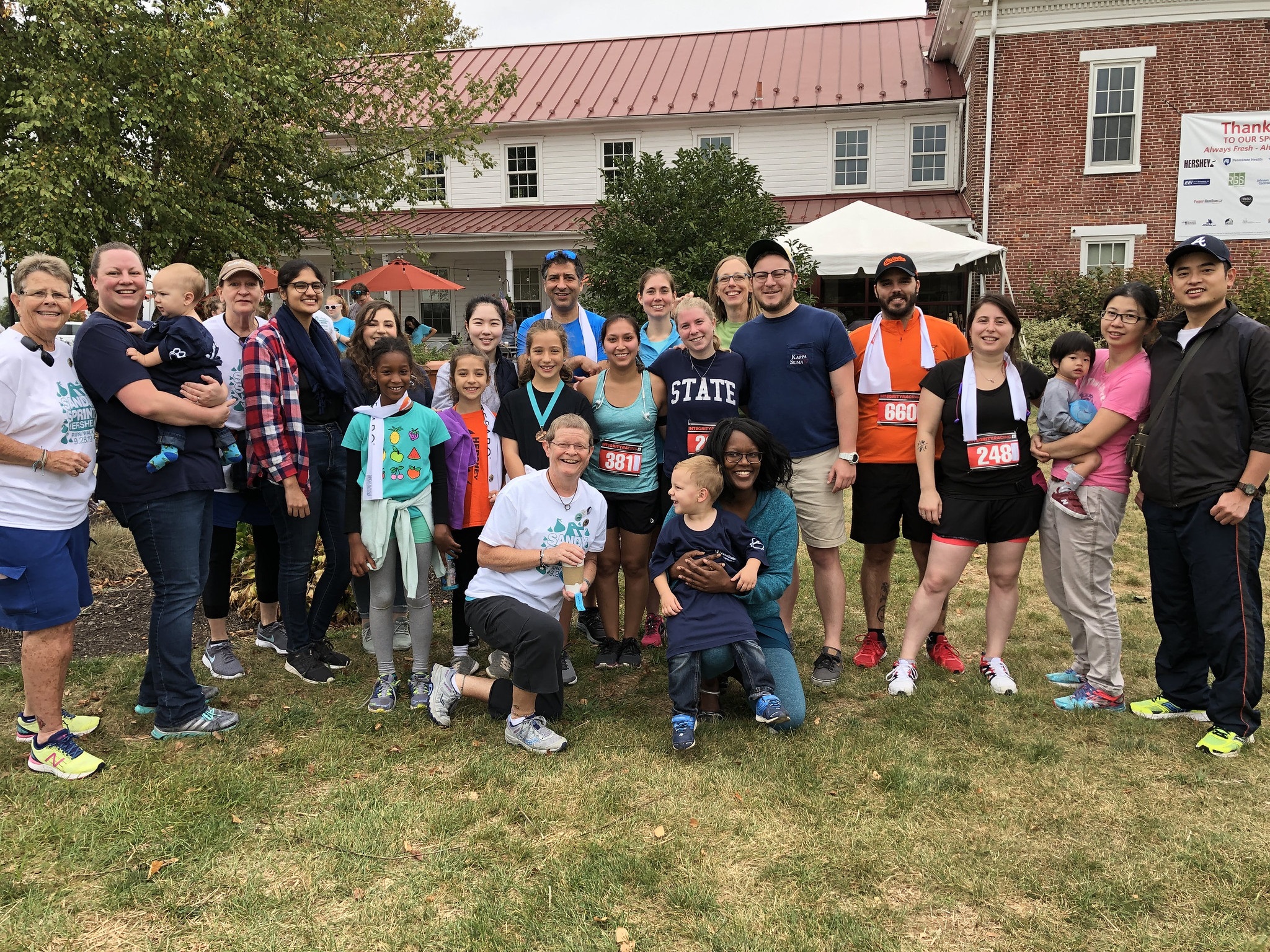 In early 2016, Michelle Kirscht knew she didn’t feel right, and smartly, she didn’t try to talk herself out of looking into it.

“I had this full, bloated feeling, and I just didn’t feel like myself,” said the Elizabethtown woman who had recently lost her job at a local bank and had decided to take some time off before looking for a new one.

Turns out her time off would be used to fight our nation’s most deadly gynecological cancer – ovarian cancer, which strikes about 22,400 women annually in the U.S. Currently, 50% of women diagnosed with ovarian cancer die from the disease within five years.

“I had a mass on my right ovary, but I was blessed to be diagnosed at an early stage, which I learned isn’t very often the case with ovarian cancer,” said Kirscht, who underwent a hysterectomy followed by intraperitoneal chemotherapy at Penn State Cancer Institute.

In September, she participated in the Sandy Sprint, run by the Philadelphia-based Sandy Rollman Ovarian Cancer Foundation, which is dedicated to funding cutting-edge research. She realized once again how fortunate she was in her early diagnosis and treatment.

Click this image or the arrows for the gallery of photos >> 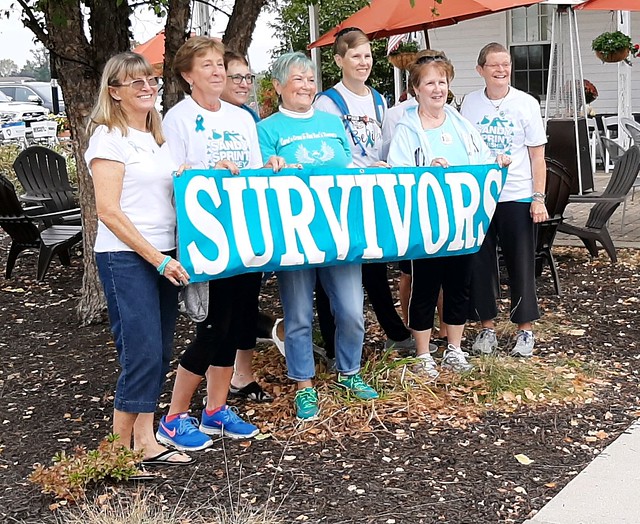 “I was one of the few women there who had only been treated once,” she said. “Often women face recurrences.”

She was heartened to see all the women there who were still alive, double-digit years later, many of whom were treated at Penn State Health Milton S. Hershey Medical Center.

“We offer a holistic, cutting-edge approach to the treatment of ovarian cancer, including the most innovative technologies for minimally invasive surgeries with maximum removal of the tumor, and an integrated approach for first-line therapy,” said Dr. Rebecca Phaeton, Kirscht’s surgeon and a gynecological oncologist.

Intraperitoneal chemotherapy—administered directly into the abdomen via a port—offers the best survival advantage, she said.

Kirscht considers herself twice blessed – 14 years ago, she was diagnosed with early-stage breast cancer and was treated successfully at the Milton S. Hershey Medical Center. She still gets regular breast checkups at the Medical Center yearly and goes every six months to keep tabs on what’s going on in her abdomen.

“I still get butterflies every time I go. Once you’ve had cancer, that feeling never goes away,’’ she said.

Kirscht’s outcome is, happily, much better than Sandy Rollman, the woman for whom the sprint is named. She, like many women with ovarian cancer, didn’t get the help she needed for this cancer, often called a “silent killer” because the symptoms are often vague, ignored or misdiagnosed.

“Sandy was only 32 when she was diagnosed, and her symptoms were attributed to a lot of other things because of her age,” said Robin Cohen, CEO of the Sandy Rollman Ovarian Cancer Foundation, who was Rollman’s oncology nurse. “That was 19 years ago. Today, women are living longer, and there are better treatments on the horizon.”

This year marked Hershey’s inaugural Sandy Sprint, an annual Philadelphia event that draws 4,000 participants. Organizers chose Hershey as “a natural way to expand our reach across the state,” Cohen said.

Some 30 staff from Penn State College of Medicine and Hershey Medical Center formed a team that participated and raised nearly $1,400. Overall the Hershey sprint raised more than $25,000, Cohen said.

The foundation funds more than $4.4 million in research grants, one of which was awarded to Katherine Aird, assistant professor in the Penn State College of Medicine’s Department of Cellular and Molecular Physiology.

The elusive nature of the disease makes research so important, said Aird, who believes ovarian cancer doesn’t get the same attention or research funding as other cancers. Aird, Phaeton and Nadine Hempel, associate professor of pharmacology, started the Penn State Gynecological Malignancies Group, a team of research scientists and physicians, to work toward better understanding of ovarian cancer.

The research grant from the Rollman Foundation will be used to look at how cells use nutrients – glucose, for instance – on a cellular level that makes them more or less responsive to currently-used ovarian cancer therapies, Aird said.

“Getting the grant from the foundation was such a boost,” she said. “I am just so impressed with the foundation and how it started. When I heard about the Sandy Sprint, there was no way I wasn’t going to go. In fact, my whole lab participated.”

Phaeton said she participated in the Sandy Sprint as a show of advocacy and support for her patients. 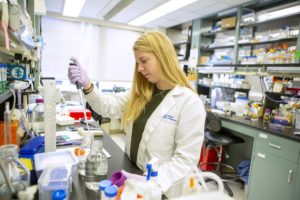 Erika Dahl, who studies biomedical science at Penn State College of Medicine, prepares solution in the lab of Katherine Aird, assistant professor in the Department of Cellular and Molecular Physiology.

The fight against ovarian cancer requires a loop of support and collaboration between patients, providers and researchers, she said. Kirscht is a wonderful example of that – she gave her specimen for research at the Cancer Institute.

“I’m excited about the basic science collaboration between physicians and the labs here, where they are looking at actual patient lab results and biopsies,” Phaeton said. “Our translational research program is building investigative, integrated and promising treatment solutions.”

To women who might notice the vague early signs of ovarian cancer – bloating, feeling full quickly and pelvic pain – she advises, “Pay attention” and don’t automatically think it must be a gastrointestinal issue such as inflammatory bowel disease. It’s also very important to be aware of family history of breast and/or ovarian cancer.

“Think of your ovaries,” Phaeton advised. “Many ovarian cancers are missed by doctors in other specialty areas who aren’t thinking of ovaries either.”

Although guidelines suggest Pap smears every three to five years to check for cervical cancer, women should still have an annual pelvic exam where ovaries can be felt, she said.

Using a smartphone to improve health