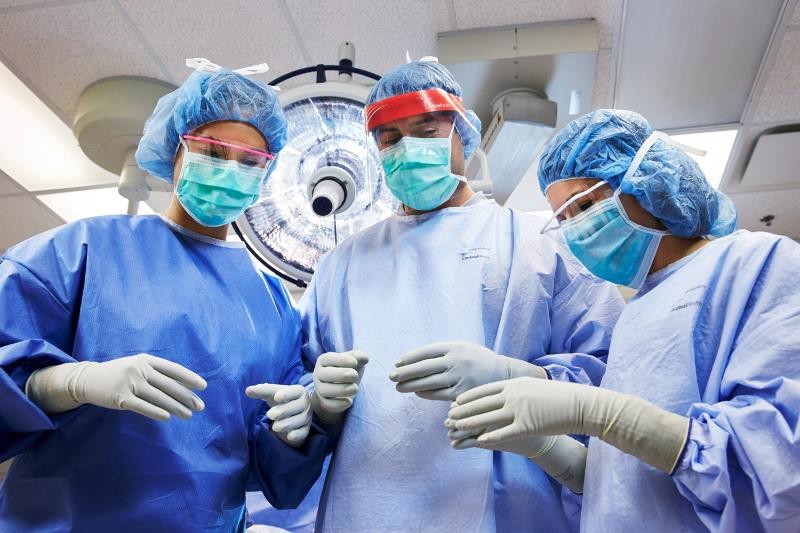 Natural rubber latex, a derivative harvested from rubber trees in Malaysia, is a common component in medical supplies. Repeated human exposure to proteins within the latex may trigger mild to severe allergic reactions that can include skin rashes, itching, hives, nasal congestion, breathing difficulty or respiratory arrest. Health care workers and certain patient groups are at increased risk due to repeated latex exposure.

“In terms of patient and staff safety, this latex-free initiative is well worth the effort,” said Rocourt, physician-advocate for the project.

Since the changeover, Rocourt reports surgical residents have noted a decrease in hand rashes and itching. “They didn’t realize that those reactions were, in fact, latex allergies. Over time and with repeated exposure, these reactions would only get worse.”

The project’s second phase, which began in March, is the systemwide conversion of nearly 200 urinary products, including Foley and standard catheters.  The final phase will be to identify and replace specialized items within departments for latex-free alternatives. The goal for project completion is December 2018.

Penn State Health St. Joseph has also joined the latex-free initiative, Law confirmed. “The overall bottom-line benefit for going latex-free is patient and staff safety. This ties into Penn State’s mission of quality, safety and service. It is simply the right thing to do.”