All in the family: Miller counts Hershey Medical Center as one of his own 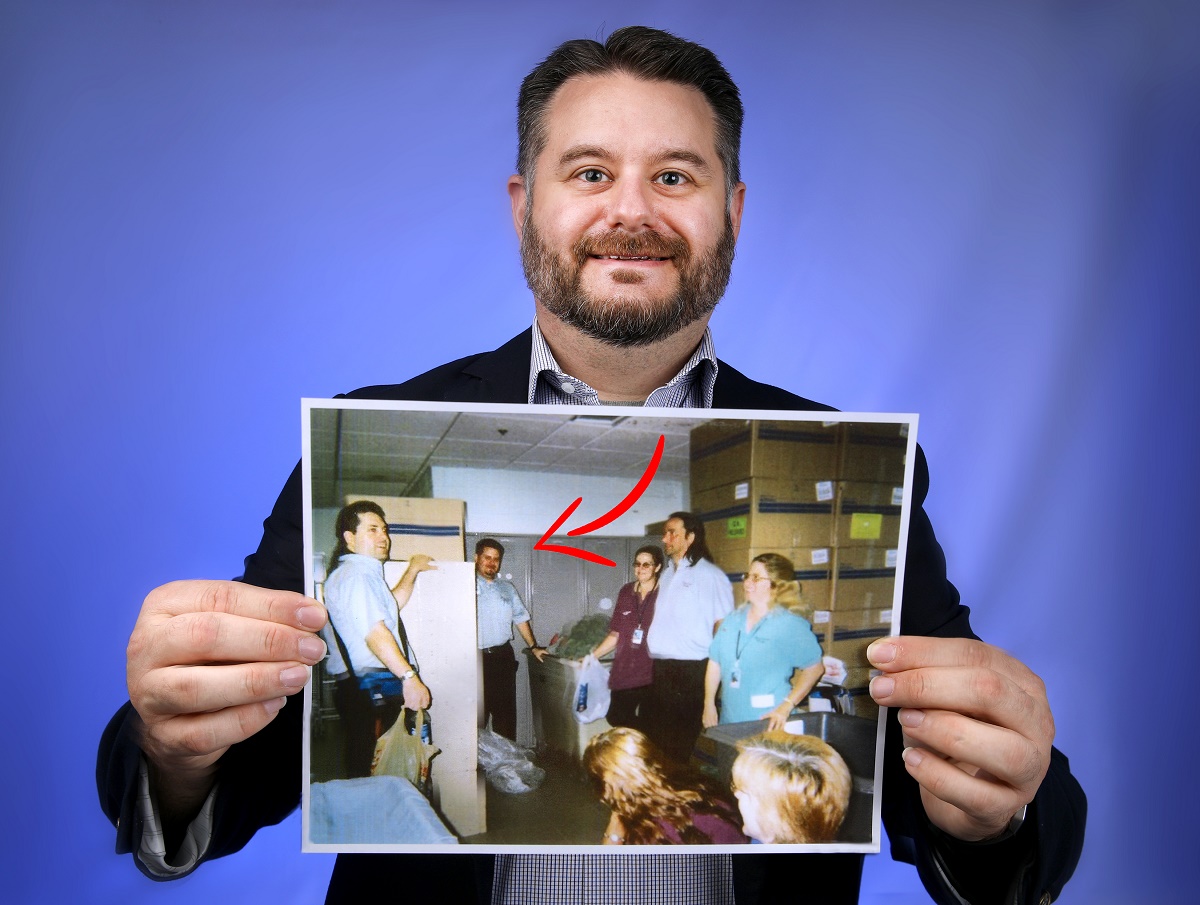 Kristofer Miller shares a photo of himself during his early days of working as a housekeeper at Hershey Medical Center in 2004. An arrow has been added to show him among his co-workers.

Hershey Medical Center is celebrating its 50th anniversary this month. This is the last in a series of four profiles on employees who share what makes the medical center special to them.

Perhaps it’s to be expected since Miller’s life has been entwined with the Milton S. Hershey Medical Center since he took his first breath – literally.

“In October 1970, my mother started working here as a floor secretary, and in 1980, I was born right here on the third floor,” said the Environmental Health Services (EHS) quality coordinator and hiring manager. “When my day care or school were closed, Mom would bring me to work with her. The Medical Center was always there when I was growing up, like a family member.”

Several of his extended family members have also worked at the Medical Center, and all four of his children were born there, in the same room where he was born – a fact that he punctuates with an exclamation point-quality to his voice.

“I can’t think of any part of my life without the hospital in it,” Miller said.

As a teenager in the early 1990s, he volunteered in various departments, including General Surgery and Shipping and Receiving, doing clerical work and delivering newspapers to waiting rooms. “That’s how I learned my way around the hospital,” he said.

Because one big perk of Mom’s job was a tuition discount to Penn State for dependent children, Miller said it was always a given that he would go to college there. As it turned out, he didn’t find himself nearly as enamored of the university as he is of the Medical Center – which is why he dropped out.

Back home in Hershey, Miller turned to the familiar family member he knew he could count on – the Medical Center.

Miller applied for a job and got hired as an entry-level housekeeper in March 2004, cleaning the Same-Day Surgery Unit each night for two years. He spent his time buffing floors, shampooing rugs, cleaning windows and waiting for the chance to advance. He became a group leader and was promoted to supervisory roles, becoming EHS quality coordinator in 2017 and hiring manager in 2018.

In the timeline of his life, his professional milestones at the Medical Center are interspersed with personal milestones ― getting married in 2012, his mother’s retirement in 2013 after 43 years of service, the birth of his first child in 2014, his second child in 2015 and his twins in 2017.

“Our youngest twin spent a week in the NICU and received top-notch care,” Miller said. “The staff really helped my wife feel better about our situation.” A week later, Miller got a taste of that exceptional attention himself, when a blood clot in his leg landed him in inpatient care. He and his wife continue to count on the Medical Center for expert care and support, especially for their oldest son who has cerebral palsy.

Although he counts dropping out of college as one of his biggest regrets, Miller said the Medical Center has given him many opportunities for advancement and growth.

In 2018, he participated in Penn State Health’s inaugural year of the Leadership Essentials Development Program. At the January 2019 graduation from the program, Miller was one of five employees recognized with the Excellence Award for 2018.

“We’re not just a teaching hospital for medical students and nurses, we’re a teaching atmosphere for professionals,” he said. “This institution definitely invests in its people, especially when you show an interest in learning.”

From bats to TMI, veteran nurse educator has seen it all