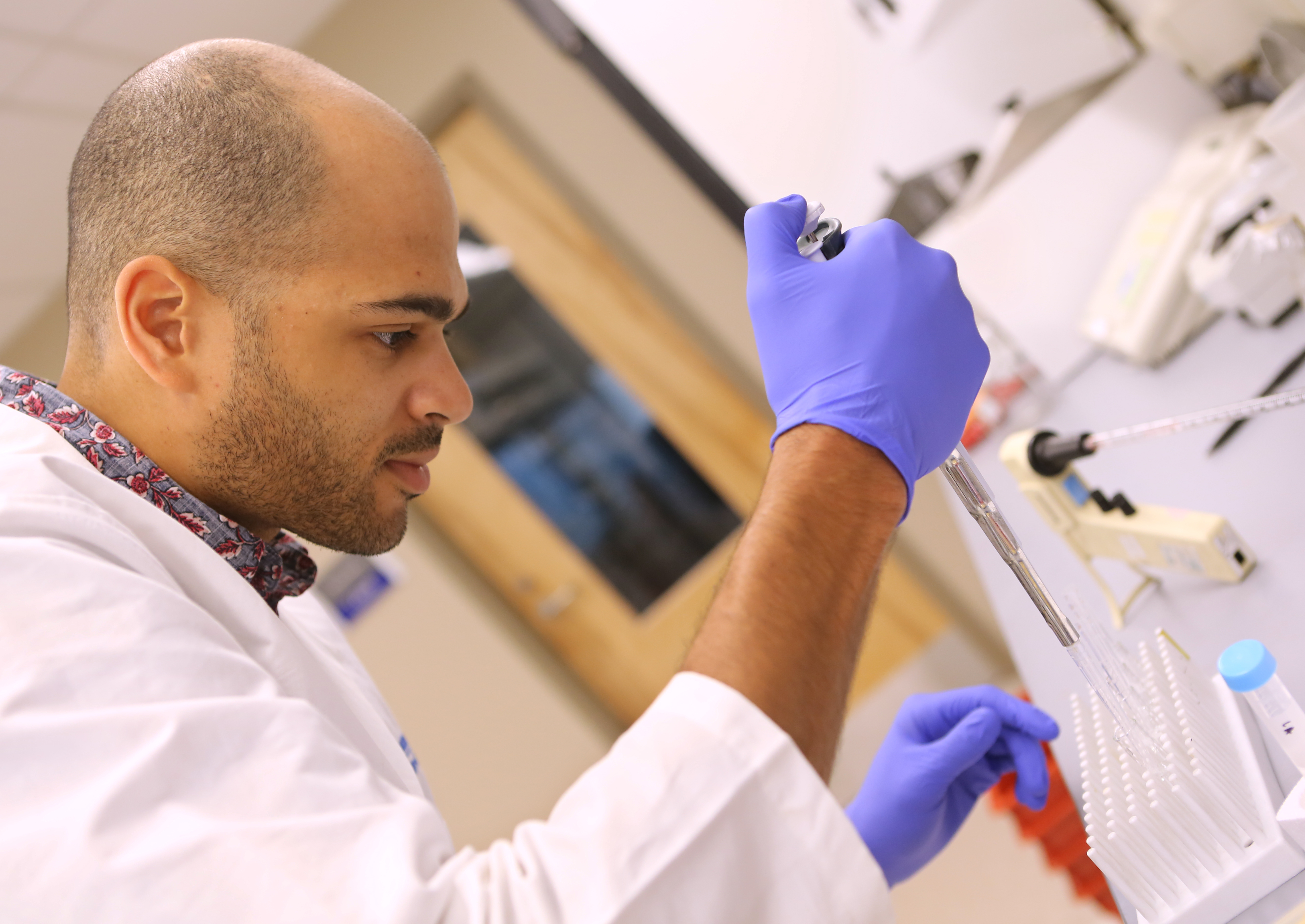 Robert Nwokonko performs research on calcium signaling in cells, which can help improve understanding of autoimmune diseases and diseases that compromise the immune system.

When he started his studies at Penn State College of Medicine, Robert Nwokonko never imagined his research would land him in the company of 43 Nobel laureates.

The fourth-year biomedical science graduate student from Downingtown, Pa., will travel to Lindau, Germany, for the 68th Lindau Nobel Laureate Meeting from June 24-29. He will join 600 students, doctoral candidates and post-doctoral scholars under the age of 35 competitively selected for the rare chance to hear from some of the world’s most lauded scientists and researchers.

This year’s meeting is dedicated to physiology and medicine and will set two records—the most Nobel laureates ever assembled at a medicine meeting and the most diverse set of participants who represent 84 countries of origin, according to meeting organizers.

“To be among most of the living Nobel laureates and hear them talk about the future of research and their sciences—that’s an opportunity of a lifetime,” said Nwokonko, the first College of Medicine student to attend the event. “I was really excited and surprised when I found out I was chosen.”

More than 130 academic academies, universities and foundations worldwide nominated candidates for participation. Nwokonko was first selected as the representative from the College of Medicine and then chosen by the Graduate School of Penn State to represent the University in the selection competition for the Lindau meeting.

“I have rarely had the pleasure of evaluating such a diverse and high-quality group, which made the selection difficult,” said Stefan H.E. Kaufmann, professor of microbiology and immunology at the Charité in Berlin and director of the Max Planck Institute of Infection Biology.

Nwokonko looks forward to hearing from 2017 Nobel Laureates Michael Rosbash and Michael Young, who were honored for their research on circadian rhythm. He is most excited to meet Nobel Laureate Martin Chalfie, who discovered parts of the cellular pathway that he is currently studying.

Nwokonko works in a lab under the direction of Donald Gill, professor and chair of the Department of Cellular and Molecular Physiology at the College of Medicine, studying calcium signaling in cells. These signals are critical for the proper functioning of many cell types such as immune cells, muscles and neurons.

The lab focuses on one organelle in particular—the endoplasmic reticulum—whose functions include acting as the major storehouse for intracellular calcium, which plays an integral role as a form of communication cell use to turn on different genes to initiate the expression and synthesis of proteins.

“My thesis research is focused on learning how cells develop calcium hotspots, which are found very close to the outer cell membrane, the barrier that encapsulates the interior of the cell. These are important for selectively fine-tuning the calcium-based communications network within cells,” Nwokonko explained.

The cell’s ability to recognize complex signals coming from the outside, rapidly process them and carry out some function to address them is critical, he said.

Nwokonko is one of the primary authors of a research paper—his first—that was recently published in the “Proceedings of the National Academy of Sciences of the United States of America.” His research builds on work from a previous College of Medicine graduate student and a post-doctoral researcher in the lab.

“This paper includes some powerful new information about how calcium signals are generated in the cells,” Gill said. “Robert has been a crucial part of the work that determines how the proteins that mediate calcium signals come together in tight clusters in the cell. Together with Dr. Yandong Zhou, an assistant professor in my lab, he showed how these clusters produce crucial calcium oscillations that control the regulation of genes in many different cell types.”

The research has important implications for understanding the pathophysiology of cells in disease and under stress, Gill said. The research will be important in developing drugs to treat autoimmune diseases and diseases that compromise the immune system. 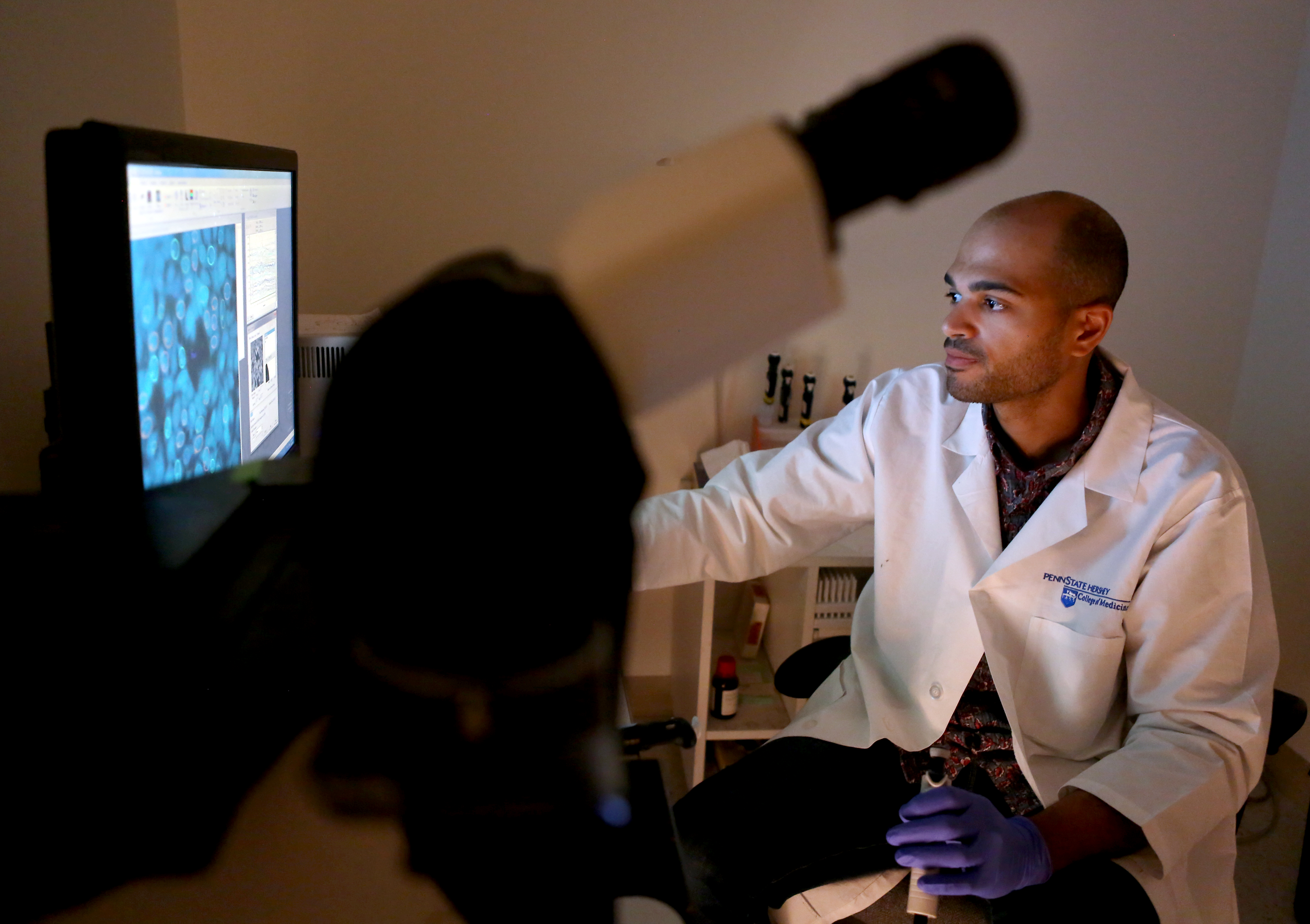 Robert Nwokonko is one of 600 students in the world to be chosen to attend the 68th Lindau Nobel Laureate Meeting in Germany this June.

The son of an emergency room physician, Nwokonko said his father was always giving him slides to look at under the microscope and chemistry workbooks, and his childhood summer camps were always science-related.

“I hated those chemistry workbooks at the time, but I guess they helped me after all,” said Nwokonko, whose goal is to be the director of his own lab one day, much like his mentor, Gill.

“Robert is one of the brightest, most successful graduate students I’ve had in my lab,” Gill said. “His attendance at this meeting will allow him to learn from the greatest leaders in the field about discoveries in biomedical sciences that have turned into major breakthroughs in treating disease.”