For This Advocate, Sweet Victory

Weighing 380 pounds, Bellefonte resident Dean DeVore was pre-diabetic and struggling with lethargy and sleep apnea. The AccuWeather meteorologist and game announcer for the Penn State Nittany Lions realized he had to do something to gain control over his health. He turned to surgical weight loss and lost 160 pounds.

Pennsylvania residents who, like DeVore, are struggling with obesity have a new option, thanks to the efforts of Dr. Ann Rogers, director of the Penn State Surgical Weight Loss program. After more than a decade of advocacy and more trips to Capitol Hill and the State Capitol than she cares to count, she is celebrating a victory.

As of Jan. 1, Pennsylvania state employees who have a BMI of 40 or more and diabetes are able to get weight loss surgeries covered by their health insurance. The benefit is thanks in large part to Rogers’s tireless efforts.

“It’s an amazing victory for patients,” Rogers said. “We were one of just a handful of states in the country where state employees did not have a benefit to get bariatric surgery or any sort of treatments for obesity whatsoever. To have this be turned around at the state level is incredibly important.” 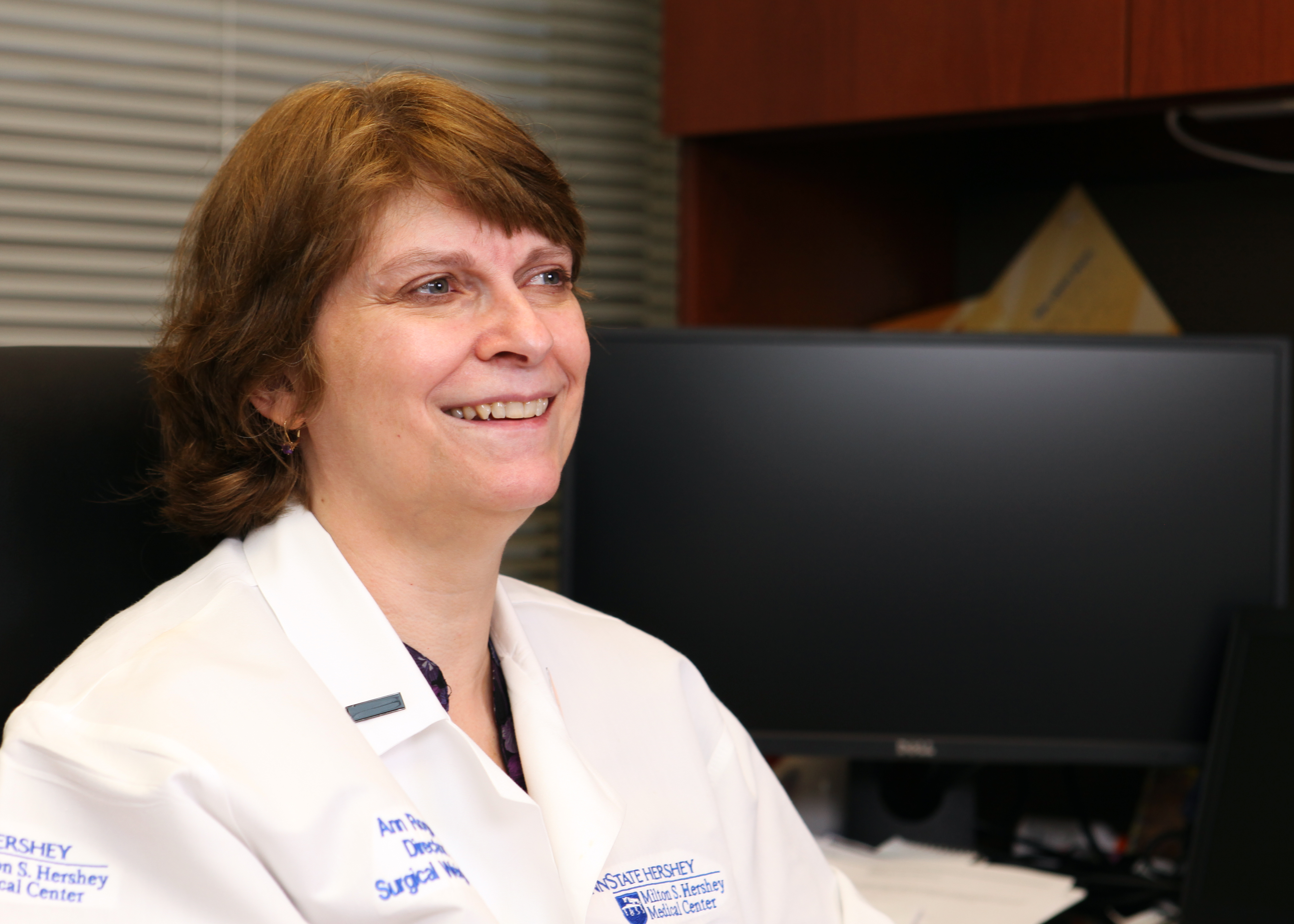 The stipulations on weight and diabetes mean that only a small subset of employees and their families – probably only about a quarter of those who need it – are eligible, Rogers said, but it’s a start.

The surgery helps improve or resolve more than 40 obesity-related conditions, such as obstructive sleep apnea, high blood pressure, high cholesterol, and joint problems. This reduces health care costs for patients by 29 percent within five years after bariatric surgery, according to the American Society for Metabolic and Bariatric Surgery. Rogers hopes that the commonwealth will soon see the value of extending coverage to a broader group of people who could reap its health benefits, she said.

Still, considering the Centers for Disease Control predicts that one-third of U.S. adults could have diabetes by 2050, coverage for a treatment that can put the disease into remission is exciting. Currently, 30 million Americans have diabetes, which is the main cause of new-onset blindness and can lead to kidney failure, limb amputation and increased risk for stroke.

Dr. Ann Rogers discusses why obesity rates have increased by at least 30 percent during the past 15 years in “The Medical Minute.”

“It’s amazing how quickly diabetes can be turned around after bariatric surgery; some patients never need their medications again. That doesn’t happen for everyone, but the vast majority will find that their diabetes is easier to control on less medication,” Rogers said.

Rogers has long been involved on the state and national level in advocating for improved access to care for treatment of obesity. She is Pennsylvania’s Access to Care representative for the American Society for Metabolic and Bariatric Surgery and serves on several national advocacy committees of surgical societies.

Over the years, Rogers has met with state and national legislators, the Physician General of Pennsylvania and Gov. Tom Wolfe. Each year, she makes presentations to the Pennsylvania Employees Benefit Trust Fund about the safety, effectiveness and health benefits of weight loss surgery.

Many employers’ insurance plans do cover surgical weight loss procedures for anyone with a BMI of 40 or a BMI of 35 and any of a long list of related medical conditions that can be improved with the surgery, Rogers said.

Without coverage, patients are looking at a price tag of approximately $30,000 for weight loss surgery, a figure that is out of reach for most people. 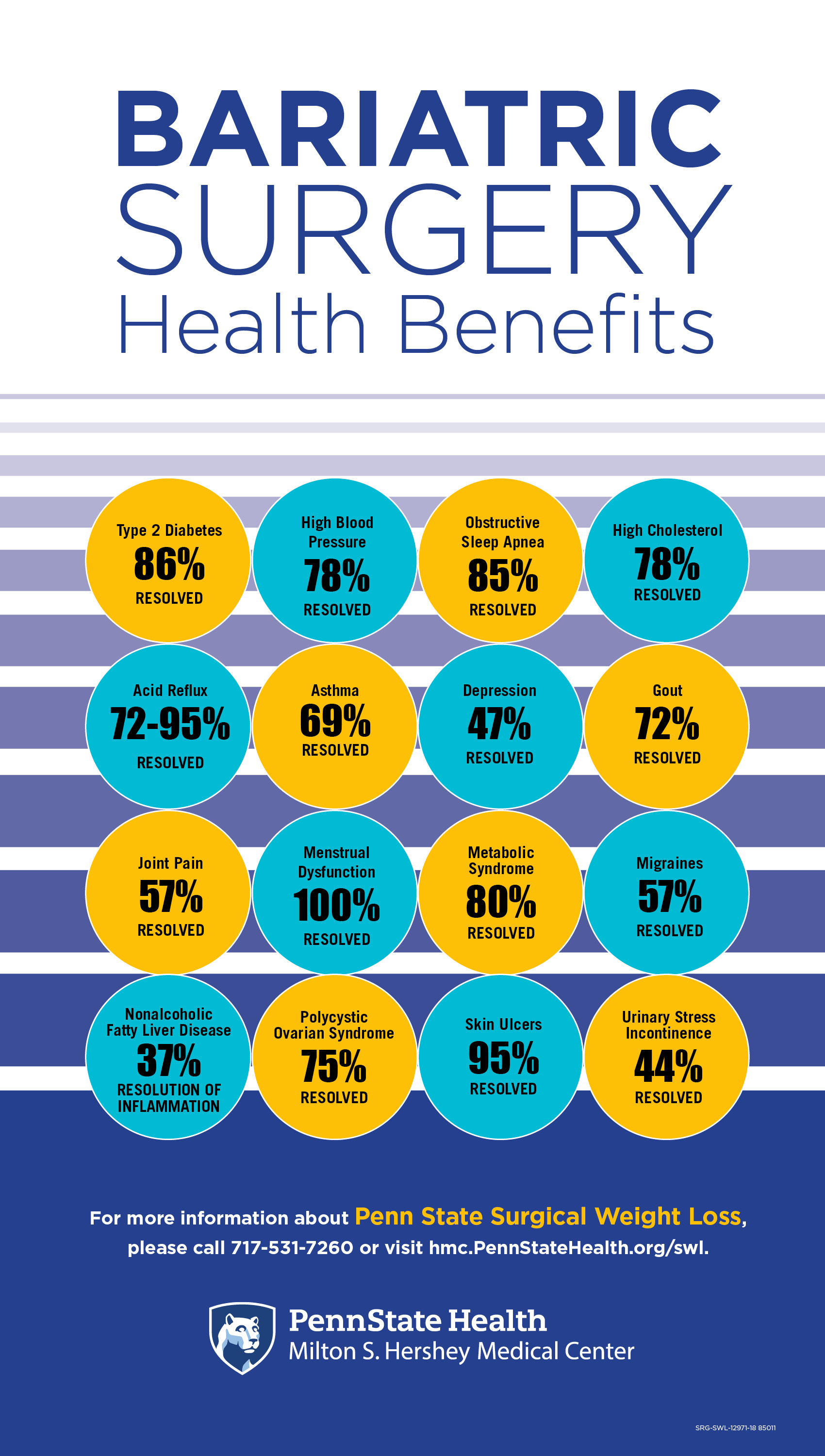 Aside from improved health, the economic benefits from resolving coexisting conditions are proven, she said. “Weight loss surgery is one of the few medical treatments that has been shown to pay for itself within two years, with fewer doctor visits and medications,” she said. “Nobody ever asks, ‘If we operate on your lung cancer, when will it pay for itself?’ That’s a loaded question, and it implies a certain amount of stigma toward obesity.”

It raises Rogers’ ire every time she sees that stigma. She’s even been pointedly asked, “Do you know of any other medical problem where patients bring it on themselves, and insurance still pays for it?”

Her reply: “Yes, thank you, I do. Heart disease related to things you eat, lung cancer caused by smoking, head injuries caused by riding on a motorcycle without your helmet. No one is there with the emergency medical technicians asking you whether you brought it on yourself when you have an accident. That never, ever comes up in any other field except in terms of obesity.”

In fact, Rogers said, no one chooses to be obese; it’s a disease rooted in many underlying factors, including genetics, biology, hormones, age and even lack of education about healthy food choices. Many patients are ashamed or afraid and don’t seek treatment because of that, she said.

“A huge number of our patients have been heavy since they were 5, so they’ve spent their whole life being teased about their weight, being tormented, being told it’s their fault,” she said. “So by the time patients actually get up the courage to seek out weight loss surgery, they’ve probably tried every single diet and weight loss program that exists in the world, so they already feel like a failure.”

Watch Dr. Ann Rogers share insights on obesity and surgical weight loss on “Ask Us Anything About…”

A deep desire to help transform the lives of those who have all but lost hope drives Rogers’ passion and advocacy.

“I love seeing someone around the hospital who greets me…and I don’t recognize them, and they were my patient three years ago. They’re just a whole different person, and I love seeing that transformation!” she said.

Rogers wants people to know that the decision to have surgery isn’t rash or dangerous. In fact, weight loss surgery is safer than gallbladder or hernia surgery. However, she stresses, the procedure isn’t a magic wand waved to make a person thin; it’s a tool that patients can use to help them control how they eat so they can lose weight.

DeVore knows that firsthand. “It was like pushing a reset button,” the 51-year-old said of the vertical sleeve gastrectomy Rogers performed that helped him reach his current weight of 225. “My body needed a kickstart to get back to the health I used to have.”

His appetite is smaller now, but he still struggles with temptation. DeVore works out three times a week and monitors what he eats. He also recognizes the emotional triggers that send him looking for comfort food—and then he makes the conscious decision to eat three celery sticks instead of three candy bars.

Still, there’s no comparison to his pre-surgery struggles, he said. And that makes him want to be more than just the voice of Beaver Stadium—he wants to be a voice cheering for others to take advantage of the kind of care he received from the Penn State Surgical Weight Loss program.

“It’s the best program in the area, and Dr. Rogers is always trying to make the process better,” he said. “I’ll sing their praises for the rest of my life.”

Rogers began her career as a general surgeon in New York City and made the decision to do a fellowship in minimally invasive bariatric surgery at Hershey in 2006. In 2007, she became director of the program, which is designated a Center of Excellence by the American Society for Bariatric Surgery and named a Blue Distinction Center for Bariatric Surgery.

Her patients love her, a fact that’s reflected in her consistently high patient satisfaction scores.

To that, Rogers just chuckles and says, “You don’t go into clinic thinking, ‘Today I’m going to get great patient satisfaction scores.’ I go into clinic thinking, ‘Today somebody is going to walk in that door and put their life in my hands.’ That is an unbelievable privilege, and I absolutely honor that commitment. I love what I do, and I think my patients can tell I love what I do.”