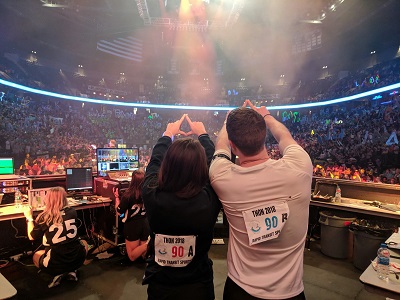 Emma Dahmus, left, and Clay Cooper look out from the stage during the My Hero Zero concert post-pep rally.

Clay Cooper has been stretching twice a day, every day for the past several weeks. The fifth-year MD/MBA student began running on the treadmill again and got as much sleep as he could.

It’s all part of the preparation for dancing in his first THON.

“I started doing P90X yoga, which is an hour and a half,” added Emma Dahmus, another MD/MBA student and first-year THON dancer. “I also bought compression socks.”

The 46-hour dance marathon was a test of endurance and determination as more than 700 Penn State students took to the dance floor Feb. 16-18 at the Bryce Jordan Center in University Park. They helped raise more than $10.1 million for the fight against childhood cancer. THON is the largest student-run philanthropy in the world. Since 1973, THON has raised approximately $150 million for children’s cancer care and research at Penn State Children’s Hospital.

According to THON officials, the money raised this year can support:

The proceeds from THON ensure that nearly 600 Children’s Hospital patients who have been diagnosed with cancer can receive the most advanced care at no cost to their families.  THON funds also fuel the work of the Four Diamonds Pediatric Cancer Research Center – whose faculty scientists and clinical researchers are members of Penn State Cancer Institute – to better understand, treat and cure pediatric cancers.

Cooper and Dahmus are not only classmates in the MD/MBA program, they are lifelong friends with a personal connection to Four Diamonds, THON’s sole beneficiary. In 2007, both were on the student council that started Mini-THON at Lower Dauphin High School in Hummelstown. Since 1993, Mini-THON events throughout the commonwealth have raised $23 million for Four Diamonds.

“Emma and I were neighbors when we were little and knew a child in our neighborhood who had cancer and whose family was supported by Four Diamonds,” recalls Cooper. “Unfortunately, the child didn’t survive.”

They’ve known others throughout the years who have battled cancer, both successfully and not, and work with Four Diamonds patients as students in Penn State College of Medicine’s MD program.

Despite all they have done over the years for THON, they was still one thing missing: they wanted to dance at the event. They make up two of the four dancers from the Penn State Smeal College of Business.

For Cooper, it was an appropriate bookend to his Penn State experience. For Dahmus, it’s something she’s always wanted to do ever since she watched her sister dance for THON when she was a Penn State student.

“It’s an honor to have grown up in the area and know people who have been Four Diamonds families and finally be part of such a large charity for the hospital,” said Dahmus.

In addition to the training, they spent the months leading up to THON doing their own mini-fundraisers such as the THON 5k and bowling nights. Dahmus even “rented out” her dog for a day.

As the weeks got closer, the two could barely contain their excitement. “It’s such an inspiring event. I’m just blown away by the energy,” said Cooper.

“It’s nothing like I’ve ever seen,” added Dahmus. “Everybody is just so excited!” 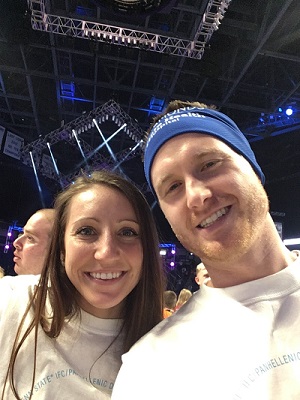 Emma Dahmus and Clay Cooper are all smiles during the final hour of THON.

That high carried them through the weekend. As exhausted as they were once THON ended Sunday night, they were just as excited as when it began 46 hours earlier.

“It was incredible,” said Cooper just 45 minutes after the event ended. “It’s the most exhausted I’ve ever been, but it was worth the physical pain. For us, we can take part in this and dance, and tomorrow things go back to normal, but the kids we’re doing this for don’t have that.”

Neither knew what to expect going into THON but say it was an incredibly rewarding experience.

It passed by faster than they thought it would, although Sunday was a test of determination as minutes began to feel like hours, and both were grateful for the training they had done, especially the stretching.

Bands, pep rallies and games from the crowd entertainment committee kept Cooper, Dahmus and all the THON participants going over the weekend.

For Dahmus, the Four Diamonds family presentation was the most inspirational part of the event. “It reminded us why we were doing this – For the Kids.”