Moving discoveries to market: How investments in commercialization support can lead to better health

Just as musicians get pleasure from playing in a symphony, researchers at Penn State Hershey enjoy working in an environment of regular discoveries, developments and technological advances.

But just as music doesn’t reach its full potential without an audience to hear it, the discoveries of Penn State Hershey’s faculty, students and staff benefit few if the ideas developed on campus don’t reach the marketplace.

As federal funding for research has decreased in recent years, the College of Medicine has increased its commercialization efforts through the Office of Technology Development to ensure that its most promising work reaches those it is intended to benefit. Penn State Hershey Dean and CEO Dr. Harold L. Paz, stated that innovation in biotechnology provides the regional economy with ideas, investment and jobs that can drive economic growth and vitality.

In 2011, the College of Medicine named Keith Marmer director of an office that previously managed some contracts with licensing mostly handled by staff in State College.

“There really wasn’t the hands-on support we can now offer,” Marmer said.

Now, he leads a team that evaluates campus research and protects the intellectual property developed there. His office works to commercialize what is known as translational medicine – looking for ways to take drugs, discoveries and techniques from the lab or clinic to market.

Commercialization not only brings new treatments and cures to patients, but it can also be a key part of attracting additional industry-sponsored research. Royalties from licensing agreements create another stream of revenue that is increasingly important to support the academic and clinical research missions.

A big part of Marmer’s job is education — teaching researchers how to protect their intellectual property through patents and other means, secure license agreements and work with off-campus partners.

“We have fabulous faculty here – the best and brightest,” he said. “But they weren’t necessarily familiar with commercialization. It takes a different mindset to collaborate with industry. We don’t necessarily want faculty to become entrepreneurs, but to think entrepreneurially. We have to teach everybody a new language and how to engage successfully with industry.” 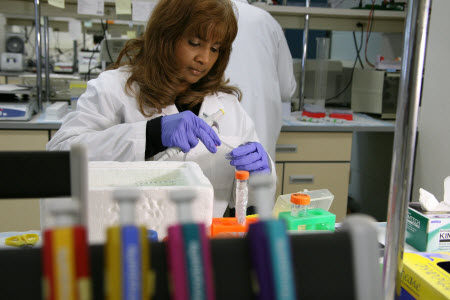 Unlike a software program that may go on sale just months after being written, commercialization in the life sciences takes longer because it is a heavily regulated industry. It may take a dozen years for a new drug to get to market, but there are steps drug developers can take early on to increase the likelihood of a successful progression through the process.

Joyce Tombran-Tink, principal investigator in the laboratory for retinal diseases, says it was because of the Technology Development’s support that she got a patent for a drug she developed that reduces diabetic retinopathy, a disease of the eye that causes blindness. Tombran-Tink was recently awarded a QED proof-of-concept grant for $200,000 from the University City Science Center in Philadelphia; a first for the College of Medicine.

“The QED program has given me money to develop (the drug) and make better compounds that are more stable and effective than the original,” she said. “The Office of Technology Development works with me as if they were researchers too, but they know what to say when they go out and talk to people to see who is interested in licensing the technology.”

Researchers spend a lot of time finding funding for their work. While federal funding is declining, investors are always on the lookout for projects with the potential for good financial return. Much of the work of the Office of Technology Development is focused on bringing researchers and investors together.

“Those relationships are critical,” Marmer said. “Those interactions, if managed successfully, can help to bring our innovations to market.”

Two years ago, the Office of Technology Development started its Innovation Café series, which brings together stakeholders from academia, government, industry and the investment community several times a year. By fostering connections and providing an opportunity for networking, new ideas or start-up companies may be fostered. To date, the series has reached more than 500 people.

An annual Innovation Awards program recognizes faculty and staff for obtaining patents, licensing their discoveries and starting companies. It celebrates a student researcher and young faculty member to watch, then names someone Innovator of the Year. “It’s all about recognizing what we hold to be important,” Marmer said.

John Wawrzyniak, a physical therapist and athletic trainer at Penn State Hershey, worked with three physicians to invent a digital health app that uses an iPad to record patients doing therapy exercises correctly so they can see how to repeat them at home.

The work was self-funded until he went through Technology Development’s TechCelerator program, co-sponsored by Ben Franklin Technology Partners and brought to Hershey with the support of a Keystone Innovation Network grant from the Harrisburg Regional Chamber and the Pennsylvania Department of Community and Economic Development. Wawrzyniak received one of two $4,000 awards to refine his idea, and now he is applying for a $100,000 QED grant that would help him take the app to market.

“If we decide to move forward and it gets licensed for commercialization, the royalties would be part of another revenue stream for the university,” he said. 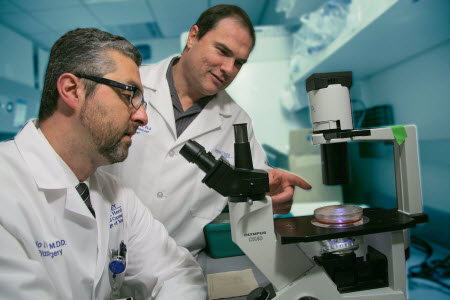 In his two-and-a-half years on the job, Marmer and his office have helped nearly a dozen companies get off the ground. The office also doubled the number of licenses completed compared to the two years prior.

“We get to be part of bringing someone’s idea along a path to where it can benefit a patient somewhere down the line,” he said.

Joseph Sassani, professor of ophthalmology and pathology and winner of this year’s Innovator of the Year Award, has taken advantage of many Technology Development programs to help commercialize a simulator that will give surgeons experience performing eye surgery.

By taking part in Technology Development’s TechCelerator Boot Camp, he was able to learn the steps necessary to develop his invention for commercial interests. He has also taken advantage of the Entrepreneur-in-Residence Program that pairs veteran entrepreneurs with researchers for mentorship and assistance in launching companies.

“They seek out and develop these programs and relationships,” Sassani said of the office. “They refer us to attorneys who can help with the very important but tedious legal aspects of intellectual property, help us address investors and assist with registering of a new company. There are a lot of things that need to be translated with an invention so they can be accessed by potential users.”

Marmer said as the region’s only academic health center and one of the largest employers in central Pennsylvania, it’s important and appropriate for Penn State Hershey to focus on finding ways to bring industry partners, investors and entrepreneurs together with its scientists and researchers.

“I’m proud of the fact that our team has been able to bring all these pieces together.”