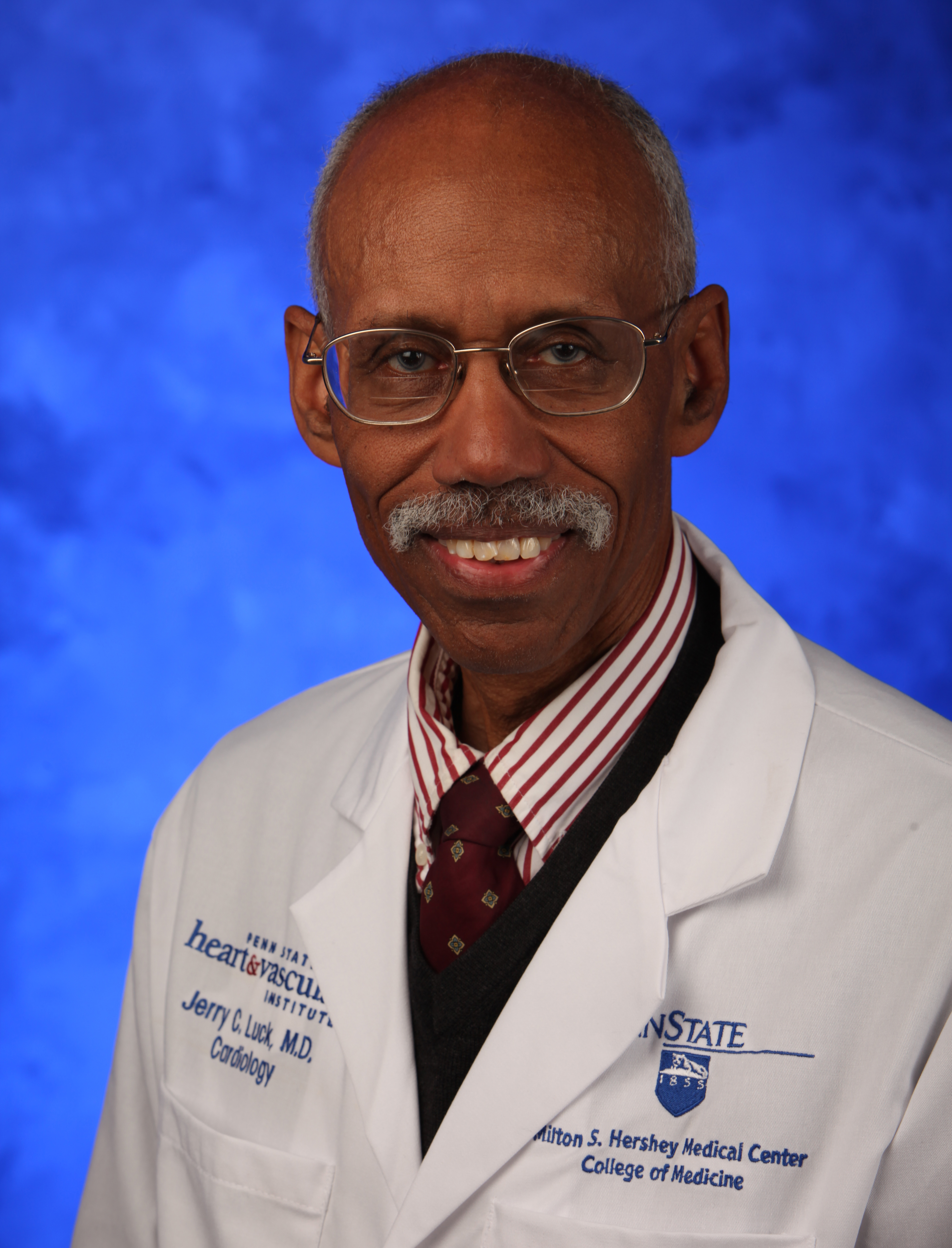 While Dr. Jerry Luck was known for being an excellent clinician, it’s the influence he had on the people around him that is being most remembered.

Luck, a professor of medicine and cardiologist, passed away on Monday, May 18 at the age of 68 after a bike accident in North Carolina.

“Jerry Luck was a great clinician and an even better person,” said Dr. Larry Sinoway, director, Penn State Hershey Heart and Vascular Institute. “So many over the past week have said, in one way or another, that they wished they could be more like him. This, to me, is evidence of his impact and greatness.  It is so very sad when we lose someone so good and so vital.”

Luck joined Penn State Hershey in 1985 as director of cardiac electrophysiology. While he left in 2006 to private practice, he still taught here, and returned as a clinician last year.

Dr. Gerald Naccarelli, chief, Division of Cardiology, knew Luck since 1981, when both were in Texas – Luck as an assistant professor of medicine at Baylor College of Medicine and Naccarelli at his first job at University of Texas Medical School.

“He was an instant favorite of the students, residents and fellows because of his ability to teach them at the highest level,” Naccarelli, who worked closely with Luck as heart rhythm specialists, said.  “Jerry was one of the most caring physicians I have ever known. His patients and staff held in him in the highest regard.  He was my father’s cardiologist before my dad died of cancer. All of us here at Hershey will miss him. “

Colleague Dr. Urs Leuenberger was one of the more than 100 cardiology fellows Luck trained while at Hershey.

“From the first time I met him in 1986 I could not help but be deeply impressed by this gentle, kind, unpretentious, funny and wise man,” Leuenberger said. “I was saddened when he left Hershey to go into private practice a number of years ago but was overjoyed when he recently decided to come back.”

Leuenberger recalled that even when extremely busy, Luck never let himself be rushed, always took time to listen to the patients and students, did a thorough exam that contrasted what is now customary, and took time to explain to patients in simple language what he thought and to address their concerns and questions. Luck had a skill for putting patients at ease.

“Of course, the result of his method was that he had what we call ‘great clinical judgment,’” Leuenberger said. “That is to say, he knew when to use fancy medical things and treatments and, alternatively, when less was more. “

“When you went to him with an electrophysiological problem, he often told you, and then convinced you that ‘this is a classic,’ no matter how unusual you thought it was,” he said. “His sense of humor was dry yet the timing and facial expression that accompanied it was hilarious, and he let you know that he didn’t take himself too seriously. When you saw him in action, it was clear that he thoroughly enjoyed what he did.”

Bob Kipphorn, RN, clinical cardiac transplant coordinator, as a then critical care nurse intern, experienced Luck’s guidance firsthand in 2004. Kipphorn was caring for an elderly woman in the SICU who developed new onset atrial fibrillation and was showing signs of clinical compromise.  Luck appeared and Kipphorn introduced himself and started explaining the patient’s clinical course.

“He thanked me and said, ‘I’ll tell you what Bob, I think our lady needs to be cardioverted.’ I responded, ‘Ok, Dr. Luck, but I think I better go get my preceptor,’” Kipphorn recalled. “Dr. Luck said, “No, no, no, we don’t have time for that. Now listen, you’re a nurse right?  You’re not a tech or an aide, are you?  You have your license?’ I shot back an affirmative, ‘Yessir!’  He said, ‘Well good. Now come here and let me show you something…” That afternoon marked the first time I ever wielded a defibrillator in an actual case, assisting in a successful cardioversion. With one shock the patient returned to a sinus rhythm.  Dr. Luck thanked me, patted me on the back and said, ‘Good job.’

“I have a great sense of admiration for the way that Dr. Luck was able to simplify advanced concepts, breaking them down in a manner so that even a lay person could comprehend,” he continued. “In this case, Dr. Luck afforded me the opportunity to learn and practice new clinical concepts, making me the envy of other nurse interns.”

Patti Wengert, MHA, BSN, RN, director, nursing and operations for Heart and Vascular Institute, knew Luck since 1988 when she was a staff nurse in the cath and EP labs.

“He was a kind and gentle man who never raised his voice to anyone,” Wengert said. “He was always very patient and willing to explain anything and everything to anyone. It didn’t take long to see that Dr. Luck was an extremely knowledgeable person from whom everyone sought his advice and guidance.  He was an excellent physician, a great teacher, a mentor to many and a friend to all. “

Wengert also recalled his “Luckisms,” which she said will be fondly remembered: “You’re too kind,”  “You’re working too hard,” “It’s a struggle,” which more recently became “It’s a struggle for the elderly,” and, for when he was frustrated about something, “You’re killing me man.”

“The greatest gift he gave to me was to learn to relax,” Crosson said. “I remember doing a luncheon here when he first returned to the Medical Center and I was running around and trying to make sure everything was perfect. He said I was taking things way too seriously.  He was a mentor to me and I loved when he was here at Nyes Road because he made my job easy.  I will miss him more than I can say.”

For each, Dr. Luck has left a lasting impression.

For Sinoway, he was an example to emulate: “I suppose the best way to honor him is to try each and every day to emulate him: to have time for others, to always be compassionate and to always try to make things better for others. This is what we can and should try to do.”

For Naccarelli, he was a personal role model: “Dr. Luck will be sorely missed by all of his patients and colleagues. I wish I could have been like him. He was a role model for all of us.”

For Leuenberger he was a class act: “I felt privileged to have been exposed to him and I think all our fellows and trainees who got see him act are the better off for it. “When I think back on my training, it is clear that what mattered most was not the studying in the books and papers -although that is important – but to have had the good luck of seeing a “class act” like Jerry Luck to show me, not so much with words, but with deeds, how it’s done. He made the world a better place and we will hugely miss him.”

For Kipphorn, he was a giant in influence:  “When I went home that evening in 2004, I called my family and friends to tell them about ‘this really cool doctor’ and about how he had taken his time to help me master a new skill,” Kipphorn said. “Overall our encounter could not have lasted more than 20 minutes, but the wisdom he imparted that afternoon has endured.  If the measure of a man is based on the number of lives he touches in a positive way, then Dr. Luck was a giant.”

For Crosson, he was an inspiration: “His patients thought of him as a friend and so did I. He cared about people in a way that is rare. He honestly made my life easier and because he was so patient-centric he was loved by all.  He walked every patient out to the front desk and really got to know people as humans, not just patients. It is remarkable how many people he has touched in his life with his wisdom.”

For Wengert, he was a humble teacher: “He taught and inspired those he worked with. He demonstrated compassion for his patients, always had time for everyone and seemed to be able to ‘make everything better’ just by going into a patient’s room. Despite this, he was always a very humble person. He was a special man.”

Luck, of Harrisburg, was the son of the late Dr. Jerry C. and Gertrude Luck and was born and raised in Baltimore. He spent most of his adult life in Central PA. He was a graduate of the University of Pennsylvania and Temple University School of Medicine. Following his training at the Medical College of Pennsylvania, he worked as an assistant professor of medicine at the Baylor College of Medicine in Houston, Texas. In 1985, he returned to Pennsylvania and Penn State Milton S. Hershey Medical Center as director of electrophysiology and eventually professor of medicine.

He is survived by his wife, Kathy, as well as his two children, Megan and Carter.