Scholarships and awards contribute to one student’s success 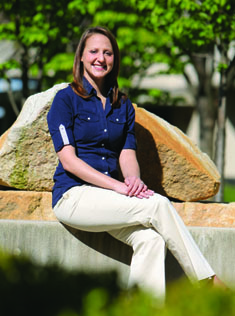 Originally from Wilkes-Barre, PA, attended Dickinson College and graduated with honors with a degree in chemistry and biochemistry/molecular biology. She is a first-generation college student who has persevered despite the many financial hardships and illnesses in her family.

Gortakowski has worked hard and overcome many obstacles to get where she is today. She graduated in May from the College of Medicine and began a combined medicine-pediatrics residency training program in July at Baystate Medical Center/Tufts University School of Medicine in Springfield, Massachusetts. She also got married in early 2012, which adds another milestone to an already amazing year.

“I just always knew that I wanted to go to college. I really liked Dickinson because it was a place that I could thrive academically and personally, and I was able to go with a lot of scholarships and financial aid,” Gortakowski said.

Gortakowski was a member of the Pre-Health Society while attending Dickinson College, which helped prepare her for medical school. “I’ve wanted to be a doctor since I was 6 years old,” Gortakowski explained. “This intrinsic feeling was further solidified through personal experiences in health care, shadowing my family physician and my academic endeavors.”

Gortakowski chose combined internal medicine and pediatrics for her residency because she loves working with both children and adults. She finds the depth and breadth of disease processes in both age groups to be stimulating and challenging. “The ability to work with patients of all ages and families as a whole is very rewarding to me. My future career goal is to become a Med/Peds hospitalist,” Gortakowski said.

During her time at the College of Medicine, Gortakowski was an active member of the Family Practice Interest Group and the Student Pediatric Society.

She was also the recipient of need-based and merit-based scholarships, including support from the J.T. Tai & Co. Foundation, the Graham H. and Elizabeth Jeffries Scholarship, the Arthur A. and Laura F. Waltenbaugh Scholarship, and three endowed alumni scholarships (Class of 1975, Class of 1989, and the Alumni Society Endowed Scholarship).

She is grateful for the awards she received, as well as the generosity of the alumni. “I would not be where I am today if not for the scholarships and financial support I received,” she said.

Gortakowski hopes to someday be able to give back to both Dickinson College and the College of Medicine. Her advice for other potential students from financially challenged backgrounds is to “work hard—it’s always possible if you really want to do it.”