From left, Molly Carney as Belle, Maddie Goss as Sleeping Beauty and Elizabeth Profeta as Elsa, share a laugh with 11-year-old Tymere Patterson of Harrisburg during the group’s visit to Penn State Children’s Hospital.

“The timing was perfect,” said Tymere’s mother, Tara Patterson, who with husband Terry Patterson was trying to ease her son’s fear before surgery for an inguinal hernia at Penn State Children’s Hospital. “I don’t think it really hit him about what was going to happen until we were actually in that room, and then he was very nervous—until the princesses showed up.”

The distraction of their visit—even though they were princesses and not Superman—was enough to put a smile on Tymere’s face and help him forget about the butterflies in his stomach.

“They really lightened the mood for all of us,” his mother said. “As a parent, you never want to see your child in the hospital, much less upset about being there. After the princesses left, we were still laughing, and Tymere didn’t talk about being nervous anymore.”

The princesses were actually Penn State College of Medicine students who volunteer with BraveCubs, an organization that brings well-loved characters to life for young patients at the Children’s Hospital. The name honors the bravery of the pediatric patients and is also a nod to the Penn State Nittany Lion.

Sponsored by the Division of Urology at Penn State Health Milton S. Hershey Medical Center, BraveCubs is the first collaborative effort of its kind at a medical school and academic medical center nationally, according to Dr. Amy Burns, pediatric urologist, faculty adviser and founder of the student interest group. 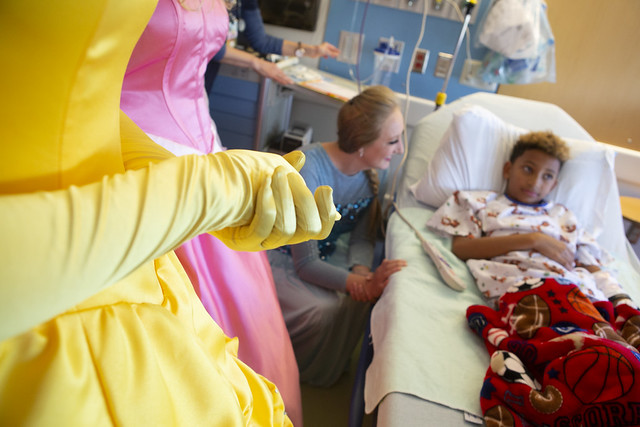 See photos of a BraveCubs’ visit to the Children’s Hospital.

“For a few minutes, the kids can just be kids again. It’s a powerful tool to ease anxiety,” said Burns, who notes another goal is to increase student interest in pediatric fields. “The word ‘brave’ just really resonated with me as I see how strong and brave our pediatric patients are. I just wanted to help bring some magic directly to their bedside.”

The children—whether 2 or 12—seem to forget their fear as they rush up to the costume-clad students, hug them and pepper them with questions about how they got to Hershey from their faraway kingdoms or Metropolis.

“Being able to do anything to brighten their days was our biggest motivation,” said Sayeh Bozorghadad, co-president of BraveCubs. “We find wherever we go—whether we’re strolling in the hospital lobby or making visits in the preoperative unit—everyone is receptive to us.”

“Kids won’t necessarily remember the experience of coming to the hospital, but they will remember how they felt, so we want to make it a positive feeling,” said BraveCubs Co-President Grant Owens, a third-year student.

It isn’t just the kids who get excited as Olaf, the loveable snowman from “Frozen,” or Snow White strolls by. Medical staff also light up when they cross paths with these well-loved visitors.

“Everyone has a little bit of kid in their heart. It’s good to bring it out once in a while,” Bozorghadad said.

In fact, Burns said she hopes the club can impact the anxiety and depression that providers, nurses and medical students may experience by investigating how participation in a group like BraveCubs improves their well-being and reduces burnout.

The students say being involved helps them as much as the kids because it’s a great stress reliever after hours of studying. “It’s a way I re-energize myself,” Owens said.

“It’s really easy to forget why we’re here when we spend all our time studying,” Bozorghadad said. “You forget the joy it is to just practice medicine.”

BraveCubs members have big plans for the future that include dress-up events for special needs children, home visits for chronically ill children and participation in community events. They also plan to host a “Princess Tea Party” and “Hot Dogs with Heroes” ticketed events for the community as a way to become self-sustaining and raise money for the Children’s Hospital, Burns said. Meanwhile, BraveCubs was honored to receive a grant from Children’s Miracle Network.

Third-year student Elizabeth Profeta, aka Cinderella, recalls the dad who recorded her entire visit on his cell phone. “I just imagine the family watching the video over and over to remember the time that Cinderella visited them in the hospital,” she said.

Molly Carney as Belle, top-left, and Elizabeth Profeta as Elsa share a laugh with Emily Davis, bottom-left, and other nurses.