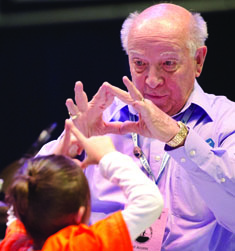 Charles Millard (pictured) and his wife Irma founded The Four Diamonds Fund on the day their son Chris passed away in 1972.

It all started with a call to arms—conquer childhood cancer—that hasn’t changed for forty years.  When the Four Diamonds Fund first appeared in 1972, there was little chance for a cure and treatment choices were limited. Since its inception, however, Four Diamonds has provided more than 3,200 children and their families touched by cancer the means to fight back.

From Despair to Hope

The vision for the Four Diamonds Fund began during the darkest days of Charles and Irma Millard’s life. In 1970, the couple was visiting Children’s Hospital Boston with their beloved 12-year-old son, Chris, who was being treated for rhabdomyosarcoma of the nasopharynx. There, the Millards discovered the Jimmy Fund, a program that covered all out-of-pocket medical costs for children receiving therapy for cancer at the hospital. “That’s where we came up with the idea to start a fund that would benefit families in central Pennsylvania,” Charles Millard says. “In 1972, on the day Chris died at Penn State Hershey Medical Center, we initiated the Fund.”

For the couple, then living in Elizabethtown, their main goal was to relieve the financial burden that other young families may face during their battle with cancer, while providing support for the best medical care available. “In the first five years, it was slow moving, but we continued to do fundraisers,” Millard says.  “We felt really thankful that we had the opportunity to take this negative experience in our lives—the loss of our son—and turn it into something so positive.”

A Place of Healing and Caring

The mission of the Four Diamonds Fund is to conquer childhood cancer by assisting children treated at Penn State Hershey Children’s Hospital and their families by funding superior care, comprehensive support, and pediatric cancer research.

Over the years, the organization has expanded its ability to take care of these desperately ill children. Today, a world-class team of professionals provide comprehensive medical care—including pediatric oncologists, nurse specialists, social workers and child life specialists. Some 100 new patient families benefit from Four Diamonds each year. That support includes getting the cost of all uncovered medical bills paid.

“Drawing on these resources, we are able to provide a level of cancer care, second to none,” says A. Craig Hillemeier, M.D., chair, Department of Pediatrics, at the Children’s Hospital. “If you are treating a child with cancer, you are really treating the whole family, and because of the Four Diamonds Fund, we are able to give a much more complete response to the terrible reality that the child and family experience.”

In 1973, after reading an inspiring story that Chris penned during his battle with cancer entitled Four Diamonds, Herb Kraybill, officer of Gifts and Endowments at Penn State Hershey Medical Center, knew he had found the organization’s name. Kraybill was instrumental years later in getting Millard onto a PSU student radio program, introducing the Four Diamonds Fund to the 1977 THON Overall Chair, Donald Mains, who then advocated for THON to adopt the Four Diamonds Fund as the beneficiary of the student fundraising efforts.

“When the Penn State students came in contact with the kids with the bald heads at THON it was love at first sight,” Millard recalls. “It just clicked and we’ve been married for thirty-five years.”  Since 1977, THON has raised nearly $90 million for the Four Diamonds Fund. “The steadfast determination of Penn State students really gave life to the Four Diamonds Fund,” Millard says.

And so, thanks to the generosity of donors and volunteers over the years, Penn State Hershey has been able to attack pediatric cancer from many different angles.  In 1999, the Pediatric Cancer Research Institute was established to fulfill the main mission of the organization—to conquer pediatric cancer. Today, Four Diamonds provides resources to attract top physician-scientists to the University to develop new understandings about therapy.

Among the investigations that the program supports are projects by pediatric oncologist Kenneth Lucas, M.D., who is seeking to develop immunotherapy to improve outcomes in bone marrow transplant patients. Additionally, Four Diamonds supports the laboratory of Barbara Miller, M.D. Under her direction, investigators are searching to identify the role of ion channels in cell proliferation, carcinogenesis, and chemotherapy resistance.

In 2007, the Pediatric Oncology Experimental Therapeutics Program was endowed by Four Diamonds with $10 million to give the cause—to develop innovative therapies that will increase the cure rate and reduce side effects of cancer treatment—even greater traction. “Five year survival rates for pediatric cancer may be 70 to 80 percent right now, but that’s not 100 percent,” Hillemeier says. “We need to make it so all children are able to defeat it.”

Support from the Four Diamonds Fund helped Bradley Heidrich survive the toughest battle of his life.  It began eighteen years ago, when the then eighth grader bent down at his school locker and felt excruciating pain in his right knee.  When the pain didn’t go away, his mother turned to an orthopedic surgeon, who delivered the diagnosis—bone cancer.

To fight the illness, Heidrich and his mother traveled from their home in the Lehigh Valley to Penn State Hershey Children’s Hospital. In a regimen that stretched over a year, Heidrich received chemotherapy and underwent multiple knee surgeries. During that time, his mother, a single parent, stopped working to take care of her son. “She never left my side,” Heidrich says.  “I always remember my mom being very, very stressed about health bills.” Fortunately, support from the Four Diamonds Fund eased that strain. “The worry over medical bills was totally taken off the table,” Heidrich recalls.

Today the 31-year-old Penn State graduate is pursuing his MBA and working at a pharmaceutical company, as a researcher in the early stages of cancer drug discovery. In his free time, he enjoys spending time with his wife and daughter. And, Heidrich, who plans to support the Four Diamonds Fund, is making no secret of his gratitude.

“I’d like to see as many people helped as possible,” he says. “The most important thing is to turn the negative into a positive. It motivated me to go into cancer research, and now I enjoy every moment to the fullest.”

The Millards didn’t set out to change the world alone. “When people say isn’t it great what you did, I say we didn’t do it, we came up with the idea, but thousands and thousands of students and volunteers did it, over forty years,” Millard says. “We are so pleased the Four Diamonds Fund has become such a positive force in so many people’s lives.”

These days, dance marathons called mini-THONS are catching on in middle schools and high schools. In fact, last year more than sixty schools, from counties across central Pennsylvania, held mini THONS raising more than $1 million collectively to benefit Four Diamonds. “It is a privilege to be a part of such a charitable organization that enables the faculty and staff at Penn State Hershey Children’s Hospital to more fully complete the mission of providing the best cancer therapy possible,” Hillemeier says. “The Four Diamonds Fund is one of the most fantastic win-win situations you can come up with.”