When the doctor becomes the patient 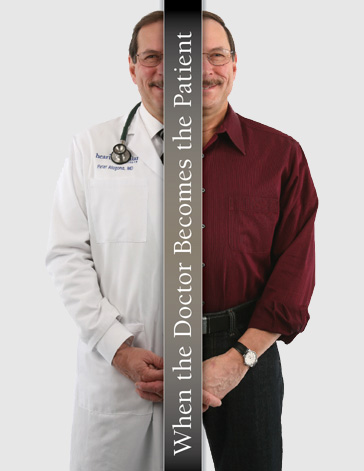 There are, of course, easier ways to bond with one’s patients. When asked what was a normal-appearing post-open heart surgery scar, many doctors would show the patient a photograph or do a simple visual assessment of the scar. But Peter Alagona, Jr., M.D., associate professor of medicine and radiology, Penn State Hershey Heart and Vascular Institute, on the other hand, lifted up his own shirt so they could compare their scars side-by-side. Like the patient, Alagona had earned his scar in 2009 during surgery to repair an acute aortic dissection, a sudden event for which he had no risk factors or warning. The fact that Alagona was even at Penn State Hershey Medical Center to have that surgery is a story in itself.

Raised on Long Island, New York, Alagona attended the Chicago Medical School before completing his internal medicine residency at Penn State Hershey Medical Center in the late 1970s. He then finished a cardiology fellowship at the University of Florida College of Medicine and spent twenty-seven years in Florida. But Hershey was still in the back of his mind and he often had conversations with his friend, Gerald Naccarelli, M.D., ’76, ’80R, associate clinical director of the Heart and Vascular Institute, about coming back to the area.

In 2006, Alagona decided the time was right to make a career move, and was intrigued by the work being done at the Heart and Vascular Institute. “I thought it was an interesting opportunity where I could use my years of experience,” he says. “And it was nice to come back to a place where we already had a lot history and friends.”

Searching for a cause
Like most patients who end up in the Penn State Hershey Emergency Department, Alagona had no reason to suspect that September 20, 2009, was going to be different from any other day. After spending the morning with his wife and having lunch, he entered his home office to do some work. Shortly after, his wife walked by the office door and found him unconscious in his desk chair. She quickly called 911 and then placed a call to their longtime friend, Dr. Naccarelli. “I have a feeling that if I had not been where I was that day, I would not have made it,” he says. “It only took a few minutes for the ambulance to get me to the hospital where Dr. Naccarelli and other colleagues were waiting. I don’t think my care was anything special. From what I’ve seen everyone at the Medical Center receives outstanding care.”

Since their patient was still unconscious, doctors were unable to get a medical history or quiz him on his symptoms. All they knew was that a healthy man was now unconscious. It took awhile and some guesswork to make the proper diagnosis. “It’s like being a detective,” Alagona says. “My heart rate and blood pressure were unremarkable, my labs were all normal, and nothing turned up in the numerous other studies that were performed.” It took close to eight hours of testing and careful watching before a CT scan of the chest uncovered a “dissection or tear in the lining of his aorta.” At that point, it became a race to get it repaired before it caused permanent damage or death.

Alagona was rushed to the operating room, where he remained for ten hours while surgeons repaired the tear and built a support around the aortic valve to prevent it from weakening in the future. Although the surgery was a success, the doctors had been concerned about neurologic injury and warned Alagona’s wife that it would take a little time before they knew what kind of a recovery he’d have.

An unwelcome bond with patients
Upon waking after surgery, Alagona, who had no memory beyond sitting at his desk days before, was told that he’d suffered from an aortic dissection. “I remember thinking ‘why did it have to be a dissection? Why couldn’t it be a bypass or something else?’” he recalls. “Undergoing a massive procedure like that is like having a hand grenade go off in your chest.” Nine days after he was rushed to the hospital, he was released to continue his recovery at home. He faced common side effects like fatigue, discomfort in his arms and head, and frequent fainting spells. He still notices a lack in stamina compared to before the dissection and also had hypotension or frequent drops in blood pressure that took a year to get better. But, he also developed a new bond with his patients and an appreciation for the work at Penn State Hershey. “Many of my patients were very concerned when they heard and have often asked about my health,” he says. “There was also a heartwarming reaction from my colleagues and many members of the staff.”

“I can commiserate or empathize better with patients now and understand first-hand what they are going through,” Alagona says. “It’s changed the way I approach certain things in a major way.”