September is Childhood Cancer Awareness Month. Treatment outcomes for children with cancer have made tremendous improvements over the past 50 years, but the reality is one in five children with cancer will die of their disease within five years. Four Diamonds is on a mission to change this reality. Join Four Diamonds as a Partner In The Fight to conquer childhood cancer by raising awareness and taking action. Visit FourDiamonds.org and #GoGoldFTK. Below is Alex’s story and her family’s experience with childhood cancer and how Four Diamonds has helped them. 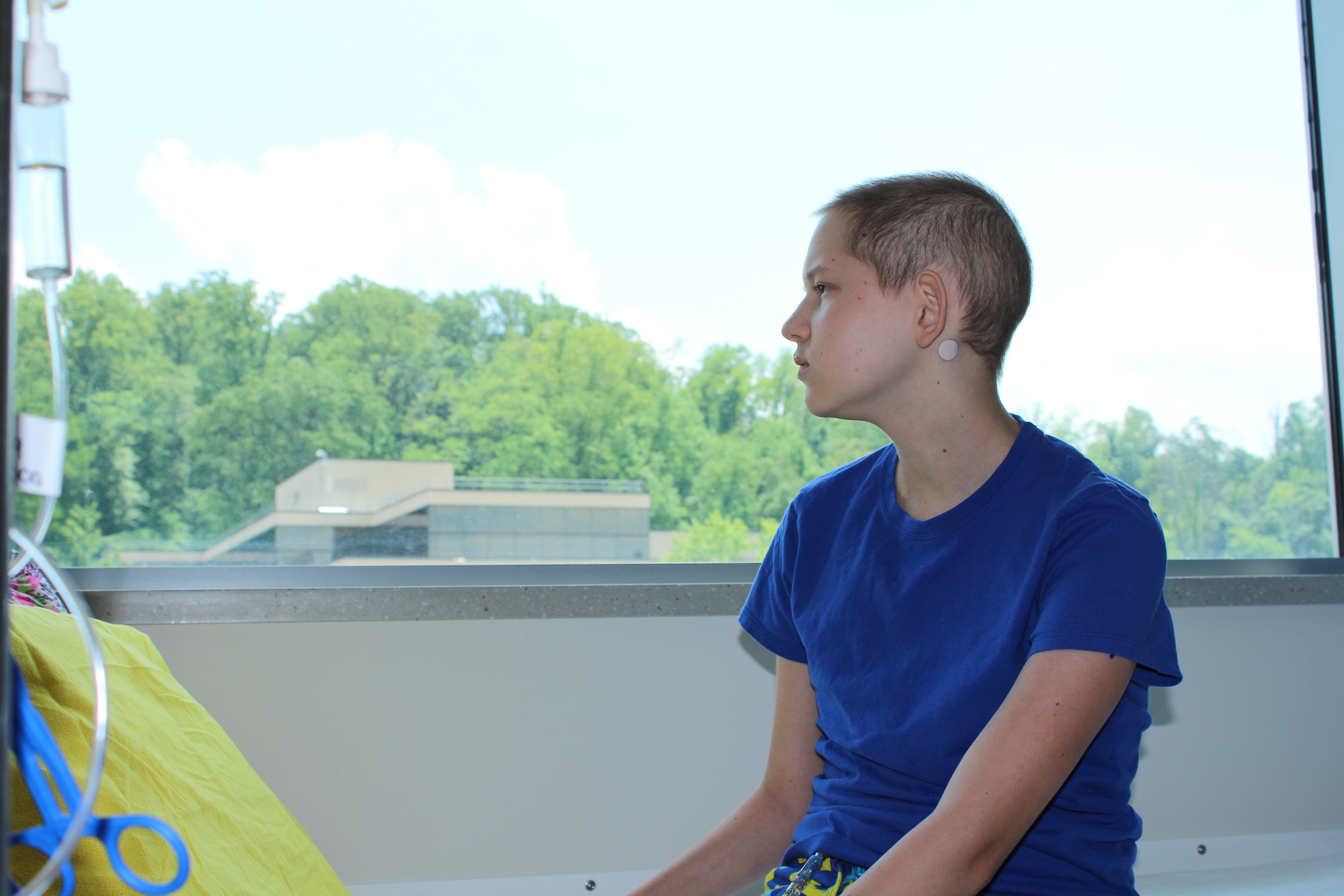 Aleksandra “Alex” Smith is, in many ways, your typical 14-year-old.

Upon meeting her, you quickly realize that she’s also unique. Alex was adopted from Russia when she was 7 months old and now lives in Carlisle with her parents and little brother.

She is funny and artistic and her mother describes her as delightful, engaging and entertaining. Although she has autism, she is mainstreamed and attends Carlisle Christian Academy.

All of that is part of the uniqueness that makes the avid Hershey Bears fan “Alex.” One thing that really sets Alex apart from her peers is that she is a Four Diamonds child, dealing with pediatric cancer.

On Friday, Jan. 6, 2017, Alex visited her pediatrician’s office because her joints ached, her lymph nodes were swollen and she had a low-grade fever. She returned home and collapsed from a fever spike. A blood test at a local community hospital emergency room led to a transfer to Penn State Health Children’s Hospital – something was seriously wrong.

“We had the weekend to mentally prepare ourselves,” said her mother, Laura Smith. “On Monday they took her in, they did the bone marrow and within minutes the doctor was there. He pulled up a chair, sat next to her and took her hand and said, ‘you have leukemia.’”

Within 48 hours of her diagnosis, the family’s social worker, Aubrey, introduced them to Four Diamonds and helped guide them through what is referred to as the “zombie state” of the first few weeks.

“Four Diamonds has been remarkable,” Laura said. “There really are insufficient words to describe how involved they have been through this entire process.”

When they first got the news, neither Laura nor her husband, both in their 50s, realized the substantial strides that had been made in childhood cancers since they themselves were children. They feared the worst. They now understand it’s through organizations like Four Diamonds and its dedication to research that helped make an 80 percent survival rate possible.

“They didn’t just give us a diagnosis on that Friday night, they actually gave us hope,” Laura said. “They gave us hope that at the end of two years, or three, or however long it takes, they will look at her and say ‘this is gone.’”

As Alex spent the first month in the hospital, the Four Diamonds team was there with her. For the first three weeks, the family worked through their emotions but began to realize their outpouring of emotions was counterproductive.

“The crying and the wailing doesn’t change the reality,” Laura said. “It’s better to deal with the reality than to waste the energy that we were on the emotions.”

The family has accepted that ‘the path is what the path is.’ 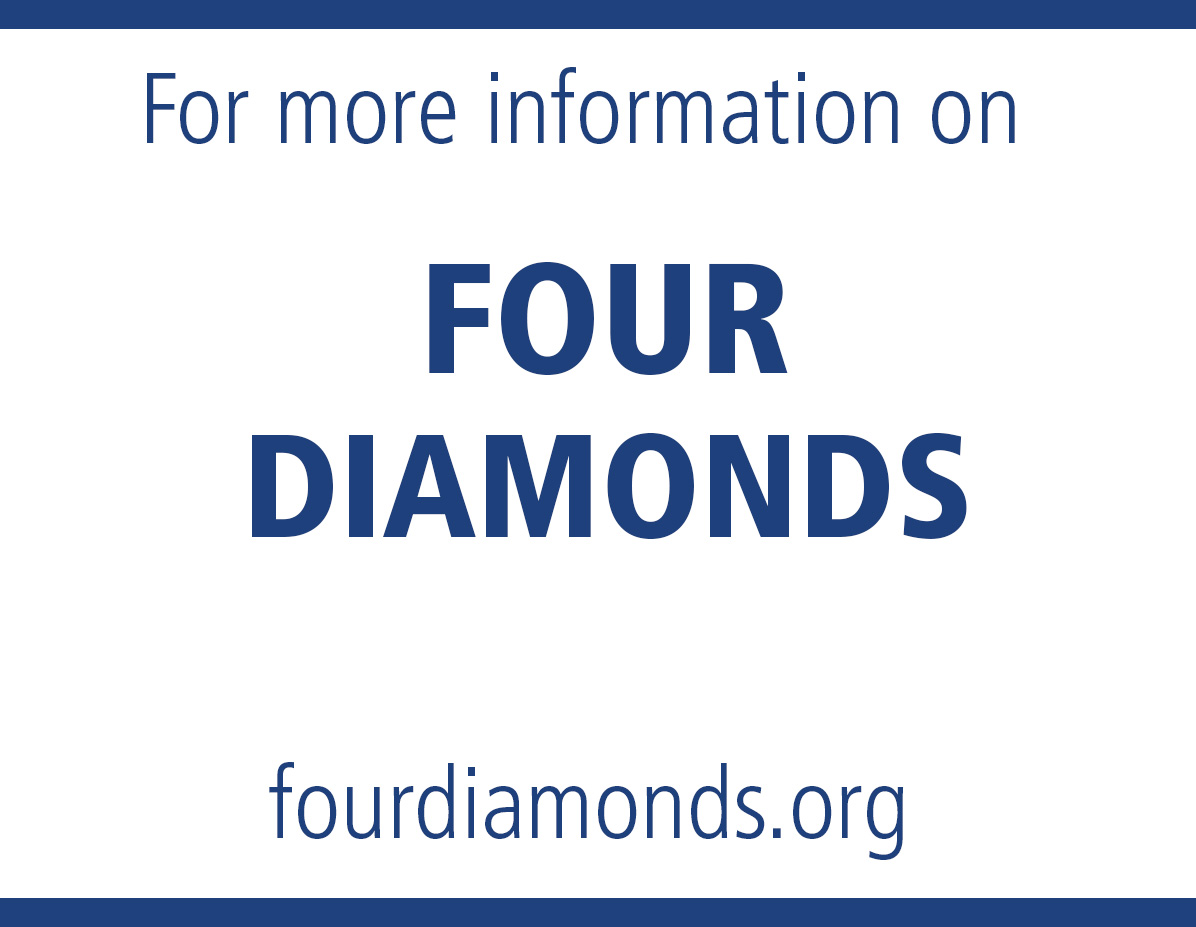 “You either deal with what’s in front of you or you go to pieces. We have a child that needs our help so we can’t go to pieces, we have no choice.”

Laura and her husband Richard are attorneys and fortunate enough to be able to work at home. They established a schedule where one of them is at home or at the hospital with Alex while the other works and cares for their son, Christian.

Like most children with autism, Laura said Alex tends to be less emotional and more pragmatic.

“She would tell you ‘this is what I have to deal with, so I will deal with it’,” Laura said.

And she’s dealt with it quite well. Alex went into remission during the induction stage of treatment, and the prognosis is good as she continues her maintenance therapy. While the results have been promising, treatment can be tough. Throughout the process, many services supported by Four Diamonds have been there for Alex and her family.

The chaplain visits regularly and the Smiths actively work with a nutritionist to combat Alex’s weight loss. Their family appreciates the support of the Child Life specialists who often sit and coach Alex through procedures, and she has also enjoys their fun activities.

While in the hospital, she enjoys music therapy, visits to the teen lounge and BINGO which is brought to her if she’s unable to leave her room. Most of all, creative Alex enjoys the art activities. She has built birdhouses and painted pottery and has been able to be herself. Most importantly, the activities sponsored by Four Diamonds have allowed Alex opportunities to be around other children fighting the same fight. Her parents encourage her to get out of her room and be with the other children because they understand each other.

“She got angry with me one day and said, ‘you don’t know what I’m going through,’” Laura said. And while they walk with her on the journey, in that moment, she realized, she doesn’t.

“But every one of those other kids do,” Laura said.

Four Diamonds facilitates this with group activities. When they’re given the opportunity to talk, they’ll compare battle scars like the bruises or marks where the IV or catheter have been or share their experiences in treatment. 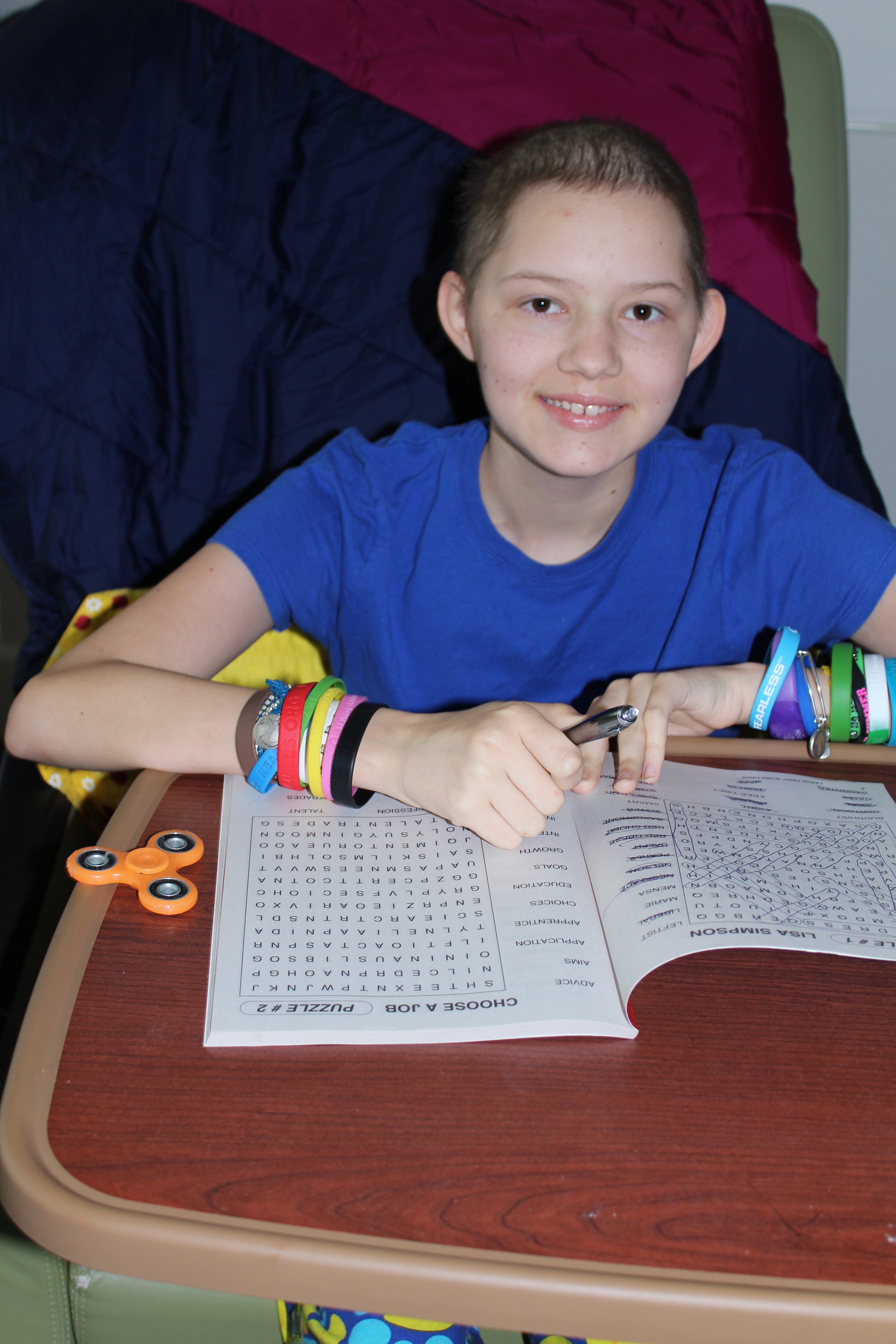 She believes the opportunity Four Diamonds provides for them to support one another is invaluable.

“As parents, we hold them up, but the other kids bring them a sense of peace and a sense of accomplishment,” she said.

As the young patients reach milestones in their treatments, they support one another. After a friend recently completed treatment, Alex stopped by his room to congratulate him and tell him he did an awesome job.

“He understands that she understands this is a journey that only they travel, and putting them together helps each one of them make it through,” Laura said.

Alex is one of a handful of teens currently in treatment. The Smiths have noticed that the majority of the children they’ve encountered are much younger. She often takes on the role of mentor with them.

“Sometimes some of them will feel sad that they’re in the hospital, they may feel alone and I’ll usually tell them it’s OK because there’s other people with them,” Alex said.

She also reminds them that they should not be afraid.

“Some of the little ones don’t like the nurses because the nurses have to give them shots or they put an IV in them, so sometimes I have to tell them that they’re just trying to help them and make them feel better,” Alex said.

For the older kids it’s different.

“The older kids have a more comprehensive understanding so they’re able to communicate with one another and talk to each other about their symptoms,” Laura said.

Alex and her other Four Diamonds friends have established a support network and will often visit or text each other as they go through treatment.

“My friend sometimes texts me and tells me it’ll be OK sometimes when I’m scared,” Alex said.

“The thing about Four Diamonds that makes it so unique and so special is the fact that they have services available for the entire family,” Laura said.

Their psychologist has been available to Christian, who has had trouble with the sudden changes in their family.

“Everything about his reality changed. That’s difficult for anyone to deal with,” Laura said. “He needed to talk to somebody about the fact that his entire life had been upended in a matter of four days.”

Christian is now down to a single parent household for extended periods since one parent is often with Alex in Hershey. And when they are together, his parents are often distracted.

“We are not focused on him the way that we had previously been and probably won’t be for a long time because every time the phone rings or every time we get an email, the first thought in our minds is ‘something happened to Alex,’” Laura said. “If she coughs, every single person, including the 7-year-old, freeze frames.”

If Alex gets up to walk across the room, everyone turns to look to make sure she doesn’t stumble or fall because her balance is off.

“All of that plays in to what his reality has become, which is vastly different from that two-parent household with two kids who are normal, healthy, and functioning,” Laura said. “When Christian goes to the hospital to visit and they do have music therapy or art, they include him. They make sure he’s part of this process, it’s not just all about Alex. The only way we get through it is together and if you don’t have another group that is reminding you that it’s all about the whole family, that can splinter.”

This is one of the reasons the Smith family has already begun to pay it forward.

“For her, it’s become about helping to raise money for Four Diamonds for people like some of the families she has met,” Laura said.

Alex and her grandfather started a letter writing campaign to introduce Four Diamonds to various Masonic Lodges and asked them to contribute to the cause. Several groups have given money in her name as a result.

Laura believes this experience has changed her daughter for the better and hopes it will continue to change her.

“We have told her that it will not only make her better, but it will make her stronger.”