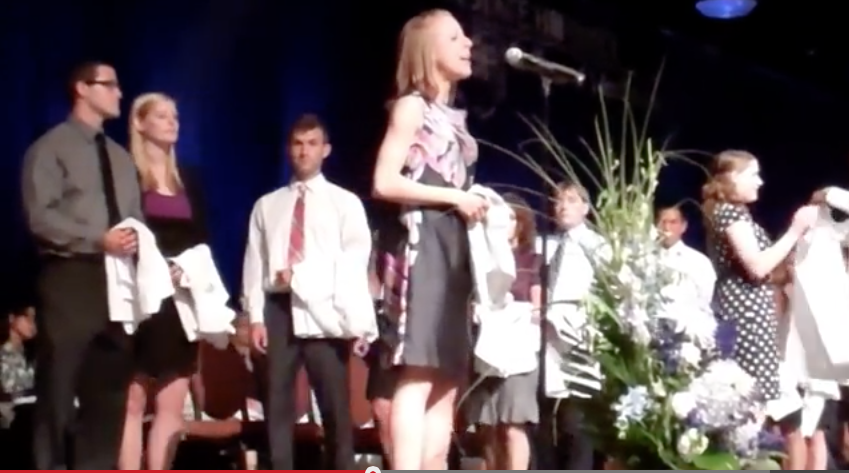 Carina Brown, four years ago at the White Coat Ceremony. See the video at http://bit.ly/1BPoqPh. Visit Penn State Medicine online after the Match Day Ceremony on March 20 for an update on Brown.

Four years ago, they walked across the stage at Hershey Lodge and Convention Center to receive their white coats, marking their entry into medical school and their time at Penn State College of Medicine. One by one they stepped to the microphone, said their name, hometown and school, and walked over to wear, for the first time, their shortened white doctor coats to identify them as medical students.

This Friday, the College of Medicine Class of 2015 will once again mark a milestone as its members prepare for the next phase of their careers: residency. At noon on Friday, the class members will rip open envelopes that reveal their residency destinations in an annual ritual called Match Day.

Fourth-year medical students began the residency assignment process months ago by researching, visiting and interviewing with directors of residency programs that interest them. In February, students and other applicants filed their rank-order lists of residency programs of interest. Medical program directors also filed their rank-order lists of applicants. The National Resident Matching Program, a private, not-for-profit corporation established in 1952, completes the match.

Penn State Medicine caught up with three students – Timothy Brown, Carina Brown, and Jon-Ryan Burris – shown as incoming students in a video of the 2011 White Coat Ceremony (view here), to see what they remember of that day, and how they feel as Match Day approaches.

ON THE WHITE COAT CEREMONY

“I remember holding my white coat timidly as I waited for my name to be called. I was a bit scared what the pressure would be like the first time I put it on. It felt like a heavy weight on my shoulders. I was so proud to wear the short white coat for the first time four years ago. Now I throw it on nearly every day. It is now worn, slightly off-color from tea and coffee stains.

I also remember my grandmother, who has since passed away, pulling at my coat, saying, ‘It is awfully short!’” – Carina Brown

“The funny thing was I stumbled over where I went to college. I seem to have forgotten with all the lights. I was excited for that day, to be welcomed as a medical student. It felt good to be on that stage because I worked hard to get there that day.” – Timothy Brown

“The white coat ceremony…wow. It is hard to think four years have passed already. I had just completed orientation with my classmates and anatomy was to begin three days later. I was thrilled to have the privilege to be a part of Penn State’s medical school class, and I was grateful to have the honor of wearing the white coat and one day serving patients and their families.” – Jon-Ryan Burris

A FAVORITE MEMORY OF THE PAST FOUR YEARS

“I had the opportunity to participate in the Patient Centered Medical Home elective. All of my best memories involve my patients that I have followed and cared for during the two-year rotation. One of my best memories involved making a home visit where I listened to my patient play the organ in her home. I met her dog. I watched TV with her and husband.” – Carina Brown 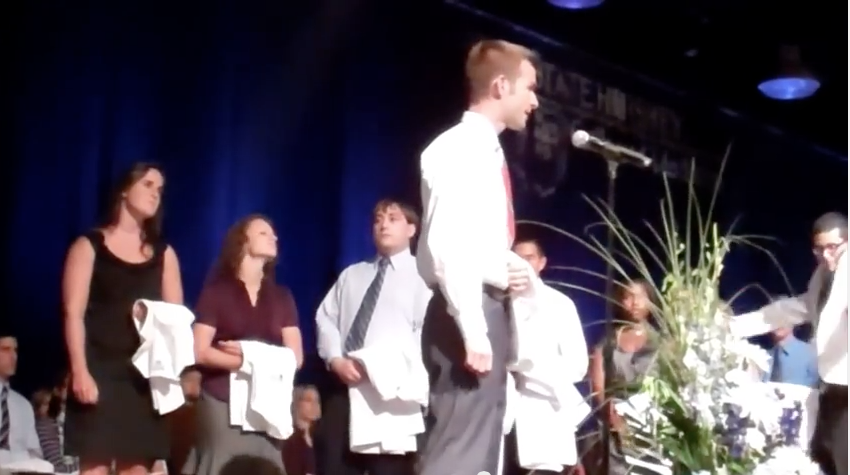 Timothy Brown, four years ago at the White Coat Ceremony. See the video at http://bit.ly/1BPoqPh. Visit Penn State Medicine online after the Match Day Ceremony on March 20 for an update on Brown.

“Over the last four years, I’ve met so many amazing people that it’s hard to pick out just one memory. It keeps getting better and better as we get to the end. It was a lot of hard work, especially the first two years, and then in the third year you get to put that knowledge to use. As we move to our next level of training, it is rewarding to get to apply our knowledge and begin to help our fellow human beings.” – Timothy Brown

“I have had some wonderful and endearing experiences with patients and their families that have been profound on my growth and development. Those experiences certainly have kept me hungry in wanting to learn more in order to become a better physician.

My favorite memories at Penn State Hershey are from my friendships that I have developed with a great group of guys who are my brothers in medicine. I have made lifelong relationships with these guys who are truly hardworking, honest, and dependable individuals that will be excellent physicians and potentially my future colleagues.” – Jon-Ryan Burris

ON THE ANTICIPATION OF MATCH DAY

“Anticipation for Match Day has been building, with this being a year-long process. I have mixed feelings. I’m anxious because I don’t know where I’m going to go, but I’m excited because I had a lot of great choices, which will all help me have a rewarding career.

There’s a lot of pressure from friends of family wanting to know where I will be for the next three years. It will be good to get to Match Day and finally have some questions answered.” – Timothy Brown 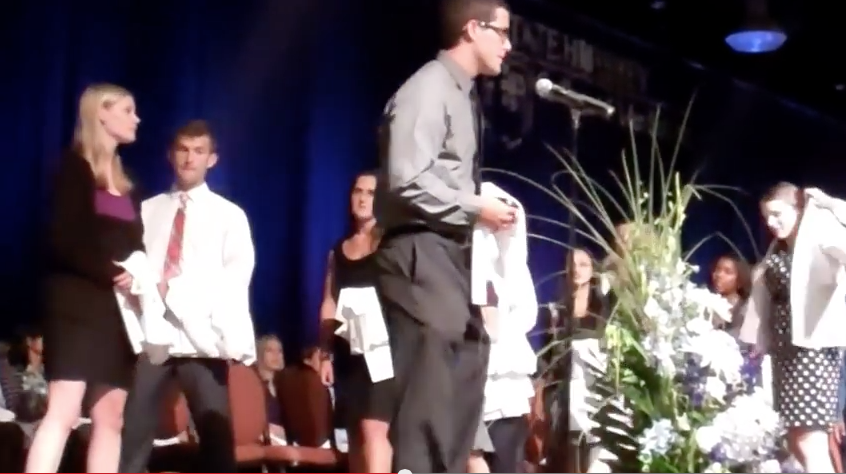 Jon-Ryan Burris, four years ago at the White Coat Ceremony. See the video at http://bit.ly/1BPoqPh. Visit Penn State Medicine online after the Match Day Ceremony on March 20 for an update on Burris.

“My first year of medical school, I lived with a fourth year student and I remember watching his excitement build up to the day. I kept thinking I absolutely cannot wait until it is my time. Three years later, I continue to have the same excitement. Certainly, I have a little bit of ‘pregame jitters,’ but I am excited to see where my next journey begins.” – Jon-Ryan Burris

ON WHERE THEY HOPE TO MATCH

“I hope to match into family medicine. I don’t care where. I loved all of the programs to which I applied. Family medicine is an exciting specialty because you get to see everything. You see the young, the old, the healthy, the sick.

I am couples-matching with my boyfriend, Matt. After completing our respective residencies, he hopes to complete a four-year fellowship in gynecological oncology. I plan to complete a fellowship in faculty development. I intend to practice for five to ten years in a Federally Qualified Health Center in an urban setting before moving back into academic medicine. Matt and I would like to live in Pennsylvania again in the future.” – Carina Brown

“I don’t want to say my top pick because I don’t want to jinx it, but I want to go into internal medicine and eventually get into oncology. My top choice has a national reputation, mentorship opportunities, fellowship potential and the ability to do meaningful research. The program and the residents there seem like a good fit.

I’ve wanted to get into oncology since I applied, and you get there through internal medicine. When I did my rotations, internal medicine really stood out for me. I found it intellectually stimulating, and it didn’t feel like work. I enjoyed going into the hospital and seeing the patients.”” – Timothy Brown

“I am pursuing a residency position in the field of pediatrics. I majored in nutrition as an undergraduate and found my niche of wanting to work with children during my college years. As I have progressed through my time at Penn State, my interactions with pediatric patients and their families in the Children’s Hospital solidified my desire for wanting to be a pediatrician. I am participating in the couples-match with my fiancée, Amy, who is a fourth year medical student at SUNY Upstate University in Syracuse, New York. She, too, is going into pediatrics. The main goal for the two of us is to end up in the same residency program and we hope to be somewhere within the Northeast, United States. I then want to pursue a pediatric critical care fellowship after the completion of my pediatric residency training.” – Jon-Ryan Burris

“I picked Penn State for the commitment to primary care and humanities. I had the opportunity to meet Dr. Dennis Gingrich during college. He was a significant influence in my decision to attend Penn State. I knew I would be able to receive strong primary care education in a supportive environment. The Department of Family Medicine is very strong. I hope to train in a similar environment, where primary care is viewed as the cornerstone of excellent healthcare.” – Carina Brown

“I’m from Carlisle and I always knew that Penn State Hershey has a reputation of delivering world class care. The Children’s Hospital was being built and the Cancer Institute had just opened when I arrived. I was impressed with the growth. I saw there is a lot of potential for my own growth to ready me for my career.

I’m really glad I came here. If I had to make the decision again, I’d make the same one.” – Timothy Brown.

“When I was interviewing for medical school four years ago, I found Penn State to be one of the most welcoming places I visited. The faculty and former students had a true respect for the institution and their positive energy stuck with me throughout the interview process at other places. I felt that Penn State could offer me a medical education beyond the books and knowledge and provide me with more focus on bedside manner and patient care, which is an aspect that I feel is crucial to being a doctor.” – Jon-Ryan Burris