‘I would like to lead by example with trust and integrity’

After enjoying several years of continued growth, Penn State Hershey is facing challenges it hasn’t seen before. Health care reform is changing the industry at a remarkable pace, upending the business model that has helped fund the College of Medicine since its beginning.

A tight funding environment requires its researchers to find new resources to complete cutting-edge basic and health science. In addition to evolving educational models and technology, new curriculum must be developed and implemented to train the next generation of health care providers for a rapidly changing industry. 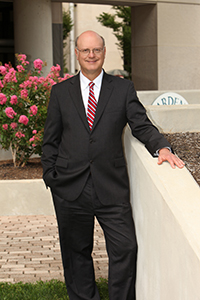 Leading the campus during a unique time of transition is Dr. A. Craig Hillemeier, named the seventh dean of Penn State College of Medicine, as well as Medical Center and Health System chief executive officer, and senior vice president for health affairs in July. He replaces Dr. Harold Paz, who had led Penn State Hershey since 2006.

“I really have a good feeling about the role that this organization can play in providing care to central Pennsylvania, educating health care providers, doing good research and providing service to the community,” Hillemeier said. “Having been here for 13 years, I’m very passionate about helping this institution succeed in its missions. The opportunity to lead this organization during a time when there are so many challenges in the health care environment is exciting.”

A critical priority for Hillemeier is helping the clinical enterprise thrive so that the College of Medicine can continue its important missions.

“The success of our clinical enterprise is essential to supporting our College of Medicine,” Hillemeier said. “However, the business model that has been the foundation of so much of our success is threatened with the growing consolidation that is occurring in the market, as well as the changing payment models like population health. Our longtime strategy of caring for small numbers of high-risk patients from across central Pennsylvania is threatened by the creation of health care systems that will inevitably try to manage the care of those patients within their own health systems. So the patients who come to us for care will likely diminish in the absence of any other strategy.”

Penn State Hershey is currently proceeding with plans to acquire Reading-based St. Joseph’s Regional Health Network and is continuing talks with Harrisburg’s PinnacleHealth regarding a new, combined health enterprise. These are just two of the most obvious ways Penn State Hershey is expanding its reach across a broader geography and population base.

Changes in payment models through health care reform make the increase in patient scale imperative. Instead of reimbursement on each measure of care provided, payments will soon be made by how well providers can manage the health of specific populations of patients. It’s a dramatic shift in the way providers think about and deliver patient care, with a stronger focus on prevention and team-based care management.

Through the success of the clinical enterprise, the education and research missions will be better supported. Those areas, Hillemeier said, have tremendous opportunity.

“In terms of education, we have the opportunity to continue to evolve our curriculum so that our students become more focused on patient-centered care, safety and quality, and that they learn even more about how to function as a member of the health care team at which the patient is the center.

“I also continue to be extremely impressed by the dedication that our graduate students show towards discovery,” he said. “I recently had an opportunity to talk to them at their graduate oath ceremony, which introduces newly-admitted students to the institution. I was very impressed by their commitment to make the world a better place.”

In research, the development of the Cancer Institute and the Institute for Personalized Medicine are just two examples of how the mission is advancing in ways never thought possible a decade ago.

These are all opportunities and challenges that Hillemeier believes the staff and faculty are ready to tackle.

“We are really good here at collaborative work,” he said. “The campus is really good at figuring out how to use the resources of lots of different people to make projects work whether they are clinical, educational or research projects. That’s a real value.”

In addition, he believes in the character of the Penn State Hershey workforce.

“I think the people of central Pennsylvania are good-natured people,” he said, “They have integrity, respect, honesty and they are people their colleagues can trust.”

Change can be stressful, but Hillemeier hopes staff will understand why it’s necessary.

“I think it’s important that people understand why the change is necessary and that while change can be somewhat anxiety provoking, the absence of change is likely to lead to our inability to continue to be successful in our missions,” he said. “So we should be focusing on how best to allow the workforce, the faculty and the staff here, to best adjust to accommodate that change and to make that change as successful as possible.”

In leading the organization through this dynamic period, Hillemeier would like to be known as a dean who is a straight-talker and encourages a culture of mutual respect.

“I would like to be known as a person who led by example and inspired people to realize the greatest potential out of the resources they have,” he said. “I would like to lead by example with trust and integrity. I want people to know that I’m being transparent and very straight forward in what I think is the right agenda for this institution during this time of challenge. I want people to feel they can believe what I say and that their opinions will be treated respectfully.”

“I think it is very important to have a strong sense of values to make decisions,” he continued. “These values, such as truth, honesty, integrity and trust, are the guideposts by which you make any decision. If you make a decision that is consistent with these values, then you will not have a reason to regret it.”

Since entering the role, Hillemeier has been updating employees through campus-wide emails and a number of town hall meetings.

“Communication to an organization this large is not easy and the guideline I go by is that you can never communicate too much,” he said. “Since everyone gets their information in different sources it requires a real effort to make sure we keep all members of the organization up to date. “

Hillemeier graduated from Loyola University Medical School, where he also completed his residency in pediatrics. He completed his fellowship in pediatric gastroenterology at Yale New Haven Medical Center and was a member of the faculty at Brown University between 1982 and 1988. Hillemeier served as division chief of pediatric gastroenterology at University of Michigan Health System and later as associate chair in pediatrics from 1988 to 2001. He is also immediate past chair of the board of directors for the American Board of Pediatrics.

His wife, Marianne, is head of the Department of Health Policy and Administration (HPA) at Penn State. His son, Tom, is a chemical engineer for Mondelez and his daughter, Mary, works for a community-supported agriculture business.