You’re a teacher in a preschool classroom of 4-year-olds. You interact with children, parents and support staff on a daily basis. You are concerned that a child may be being abused. How can you be sure if there is enough to constitute reasonable suspicion? What do you do about it? How do you handle resistance from colleagues? 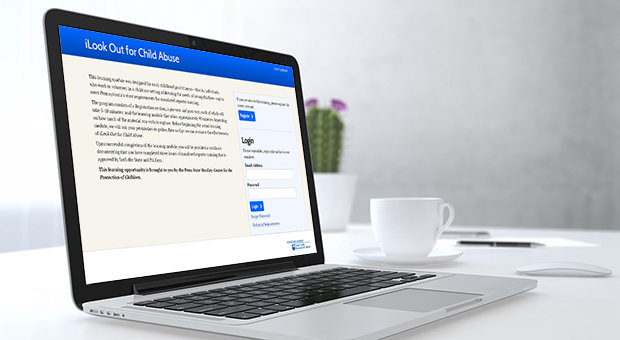 A new, free, online training module created by Dr. Benjamin Levi, director of Penn State Hershey’s Center for the Protection of Children, takes childcare providers and employees of daycare centers through an interactive, story-based program that gives them the experiential learning they need to more accurately identify and report suspected abuse.

The module launched just in time to help childcare providers comply with a Pennsylvania law that went into effect at the beginning of the year requiring completion of three hours of training on the subject.

Levi has spent 12 years researching reasonable suspicion, and 2 1/2 years creating the interactive training course to engage those who are often most likely to encounter the signs and symptoms of abuse.

“Three out of four children who die from child abuse are younger than 5, yet childcare providers have one of the lowest reporting rates of all mandated reporters,” Levi said. “And yet they serve the most vulnerable population.”

The training at iLookOutForChildAbuse.com begins with a 10-minute pre-test, followed by the 90-minute, story-based experience and a 10-minute post-test. It also includes handouts and post-training resources. Participants must stop to answer questions, make decisions and render judgments along the way, just as they would in real life.

“It’s not just information delivery,” Levi said. “It’s about helping people connect and see their own role in it all.”

He recruited an international team that included educational instructional designers, experts on child abuse and victim assistance, legal experts as well as experts in evaluating mandated reporter training. Together they worked to validate both the learning module and the effectiveness of the evidence-based training.

“The idea is to really push people to think about when to report their concerns, as well as how to deal with resistance from colleagues,” Levi said. “The hope is more people will become sensitive to and aware of the issue, as well as know the right questions to ask of themselves, their colleagues and the children they encounter.”

The next step will be to track results and see if, in addition to increasing knowledge and changing attitudes, iLookOut changes reporting practices and the outcomes for children.

“We will continue to do research on iLookOut,” Levi said. “Our goal is to help people do a better job protecting children.”

Act 31 of 2014 – the law requiring the training for licensed professionals and early childcare providers – is just one of more than 20 new laws Pennsylvania has passed since December 2013 that significantly alter how the state defines, reports and investigates child abuse and neglect.

“That just tells you we have been working at this for a while now and abused children in PA have been in need of a level of reforms and enhanced protection for quite some time,” Cathleen Palm, founder of the Center for Children’s Justice, said. “We had built some momentum, but… it took a long time for people to understand that.”

A 2010 study surveyed 1,400 mandated reporters – licensed professionals who interact with children and are legally bound to report suspected child abuse – and found a level of confusion about when and how to make a report.

“We realized there was a real need for training,” Palm said. “We ask them to have this legal responsibility, but then we didn’t give them the tools to know how to fulfill it.”

Pennsylvania is widely known to have markedly lower reporting rates than anywhere else in the country, according to Levi.

Palm said some of the most significant injuries are among the pre-K crowd: “As you can imagine, the early years are times of both great joy, but also great struggle. Infants cry a lot, then comes potty training and child development issues – all that can become very frustrating if the parent or caregiver doesn’t understand it.”

Young children’s connections to the outside world are also more limited than those of school-aged kids, which makes it especially important for daycare and preschool providers to understand the warning signs. “If (a child) is in an early-childhood setting and the providers get to know them well, they will get to know something about family dynamics, the level of interaction and involvement as parents drop them off and pick them up.”

Delilah Rumberg, CEO of the Pennsylvania Coalition Against Rape said sometimes people simply don’t know what to look for, or, they may suspect something is going on, but are hesitant to accuse someone of inappropriate behavior. Her organization has provided services to children who have been sexually abused for 40 years and works with 50 rape crisis centers.

“I tell everyone to trust their gut because most of us know when something isn’t right,” she said. “It’s not up to us to investigate, just to let people know and give them the information.”