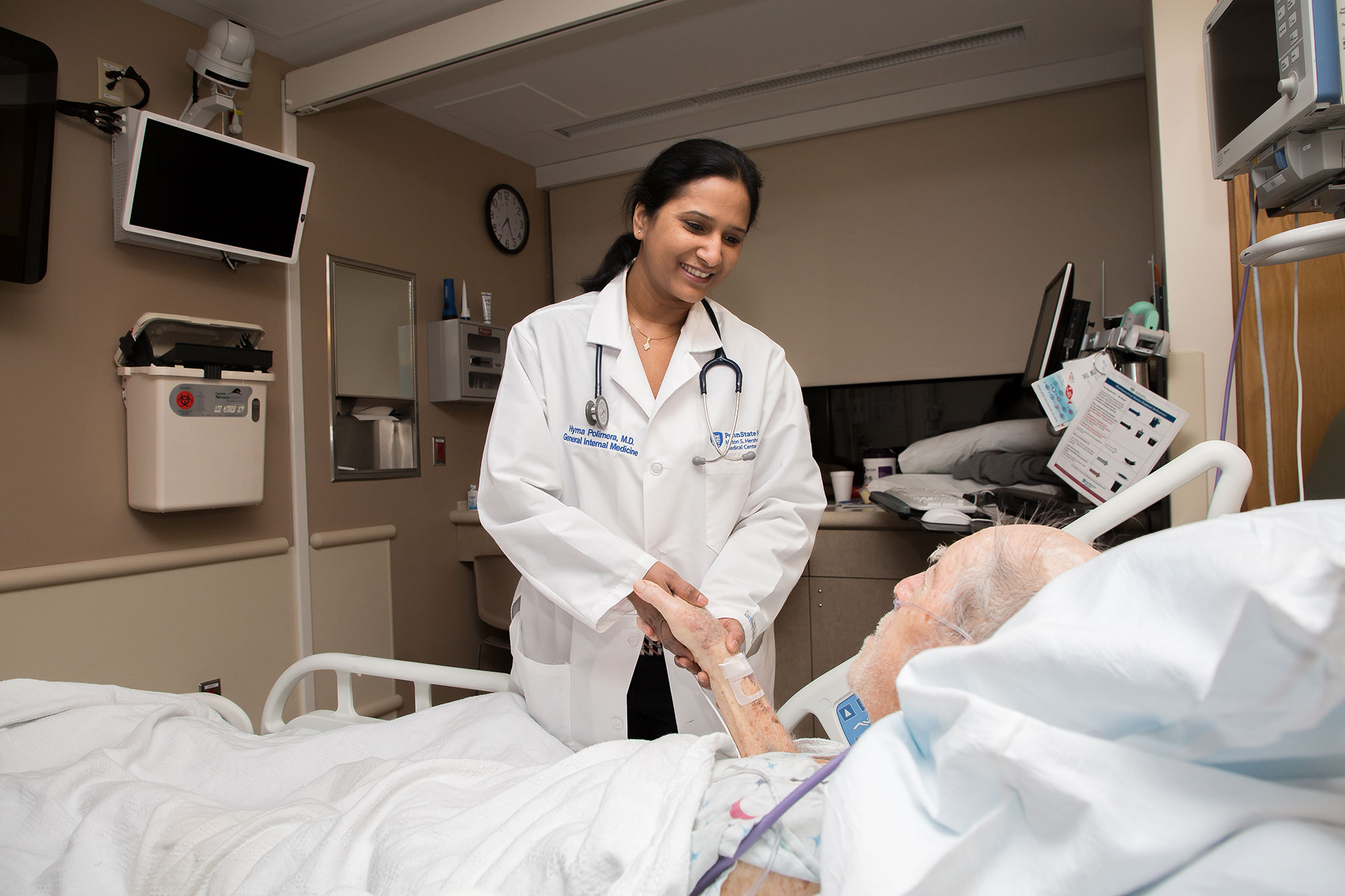 Sometimes you make history quite unexpectedly. Such was the case for Dr. Hyma Polimera, an internist at Penn State Health Milton S. Hershey Medical Center ­– and the hospital itself.

Polimera grew up in India and had long dreamed of becoming a physician. That dream materialized when she graduated with honors from Andhra Medical College in 2004. After moving to the U.S. in 2008 and completing a residency at St. Luke’s Hospital in Bethlehem, Pa., she joined the Milton S. Hershey Medical Center in 2014.

One fall day in 2016, she met a patient suffering from multiple chronic conditions, including dementia. Polimera introduced herself, and the patient’s daughter, who was his caregiver and power of attorney, immediately asked if they could have another physician. Polimera was blindsided. “May I ask why?” she inquired. But the physician suspected, and the woman confirmed: “I’d like to see an American doctor.”

That encounter sparked a sequence of events that would affect not just Polimera and Hershey Medical Center but the entire Penn State Health system and health care providers throughout the nation.

Polimera immediately contacted her supervisor, reported the incident and the change-of-physician request – as did the charge nurse on duty – and waited for instructions on how best to proceed.

Dr. Brian McGillen, director of hospital medicine at Hershey Medical Center, asked Polimera whether she was comfortable treating the patient. He knew that she was qualified. When she responded yes, he informed the patient’s family that a provider would not be changed simply because of their ethnicity. That decision was the first step in what would become an official Penn State Health policy. Beginning in May 2017, Penn State Health’s Patient Rights and Responsibilities policy was updated to include a section stating that patients cannot decline the care of a provider based on the provider’s race, religion, gender, age or sexual orientation.

Penn State Health became one of the first health care systems nationwide to establish an official anti-bias policy that protects providers when such cases arise. The policy applies not only to Hershey Medical Center but to the entire Penn State Health system.

Lynette Chappell-Williams, chief diversity officer and associate dean of diversity and inclusion for Hershey Medical Center and Penn State College of Medicine, led the charge but notes that the process moved swiftly because of broad and immediate consensus by Penn State Health leaders.

“It is essential that we embrace all providers and all patients if we are going to maintain that respect is the foundation of our care,” Dr. Hillemeier says. “As we move forward, for the well-being of our patients, students and employees, our organization has committed to becoming a national leader in inclusivity.”

The issue of patients discriminating against health care providers is not new. Chappell-Williams says the issue has been escalating in recent years. U.S. demographics are becoming more diverse and so, too, is the health care provider population. In fact, a Jan. 22 Wall Street Journal article spotlighted incidents across the nation as well as Penn State Health’s new policy.

Chappell-Williams immediately received calls from throughout the U.S., ranging from small local hospitals to well-known institutions like Minnesota Children’s Hospital, all grappling with how to handle a growing problem.

Dr. Thomas Tracy, chief medical officer at Hershey Medical Center, points out that the day Polimera was asked to step aside, there were three other physicians on duty – all also ethnic minorities. Shifting physicians without reason compromises patient care, he said, as it takes needless time for a new provider to get up to speed on the patient’s condition. In addition, it places an unfair burden on providers who are pulled in unexpectedly, which could lead to frustration and burnout, both among ethnic providers who encounter discrimination and other providers burned out from overload.

Chappell-Williams notes there are some exceptions to the anti-bias policy. A female patient can request a female provider for gynecological care, for example, for reasons of religion and/or trauma. And, for those who argue that all patients should always have the right to choose, Chappell-Williams doesn’t disagree.

“Patients do have the right to choose their providers. They just can’t do it in a discriminatory way based on an aspect of diversity.” In fact, Chappell-Williams adds, patients deserve the very best of care, and that often comes from a person of another ethnicity. “The very provider who may be tops in their field may indeed be from a diverse background.”

Interestingly, she adds, patients who have requested a provider change but were denied later acknowledge they had no issues with the quality of care given. Regardless, the incidents run rampant, and health providers nationwide are pressed to respond.

Emily Whitgob, a researcher at Stanford University, reported on the issue of patients discriminating against providers in a paper published in the journal Academic Medicine. In a 2015 study of Stanford pediatric residents, 15 percent had experienced or witnessed incidents of discrimination. One that Whitgob witnessed sparked her initial interest in the issue, and further study only reaffirmed the extent of discrimination.

“I had an intern who came back and told me about an incident where the patient looked at her nametag, asked if she was Jewish and then asked for another provider. “It took me aback,” she said. “I’d never encountered that.”

Afterward, Whitgob scheduled a debriefing with some 30 colleagues. “A lot of people broke down crying,” she recalls. “They had also experienced discrimination but hadn’t had a chance to talk about it.”

As health care providers, she said, the priority is always to provide the best of care and put the needs of patients first. “But,” she says, “giving the family what they’re asking for can be a really negative thing if it involves discrimination. And institutions are losing talent because of it.”

Whitgob commends Penn State Health for developing an official anti-bias policy that protects their providers and for sharing it within the medical field.

“The stance they’ve taken is a proactive one, and making it public is really significant. It doesn’t prevent discrimination,” she notes, “but the consequences are clear. And wouldn’t it be great if medicine becomes a leader in not tolerating discrimination?”

Chappell-Williams, meanwhile, considers it an honor and a privilege as well as a necessity to create such a policy and expand its use and availability.

She recalls two incidents that occurred last fall, one in which a family member did not want her relative cared for by someone “different” and a second in which a new hire was walking down the corridor when a passerby told her to “go back to her country.”

“Health care providers have long assumed they were expected to tolerate such incidents of disrespect and discrimination,” Chappell-Williams says. “What we try to help them understand is, ‘No, you do not.’ What Penn State Health’s anti-bias policy has done is empower them to come forward.

“For health care teams to provide quality care for patients today and in the future, we have to have a workforce that cultivates respect. This policy helps to create a culture of respect between patients and providers.”

Chappell-Williams also says it’s not enough just to have a policy, there also must be a formal protocol in place so that patients and employees know what to do when incidents of discrimination occur. To that end, Penn State Health will provide training opportunities to staff and employees that explain the policy and include role-playing exercises. Reporting mechanisms are also being developed to track when and where incidents occur.

Whitgob emphasizes that Penn State Health’s anti-bias policy not only protects health care providers but makes the system a more appealing place for prospective hires because they know that discrimination won’t be tolerated. “They’re better able to retain clinicians and also attract faculty and trainees.”

Polimera, for one, is profoundly grateful for Penn State Health’s strong position on the matter, both then and now. “I absolutely felt supported by the hospital administration,” she said. “Once I informed them about the incident, they came right in and handled it. They denounced the racism that was displayed and put an official policy in place that empowers other providers in the event that such incidents occur.

“Moving forward, we can reference this policy and show patients that discrimination on any level will not be tolerated. I am proud to know that Penn State Health has acted to implement such positive steps for both patients and providers.”