In a typical school year, it takes the nurses of the Lebanon School District four months to conduct health screenings of the entire student body. This year, that effort is expected to take just two days thanks to the involvement of nurses from Penn State Hershey Medical Center.

The Medical Center nurses are teaming up with the district’s nursing staff to conduct vision, hearing, height, weight and scoliosis screenings for students. Nearly 60 Penn State Hershey nurses visited three of the district’s schools on December 7 and more than 75 have returned to the remaining four schools today (December 14). Normally, district nurses would team up to do the student health screenings, leaving their own buildings short-staffed. But this initiative spares the nurses precious time that they can now spend helping students in their respective schools. 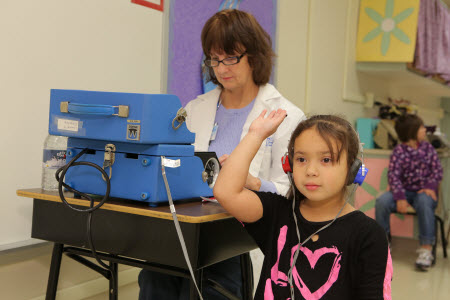 Hearing tests are part of the health screenings that Penn State Hershey nurses are helping conduct in the Lebanon School District.

Some of the information gathered will be provided to parents in the form of letters stating their child’s height, weight and body mass index (BMI). So-called BMI letters are common. In fact, every year, parents of all school-age children in Pennsylvania receive one from their schools. But this effort is unique because some of the letters sent out in Lebanon will feature a new format. The Center for Nutrition and Activity Promotion (CNAP), which is part of the Department of Public Health Sciences at Penn State College of Medicine, has drafted a revised BMI letter based on survey feedback from parents across Pennsylvania who said they wanted better explanations of health risks and a more detailed course of corrective action. CNAP plans to submit the revised letter to the Pennsylvania Department of Health next year in hopes that the new format will be adopted by all public school districts across the commonwealth. CNAP’s efforts to revise the BMI letter are funded by a grant from the Highmark Foundation.

“You wouldn’t throw away a letter that says your child failed his vision test,” she said. “So if we’re telling you that your child is underweight, overweight or obese, we want you, as parents, to realize the risks and take action.”

Sending out the BMI letters to parents in the Lebanon School District offers researchers the opportunity to test the revised format in a diverse population, McCullough says.

The Lebanon School District was chosen for the health screenings due to a community health needs assessment of five South Central Pennsylvania counties conducted earlier this year. It found a high level of need in Lebanon County, according to Judy Dillon, M.S.N., M.A., R.N., nursing community outreach coordinator at Penn State Hershey.

“There are many families in Lebanon County without access to affordable healthcare,” Dillon said. “Schools continue to be an important source of health screenings and information for children, especially children of low income families.”

According to Lebanon School District Superintendent Marianne Bartley, 80 percent of Lebanon’s 4,850 students face financial difficulty. Bartley is grateful for the partnership and believes it will help the district tremendously.

“If the student needs vision or hearing assistance, those things are critical to get support with because they impede academic progress,” Bartley said.

The students’ health data is being gathered electronically using Health eTools for Schools, a data management system being developed by InnerLink, Inc. and funded by the Highmark Foundation. The data will be shared with the Department of Public Health Sciences which will then evaluate the information and present the district with a health assessment that includes an action plan.

CNAP plans to return to the schools in Lebanon at the start of next year to present action plans that will consist of customized programs designed to improve results. This information will help the district determine which students would benefit from nutrition programs and other services.