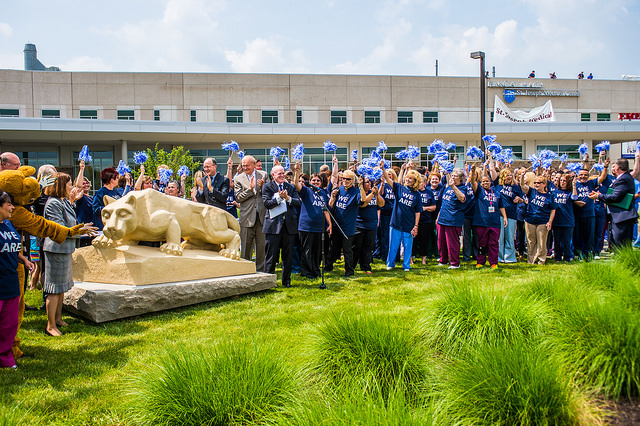 The unveiling of the Nittany Lion statue at Penn State Health St. Joseph.

When Dave Ruppert found himself in the emergency department of St Joseph Medical Center in Reading in 2012 with symptoms that eventually led to a diagnosis of pancreatic cancer, he also found a new healthcare home. Impressed by the professionalism, personal attention and level of service he found at St. Joseph during that tough time, Ruppert later had all his medical services transferred to St. Joseph.

“It wasn’t just any one person, but everyone from the providers to the billing department,” he said. “They are willing to help you out, they understand you and you don’t get shuffled around. They take care of you as an individual, not as a number.”

When it was time for surgery, Ruppert benefitted from St. Joseph’s oncology partnership with Penn State Hershey that meant he was able to get the highest level of care through recommendations from local doctors.

<<View photos from the recent welcoming ceremony for St. Joseph.>>

“I always recommend St. Joseph to people, and I have high expectations for this,” he said. “I think it’s a really good move.”

Ruppert isn’t the only one who believes St. Joseph is a special place and that becoming part of the Penn State family will only improve it.

Marc Rovito, medical director of St. Joseph Cancer Center, has been a Penn State employee at St. Joseph for four years through a provider-service agreement with Penn State Hershey.

The partnership has provided stability after a period of turnover, he said. Patients, such as Ruppert, are being provided with the services they need closer to home, with referrals to Penn State Hershey colleagues as necessary.

He anticipates stronger collaboration in other specialty areas as well, now that St. Joseph is part of Penn State Health.

“I think some of the other services that have been here for a long time are going to round out and grow now,” he said.

“The Penn State brand is associated with good, academic, quality care, and although St. Joseph is a smaller-sized hospital, it is very high quality with a high level of personalized service. Combining the two is great for us and it’s a good thing for patients.”

Monica Rush has worked for St. Joseph for more than 26 years and has seen plenty of changes. Now the director of rehabilitation for Penn State Health St. Joseph, Rush said she is excited for Penn State to bring its level of services to Berks County so local residents don’t have to travel as far from home.

“Penn State has such a good, strong reputation with its programs, development, outcomes and resources. It’s going to be a positive change,” she said.

Rush said the smaller size of St. Joseph makes it a nice place to work; an environment where people support each other and work well together.

“I think you tend to be more accountable for your actions because everybody knows everybody,” she said. “When I bring people in for interviews or have students shadowing for the day, their first comment is how nice everyone is here. I think that is because there is that respect for each other.”

Rush said the community seems to value St. Joseph initiatives to reach out and provide high-demand services, especially at its downtown Reading campus. Poverty rates that are among the highest in the nation for a city of its size — as well as managing health issues common to cultural communities– create unique challenges for health and wellness.

A pregnancy program reaches out to introduce expectant mothers to good habits earlier in their pregnancies, a diabetes nurse and nutritionist run programs in the community, and Rush herself oversees a medical fitness program to help combat weight-related health issues.

Hillkirk already hosted a retreat on campus for St. Joseph staff and advisory board members (inspired by Spirit Plant Journeys retreats) to meet and interact with staff and board members of Penn State Berks. “It was a day for us to get to know one another better, our missions, and to talk about potential areas for collaboration,” he said.

He anticipates St. Joseph’s downtown location will become a place for students in a number of Penn State Berks programs to do internships. Kinesiology students could work with individuals and families in the community to develop nutrition, wellness and exercise programs. Mechanical engineering students and faculty are already partnering with the kinesiology students to develop new methods of rehabilitation and ways to help people recover from injuries or strokes so they can become mobile again.

“There is a history there and a very strong interdependence,” he said. “I anticipate an equally strong relationship between St. Joseph and the Berks campus, which is larger and has more degree programs.”

“This will improve our shared capacity to improve health and education in the community, which have the potential to be wonderful steps in trying to address employment and poverty issues,” he said.

Key dates in the history of St. Joseph Medical Center