Students get their schools moving with wellness mini-grants

The students and staff at Lincoln Charter School in York are doing big things.

They are making the streets they travel safer while learning to be leaders.

Like many schools, they don’t always have the funding they need to do these big things. But Lincoln recently received grant money from the Pennsylvania Department of Health through Penn State Hershey PRO Wellness Center that has allowed them to do all of these things and more.

The Pennsylvania Department of Health recently provided funding through the Preventive Health and Health Services Block Grant from the Centers for Disease Control and Prevention to support both a Safe Routes to School and Capacity Building for Increasing Physical Activity mini-grant program. These mini-grants were developed and managed by Penn State Hershey PRO Wellness Center and address the need for increasing physical activity programs in schools and communities.

The center is a collaborative effort between Penn State College of Medicine’s Department of Public Health Sciences and the Department of Pediatrics at Penn State Milton S. Hershey Medical Center. The center leads statewide efforts to promote healthy eating and active living for children and their families through school programs and community outreach events.

Lincoln received a Safe Routes to School mini-grant as well as a Capacity Building mini-grant to support their initiatives.

According to PRO Wellness Center project manager Alicia Hoke, the Safe Routes Program not only focused on making active transportation like walking and bicycling to and from school a safer process but helped children get their recommended 60 minutes of physical activity per day. The Capacity Building mini-grant program was used to increase physical activity opportunities. An initial evaluation of the overall health and wellness of the school was used to develop programs to address their needs.

Lincoln realized a need for the funds through its involvement with the Hope Street Garden Project. The garden is located four blocks from the school and city officials needed to make sure the routes to and from the garden were safe and also to encourage children to walk to school.

“It’s a poor, urban area with not a lot of money to maintain it,” said Anne Clark, Lincoln community outreach specialist. “And suddenly there was an urgent need for something to be done.”

The school kicked off its efforts by participating in National Walk to School Day, where students and staff walked with their mayor, local police, and other city officials. 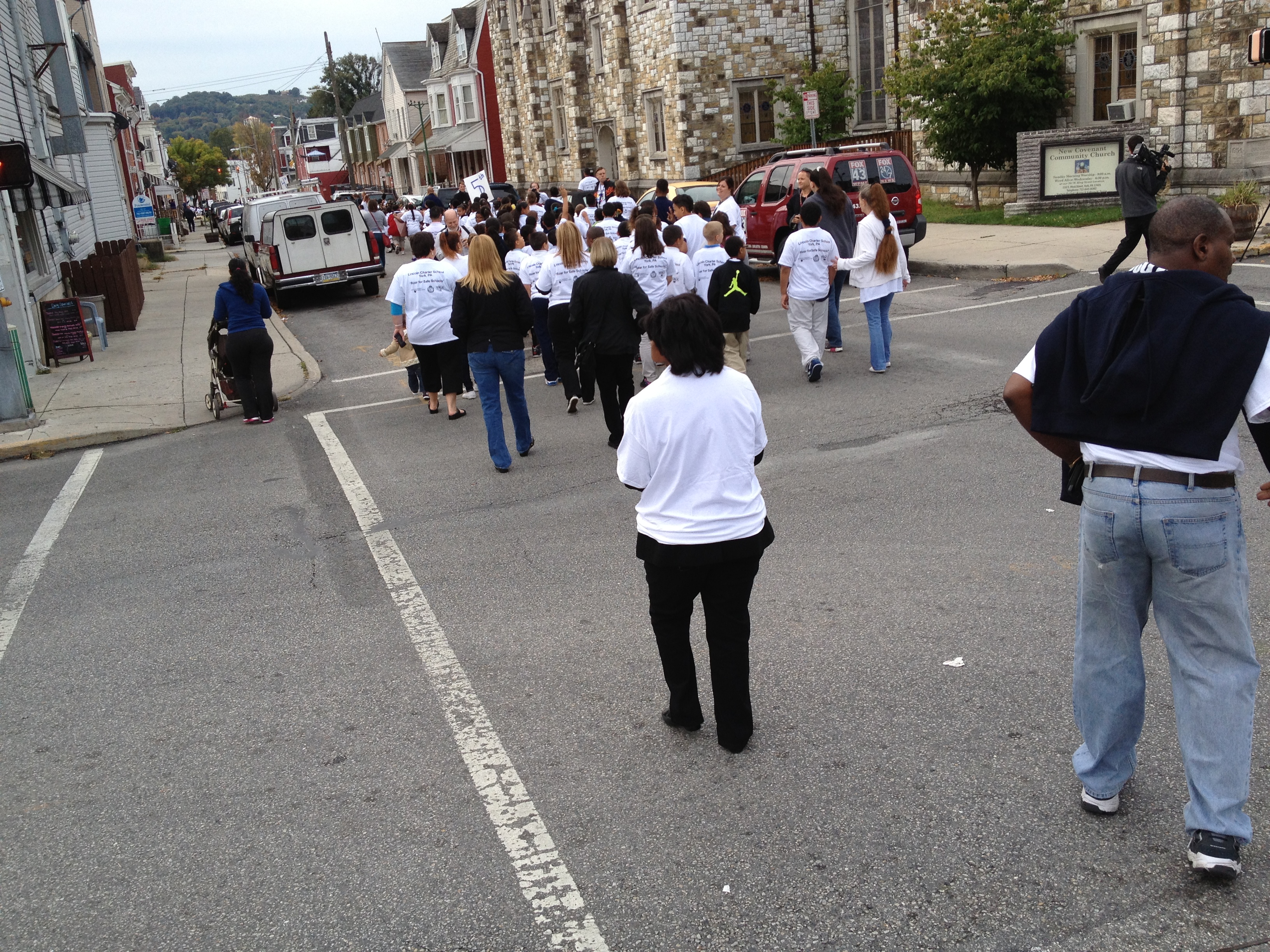 Students from Lincoln Charter School and community members in York, Pa.,during a Walk to School day students organized last fall thanks to a Safe Routes to School mini-grant from the Pennsylvania Department of Health and administered by Penn State Hershey PROWellness Center.

The walk made the community more aware of Lincoln’s students being in the neighborhood and has prompted residents and business owners along the route to watch out for the kids. Since the changes, student ambassador Nalia Bowie, a sixth grader, is not afraid to walk to school anymore. She used to cross the street when she saw someone she considered suspicious.

“With the safe routes, people know we’re from LCS,” she said. “They say ‘they’re from LCS, we have to protect them,’ so I feel safer.”

Some of the parents feel safer as well. 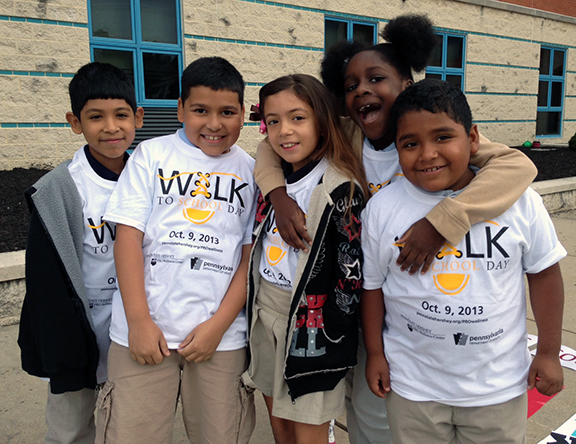 Students from Lincoln Charter School in York, Pa., during a Walk to School day they organized last fall thanks to a Safe Routes to School mini-grant from the Pennsylvania Department of Health and administered by Penn State Hershey PROWellness Center.

“I’m always cautious and worried about him walking, but I feel safer knowing that people are watching out for them,” said Andrea Hawkins, referencing her son, a Lincoln student.

Lincoln used its Capacity Building funding to buy safety equipment and a much-needed curriculum for its learning lab at Hope Street Garden.

“We’re city teachers and city kids, we didn’t know anything about farming,” Clark said. “We produced a thousand pounds of food. Not only are they growing it but they’re eating it.”

Lincoln’s efforts, through these initiatives as well as others, have gotten national attention from National Leadership Academy for Health. The Hope Street Garden and Learning Lab is being used as a model to share with other schools nationwide.

Lincoln recently chose a group of student ambassadors to represent its school. The students build leadership skills and are encouraged achieve their academic potential. They recently spoke at the Center’s Advisory Council meeting about the results they are seeing since receiving the funding.

“We’re healthy champions,” sixth-grader Muaaz Byard said. “We are educating the whole child: body, mind and spirit.” He explained that they are being educated through the programs and the community outreach and clubs and other opportunities that make Lincoln Charter School a model school.

Bowie likes that the students are generally given more opportunities to go outside.

“We went to the garden to do math class, and ever since our teacher lets us go outside to do more work, more activities outside, and more learning outside,” she said.

Lincoln students are not the only ones benefiting from these mini-grant funding opportunities.

With higher than average obesity rates at Bald Eagle, Snyder said it was important to get the students excited about safely walking or biking to school.

The staff developed and implemented a sticker chart rewards programs that allowed the students to earn t-shirts and bike helmets as an incentive to be active. They also encouraged activity breaks at school by walking laps during class time.

When members of Hansberry Garden and Nature Center realized students at John B. Kelly Elementary School in Philadelphia had only asphalt and a little grass in their playground and nothing to do at recess, retired teacher Dennis Barnebey worked with architects who work with nonprofits to change that. While the plan is impressive, the funding to implement the newly dubbed Kelly Green Project would not be easy to obtain.

In the meantime, Barnebey and the other committee members wanted to do something to make the playground functional. They received a Capacity Building mini-grant to support a structured recess program.

The school held a pep rally to introduce the program.

“The kids came in with energy and excitement that they were going to get to do things they hadn’t done before,” Barnebey said.

The school hired three interns who designed an active recess program that included soccer, basketball, jump rope, and learning Beyonce’s Let’s Move dance. They ended the year with a community event at the playground to show what had been happening and introduce the Kelly Green project plan. 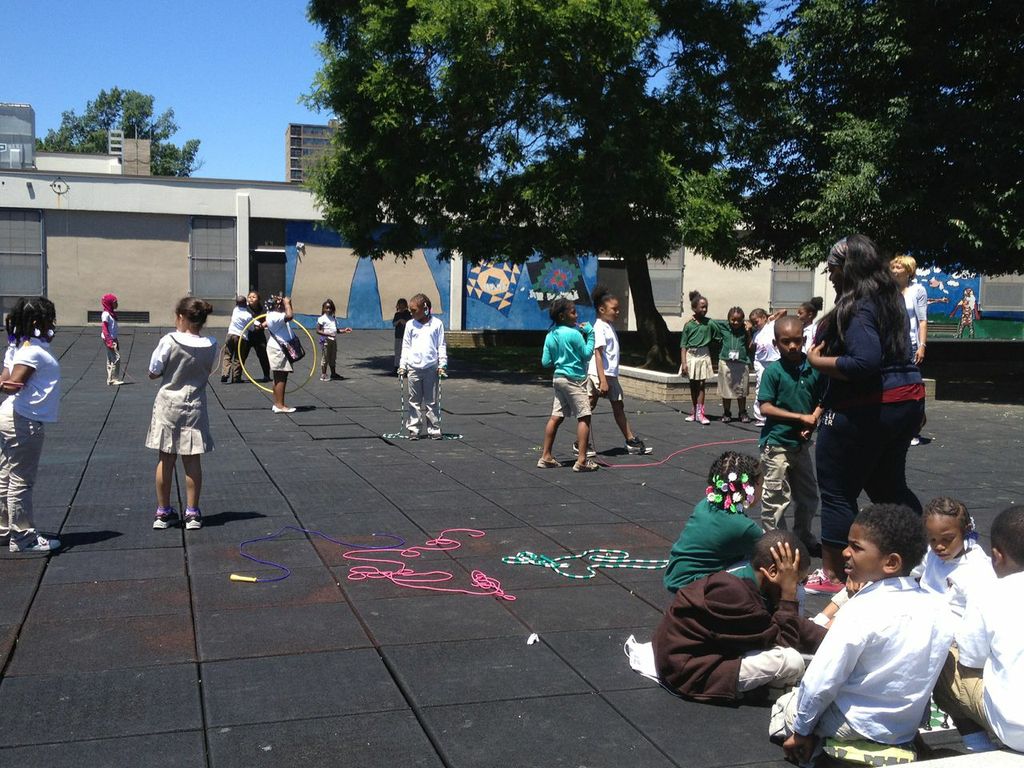 Students participating in John B. Kelly’s structured recess program, started thanks to a Capacity Building grant from the Department of Health and administered by Penn State Hershey PROWellness Center.

While their ultimate goal of funding the architect’s vision for the play space is still underway, the administrators and teachers saw immediate results.

“They said from day one they saw a difference in kid’s attitudes when they were coming in from recess saying ‘I had a good time,’” he said. “They saw a very different attitude in kids in the classroom.”

It also resulted in partnerships with other schools, a garden club, income potential in the form of plants to sell for Mother’s Day and volunteers to improve the grounds in the front of the school.

“It’s turned people’s eyes towards the school,” Barnebey said. “There’s a lot of good will and good energy about this.”