The best of both worlds: James Powell, M.D., combines his love of teaching and pediatrics 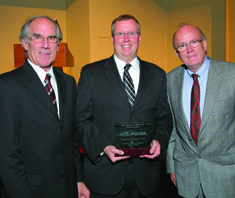 While growing up in Hazleton, Pennsylvania, James Powell M.D., ’92, knew he wanted to be a doctor from an early age. His experience with his own childhood pediatrician, Robert Childs, M.D. (also an alumnus of the College of Medicine as he completed his residency in 1975), was another deciding factor for Powell.

As an undergraduate and a College of Medicine student, Powell had the opportunity to shadow Childs and James Caggiano, M.D., ’77, at their Hazleton pediatric practice when he was home on weekends. This experience, along with the wisdom of his College of Medicine advisor, Cheston Berlin Jr., M.D., was influential in Powell’s decision to study pediatrics.

Powell received his undergraduate degree in molecular and cell biology from Penn State. Unsure of a specialty when he started at the College of Medicine, it was this background that ultimately led him to choose pediatric hematology/oncology.

He completed his pediatric residency at St. Christopher’s Hospital for Children in Philadelphia, followed by a fellowship at Duke University Medical Center in pediatric hematology/oncology.

In 2003, he returned to the Medical Center to work in the Division of Pediatric Hematology/Oncology. During that time, Powell was instrumental in starting a sickle cell disease clinic. He also spent time working with several satellite clinics, including Mount Nittany Medical Center in State College.

He served on the Penn State Alumni Association’s Alumni Council from 2004-2010 and the College of Medicine Alumni Society Board of Directors from 2005-2010, which was a way for him to give back and stay connected.

“It’s important for me to give back to the school that helped me get where I am today,” Powell said. “I’m glad I chose Penn State for both degrees since I received an outstanding education.”

Powell was hired by Centre Medical and Surgical Associates (now Mount Nittany Physician Group) in 2008 as a pediatric hematologist/oncologist and also as a general pediatrician.

In addition to being a member of the Mount Nittany Physician Group, Powell is also the Pediatrics Clerkship site director for the University Park Regional Campus. His solid connection with Hershey means he chooses to send a lot of patients there, which makes treatment and travel easier on both the patients and their families.

Powell gets the best of both worlds: “I still get to teach, which I love. I get to do some general pediatrics and stay active in hematology/oncology. It’s a good mix.”

“It’s come a long way in a short two years, and I see it continuing to grow,” Powell said. “It’s the perfect environment for learning community pediatrics.”