The medical journey that would lead Kaysee Kauer from Rapid City, South Dakota, to Hershey, Pennsylvania, began in the early morning hours of January 27, 2011.

“I woke up feeling like my whole right side was a charley horse,” the 38-year-old says. She stood up to alleviate what she thought was a cramp. But within seconds, the pain quickly escalated and it became clear she was dealing with something much worse. “I thought I was having a heart attack,” she says. 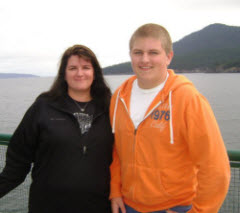 Kaysee Kauer and her son Dean.

Kauer beckoned to her 17-year-old daughter, Hailey, who called 911. Shortly after arriving at a South Dakota hospital, doctors told Kauer she had experienced a potentially fatal condition known as a pulmonary embolism: a “massive” blood clot had broken apart in her leg and migrated to her lungs.

In case more clots were still in her leg, doctors implanted an inferior vena cava (IVC) filter in Kaysee. The small umbrella-like filter has metal prongs that project outward to prevent clots from moving to the lungs by way of the IVC – the blood vessel that returns blood to the heart from the lower body.

About a month later, physicians in South Dakota decided it was time to remove the filter. But when they attempted to retrieve it, they discovered a complication: a small hook at one end of the filter had become lodged in the blood vessel wall.

After a procedure Kauer describes as “an hour and a-half of painful pulling and tugging,” the doctors told her they would not be able to remove the IVC filter and she would likely have to live with it forever. And in order to prevent the device from clogging with blood clots, Kauer was told she would need to be on blood thinners for life.

Within a couple weeks of Kauer receiving that news, her sister-in-law came across a website – www.removemyfilter.com – authored by Frank Lynch, M.D., professor of radiology, surgery and medicine at Penn State Hershey Medical Center. She forwarded the link to Kauer, who contacted Lynch. After viewing images of the filter lodged in Kauer’s IVC, Lynch said he was 70 percent sure he could get it out. That was all Kauer, a seasonal airline employee, needed to hear before cashing in one of her complimentary tickets for a flight to Pennsylvania.

Lynch says it was clear that removing Kauer’s IVC filter would not be a straightforward procedure. “But I had some techniques up my sleeve that I thought could assist me with getting it out,” he says.

The typical filter removal procedure lasts ten to fifteen minutes. Kauer’s was more complex due to the position of the hook in the vessel wall. But after more than an hour and a-half of putting his techniques to use, Lynch was holding the filter in his hand. Kauer, who was under mild sedation and local anesthesia for the procedure, remembers the instant feeling of relief she had upon being told the filter was out. Within days, Kauer was back in South Dakota watching her daughter receive her high school diploma.

Until retrievable models became available in the last decade, Lynch says IVC filters were not typically placed in younger and middle-age patients due to the risk of long-term complications. They include puncture of the blood vessel wall, pieces of the filter breaking off and moving throughout the body, and even blood clotting – the very condition they’re designed to prevent in the short-term.

Lynch notes the window of time during which a filter could be removed was once thought to be quite narrow – days to weeks depending on the design. After that it was believed that the filter would be so firmly entrenched that it would not be removable or surgery to remove it could cause serious damage. But now there’s a lot of evidence that, for many such devices, there are no such time limits for removing them, Lynch says.

Lynch, who has taken out more than 800 IVC filters over the last 10 years, says it’s especially important for retrievable filters to be removed from younger patients, as over time, the devices may pose significant risks and no clear benefit.

“There are a lot of young people out there with these devices inside them, and they’ve either not had the opportunity to have the filter removed or have been told it will never come out,” Lynch says. “But most of these devices really can and should be taken out to prevent long-term problems.”

For her part, Kauer says she’s extremely grateful to Lynch and his team. “If it wasn’t for them, I would still have that little piece of metal in my body that shouldn’t be there,” she says.