While a popular fixture of home aquariums, zebrafish have become a popular and important tool for studying human disease. The fish have more in common with humans than meets the eye, and provide an effective and efficient way to study genes.

The core provides the Penn State research community with a modern, centralized facility for housing, breeding and performing experiments with zebrafish, one of the fastest growing model systems in biomedical research.

“The embryos grow in Petri plates and are transparent so we can look directly at any cell in the body as it is growing. And we can do very fancy genome editing,” said Dr. Keith Cheng, faculty director of the core and distinguished professor of pathology.

By providing the means through which researchers can create mutations and watch what happens, zebrafish research has the power to transform what we know about – and what we can do about – human disease development.

“Genome editing in zebrafish is not new, but we didn’t have the good genome editing tools that we do now,” Cheng said. “Years ago, we could not even dream of doing what we are doing here.” 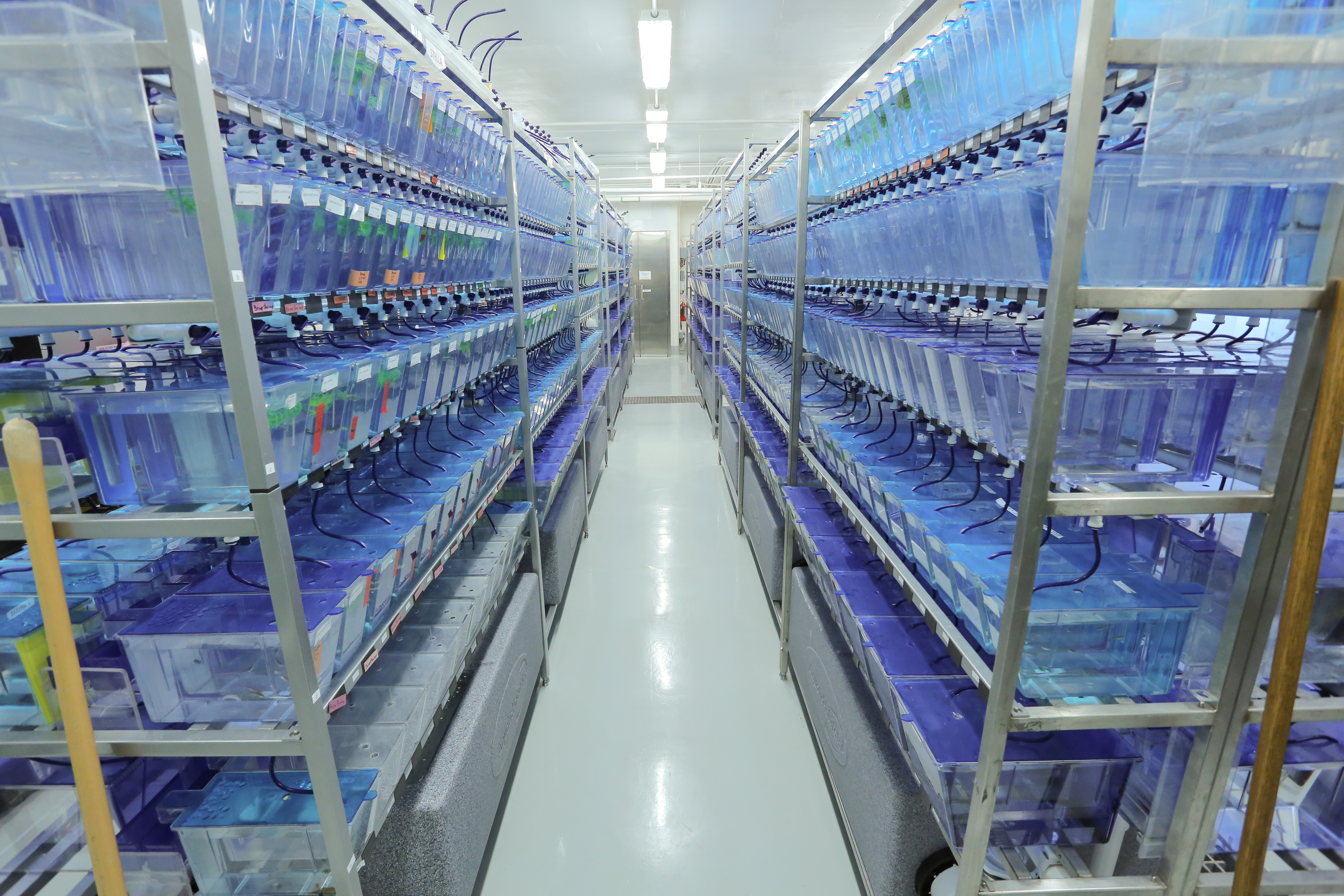 The Zebrafish Functional Genomics Core provides the Penn State research community with a modern, centralized facility for housing, breeding and performing experiments with zebrafish, one of the fastest growing model systems in biomedical research.

The future holds many possibilities, but, he said, “You can’t even be in the playground if you don’t have the tool. Now we do – an essential tool in the modern scientist’s toolbox.”

The state-of-the-art facility houses aquariums of a variety of sizes. There is also an isolated quarantine room and a health-monitoring program that analyzes fish for the presence of pathogens that may otherwise lead to misinterpretations of research results.

Just one look at the words describing the instruments and processes available at the core – terms like  Eppendorf FemtoJet microinjectors, fluorescence stereomicroscope and planaopochromatic objectives – is enough to make the eyes of the non-scientific glaze over. But the goal of the research is one any person can understand: to save lives.

“The opening of this core offers to our faculty a space to do research without having to design or build a facility or take care of the fish – we have done and do all that for them,” Cheng said. “We provide microinjection equipment, imaging equipment and care for the fish, which we typically breed ourselves.”

Researchers and their students from the areas of personalized medicine, neurology, genomics and more will be using the new core, Cheng said.

Besides their transparency, zebrafish, native to South Asia and Southeast Asia, are a useful model for other reasons.

They are an economical alternative to mice and produce hundreds of offspring at weekly intervals, providing abundant embryos to study.

“The embryos grow rapidly and most of the organs appear within 36 hours of fertilization,” said Dr. Khai Chung Ang, the scientific director of the Zebrafish Functional Genomics Core. “Within 48 hours, the fish move about and in five days they are completely mobile. They reach reproductive maturity around three months.”

And, it turns out; the fish are a lot like people. Humans and zebrafish share 70 percent of the same genes and 84 percent of human genes known to be associated with human disease have a counterpart in zebrafish. Major organs and tissues are also common.

Zebrafish genome has also been fully sequenced to a very high quality.

A common approach scientists use to learn what a gene does is equivalent to pulling out a car part to see what it does, Cheng said.

“For example, when a car’s steering wheel is removed it may only go in one direction,” he said.  “Since it is unethical to modify random genes in humans, we use model organisms in which the function of one gene is ‘knocked down’ or ‘knocked out.’ As a result we can create mutations in any gene. Researchers can watch the result in mutant embryos, sometimes into adult life stages.”

One project that Cheng’s own lab is using zebrafish for involves human pigmentation. The results are unlocking one of the deepest human mysteries: the origin of the human skin colors.

“This work also relates to the unknown basis of the 15-to-20-fold increase in sun-induced melanoma susceptibility in Europeans,” said Cheng, who with Ang, has traveled to the Caribbean for sampling the DNA and skin color from the last remaining Amerindian tribal community – that of the Kalinago of Dominica.

With help from bioinformaticist Victor Canfield, Zebrafish Core Technical Director Sarah Arnold-Croop, Cheng and Ang are studying genes they identify as being possibly involved in the origin of the lighter skin of Amerindians, which the Cheng lab thinks will be shared with their ancestors of about 15,000 years, the East Asians, Ang said.

“Once we know about one or more of those genes, we will begin to be able to understand why European skin is so much more susceptible to cancer than African or East Asian/Amerindian skin,” Ang said.

Aside from finding common mutations among fish and humans, scientists can find drug candidates in zebrafish models of human disease. The Cheng lab has contributed an important tool for confirming DNA changes that may be responsible for human disease – a goal shared with the Institute of Personalized Medicine directed by Dr. James Broach.

An exciting new research tool available to Penn State researchers is an imaging capability that the Cheng lab calls Pancellular Tissue Tomography– a high-resolution version of a CT scan that can create whole-animal images of zebrafish that allow identification and study of every cell in the animal.

“While the fundamental principles of this imaging are the same as human CT, we have achieved a 1000-fold greater resolution, allowing us to evaluate the potential effects of disease caused by genetic and/or environment on any cell type in any tissue in the whole animal.” Cheng said. “The way we are planning to handle the data will allow scientists using the system to be able to learn from each other, which will allow new synergies that will enhance scientific discovery and increase research collaboration and transparency at Penn State and globally.”

The $1.5 million Zebrafish Functional Genomics Core is funded, in part, by the National Institutes of Health and the Pennsylvania Department of Health using Tobacco CURE Funds. Additional support was generously provided by the Jake Gittlen Laboratories for Cancer Research and the Departments of Pathology, Neurosurgery, Pediatrics and Neurology, and the Institute for Personalized Medicine.