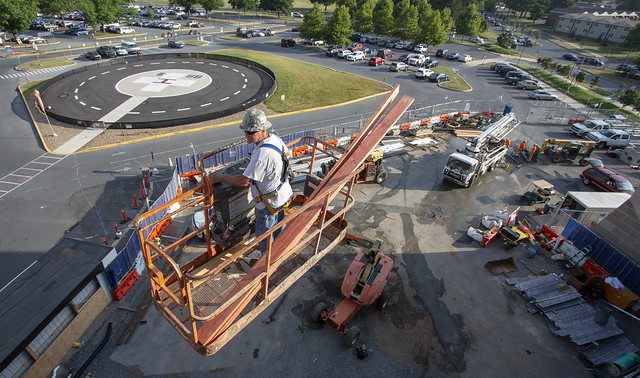 Penn State Health is moving forward with significant construction and renovation projects on its Milton S. Hershey Medical Center campus that will allow it to better meet the health care needs of the community and create greater opportunities to advance biomedical and health science research and education.

Unprecedented expansion projects. New leaders at the helm. Continued gains in quality of care and research funding. These are all marks of a period of remarkable growth and transformative change occurring at Penn State Health’s flagship hospital, as presented today by Deborah Berini, president of Penn State Health Milton S. Hershey Medical Center, during the hospital’s annual public Board of Directors meeting.

Many of the highlights Berini shared demonstrate how Milton S. Hershey Medical Center and Penn State College of Medicine are helping Penn State Health evolve into a health care system that serves south central Pennsylvania and beyond, as well as their continued commitment to not only exceptional patient care and community outreach, but the innovation and training that furthers treatments of a variety of diseases.

“In the nearly one year since I came to Hershey, what has left the strongest impression on me are the people who work here,” Berini said. “Not a day goes by where there isn’t a story about our people going above and beyond for our patients. Their approach to work defines who they are as individuals, but it is also an essential component of who we are and what we do as Penn State’s academic health center.”

Ongoing construction projects on the Hershey campus are moving forward to accommodate the demand for the high-quality, advanced care Hershey Medical Center provides. The Penn State Children’s Hospital expansion project, which will add three floors to the existing building, is on track to be completed in the fall 2020. This expansion will move the neonatal intensive care unit (NICU) and women’s health service to the Children’s Hospital, as well as create additional space for patients and support. Toward the end of fiscal year 2019, emergency medicine leaders opened the first phase of the Emergency Department expansion. The expansion project, expected to be finished in the summer of 2020, includes additional exam space, state-of-art operating rooms and support space. Off campus, Penn State Health broke ground on a new adult acute care hospital in Hampden Township, and announced plans to build another in East Hempfield Township.

Hershey Medical Center is always striving to improve the quality and safety of its care. Fiscal year 2019 again demonstrated high overall outcomes and patient satisfaction, as well as recognition for many key programs, including:

Hershey Medical Center also demonstrated its commitment to enhanced access to patient care and transparency for health consumers with the expansion of telemedicine programs and the launch of an online pricing tool. The Medical Center’s telemedicine programs, including tele-dermatology and tele-psychiatry, bring exceptional care to the patient at a place and time convenient for them. Its Tele-ALS program is one of only three in the country. A new online pricing tool gives patients the information they need to make informed health care decisions.

Medical Center and College of Medicine researchers earned more than $98 million in external research funding in fiscal year 2019. This money supports efforts of faculty and staff to do meaningful scientific studies into the causes, treatments, cures and prevention of disease. Examples of the lifesaving research underway supported by these dollars include:

Tim Card, a father of seven from Lancaster County, made history at Penn State Cancer Institute in fiscal year 2019 when he became the first patient to undergo a cutting edge treatment for an aggressive form of cancer, chimeric antigen receptor T-cell therapy, or CAR-T cell therapy. The Cancer Institute is the first and only health care facility in central Pennsylvania to offer this lifesaving treatment to adult patients with lymphoma who have exhausted all other options.